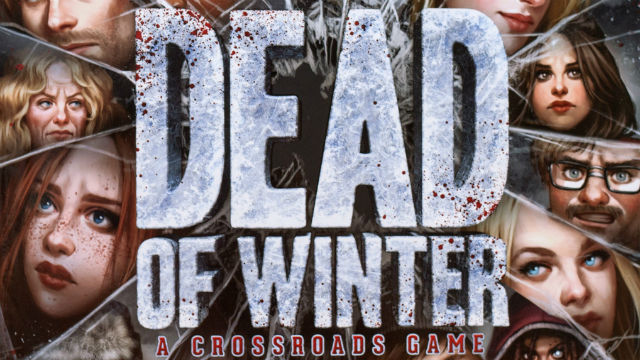 Hidden traitors are an under-used and under-explored game mechanic. This may be because the formula was near-perfected by Battlestar Galactica back in 2008. A slight clumsiness around traitor selection, complex rules and a 3-hour play time were the only significant downsides.

Dead of Winter is a very obvious love letter to BSG, which attempts to fix its shortcomings. Taking on such an acclaimed game and trying to improve on its formula is a tough proposition. Dead of Winter succeeds … most of the time.

The title is based on the hackneyed zombie apocalypse, with added snow. It’s path trodden smooth by the passage of too many previous games, but the upstart succeeds in carving out a niche for itself. The setting is well realised with good component and evocative mechanics. Every time a character moves without fuel, they risk exposure to frostbite and worse: the hungry dead lurking in the darkness. With potential peril at every action, play exudes a real sense of risk.

Each player has a team of two survivors, which can increase as strangers arrive at the colony, and decrease as they succumb. These teams must pull together to achieve a randomly selected goal such as stockpiling food and weapons for escape, or to fully barricade the colony. This is in addition to basic survival: each turn, surviving colonists must be fed, waste cleaned and the growing herd of zombies culled. Failure to do these things results in the whole group losing.

But this isn’t the co-operative game it sounds to be. All the players also have secret individual objectives they need to fulfill as well as the group goal. It might be to stockpile food, or to be in charge of the most survivors. So even if the main objective is met, few, if any of the players will win. Some of these objectives, however, let the player win if all the other players lose. So there may be one or more traitors in the mix: or there may not.

This uncertainty drives the Dead of Winter experience. There’s a very similar crisis mechanic to BSG. A new one is drawn each turn from a bland, identikit deck, and cards are played faced down to try and accumulate enough of a resource like food or fuel to avert it. Putting in the wrong kind of resource counts negative, allowing betrayers to wield their nefarious influence.

Cunning players can use the possibility of no traitor to make it look like everyone is pulling together, before springing a trap at the last minute. The struggle to balance ongoing crises against fulfilling the basics is tough enough to make this work as a co-op. The threat of treachery on top makes for a taut, challenging game.

To get more resources for survival and warding off crises, players must move around locations like the school and store. Each has its own deck of cards, so medicine is a more likely find at the hospital, and precious weapons can be turned up at the police station. 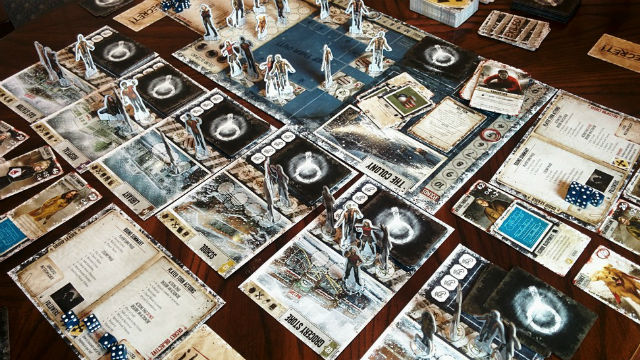 The core game mechanics take up only a few pages of simple rules. Length varies with the objective, between about 90 minutes and four hours. But you know what you’re getting, because the goals are divided into short, medium and long play times.

There’s an amazing amount of narrative and excitement brewing inside this compact framework. There are downtime issues as the player count increases, but there’s always plenty to argue and discuss. There’s enough information to make informed guesses, but rarely enough for certainty. There’s also the addition of the crossroads deck, events that are drawn by someone other than the current player, and which can trigger depending on what actions are taken during the turn. It’s tight, lively and engrossing.

So what’s not to love? Almost inevitably for a game so light on rules, yet so reliant on social interaction, the mechanics sometimes collapse under the weight of all the arguments.

The worst examples are all related to secret objectives. Which is a shame, seeing as they’re one of the games’ main unique selling points. Some of them are much harder than others. So if you’re dealt one of these, or you see it drifting out of reach, it’s tempting to try and get yourself exiled. This is the rule that allows the group a vote to get rid of suspected traitors: anyone kicked out gets a new “exile” objective. That’s an attractive proposition if your own is out of reach, but succumbing to temptation is gamey, and breaks the implicit social contract of the table.

There are also many occasions when a sudden tweak by a traitor can completely put the game out of reach for everyone else. That would be find if it could be planned for, anticipated, maybe mitigated against. But in reality it’s just a twist of fate and timing. It can be very frustrating to suddenly find the game collapsing around you through no fault of your own. More so when anyone with the good fortune to have a betrayal card is the beneficiary.

How badly these issues will affect you is dependent on your group. It’s a game that very much demands to be approached a certain way, to be played as a shared experience rather than by the strict letter of the rules. Of everyone understands that, and can be trusted to uphold their end of the bargain, it works most of the time. But just one player who wants to exploit the loose rules framework in search of a win can ruin it for both themselves and everyone else.

READ ALSO:  Next up for Marvel Pinball- Captain America

I find the game entirely worthwhile in spite of these flaws, especially if you stick to the short objectives. Cramming so much thrill, so much debate into ninety minutes once everyone has the rules down is an incredible draw. And if the rules let you down, well, it’s only ninety minutes lost, most of which were still pretty exciting. As the playtime stretches, you find yourself wishing you’d picked BSG instead. But if, like me, three hour gaming slots are in short supply, Dead of Winter is a fantastic boon, and an often cracking game.

3 thoughts to “Dead of Winter Review”