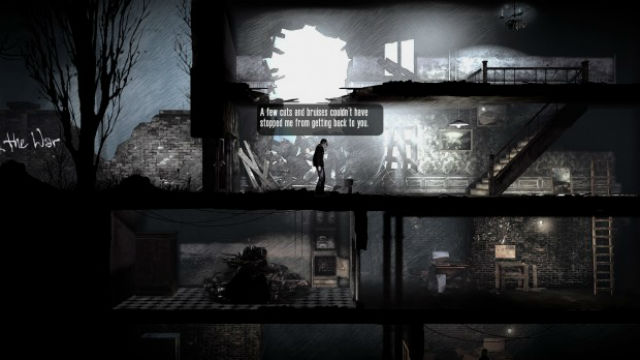 They say that civilization is only three meals away from barbarism, but I managed six. After two days without food, I stabbed an elderly priest in a fight over carrot and then fled in terror from his avenging friends. As if I didn’t feel bad enough after that, This War of Mine informed me that the carrot did nothing to assuage my gnawing hunger.

It’s very much that kind of game, where you’re damned whatever you do. It loses no opportunity to ram home the bleakness of its setting, the trials of three civilians trying to survive in a war-torn city. Sometimes, its solemnity tips over the edge into parody. But mostly it traps you in a vice between compelling gameplay and the tragic consequences of your decisions.

You spend the game in a variety of buildings. During the day, it’s your hideout in a ruined house. The first job is to strip the building of accessible raw materials. Then you c

an use what you’ve found to build things like shovels and crowbars to get to other parts of the house to ransack. When you’ve stripped the place clean, you can start to construct the rudiments of living. Furniture, water stills, stoves, heaters, basic medicine and so on. There’s a substantial technology tree to explore, and a diverse range of threats that need to be headed off.

Doing anything in the game requires clicking on an interaction point, then waiting while a brief timer ticks down as you complete the task. It’s obvious enough where you can click, although the icons used to denote what you can do there take a bit of getting used to. With such simplistic core gameplay mechanics, things are in danger of getting a bit repetitive. And during that day, it can feel that way, although you’ll sometimes be interrupted by strangers wanting to barter, or looking for help. The night, however, is a different matter.

After emptying your shelter of resources, the only way to gain more is to scavenging in the surrounding locations. You can only do this at night: it’s too dangerous during the day. The side on view is transformed into a two-dimensional stealth game with passing similarities to Mark of the Ninja. You must creep through your target building, looking for loot and hoping you don’t encounter hostile inhabitants. Sounds in the darkness are represented with expanding circles. It could be a rat. It could be a fellow scavenger. It could be an aggressive bandit with a gun.

These forays out into the ruined city thrum with tension, because you never know what’s out there. That abandoned garage you’ve chosen to loot could be empty, or crawling with dangerous inhabitants. You’ve no way of knowing when you set out. I once arrived at a school, desperate for supplies, and was horrified to find others already picking it over. I waited outside in the cold for the chance to sneak in unseen and grab a few meagre scraps, when an armed man came out to stand guard. “Hey you!” he shouted, and my heart was in my mouth. “There’s plenty for everyone,” he continued, and I don’t think I’ve ever felt more pathetically grateful to a bunch of pixels.

It’s imperative that you have a successful night because the game doesn’t hold any fake concepts of balance. Life in This War of Mine is nasty, brutish and short, and the game is designed to teach you the grim reality in short order. If you want to build tools or repair your walls, the raw materials can be pulled from piles of rubble everywhere. But daily essentials such as food and medicine are like gold dust. Their rarity doesn’t stop your characters getting sick, or hungry. So sick and hungry they go, their despair showing in lethargic animations with heavy limbs, until they die, or you’re able to find or trade for what you need. Having to trade a whole stash of jewellery for a single tin of food is a painful demonstration of what’s really valuable in life.

This is the opposite of how a strategy game should work. You should have hints about the outcome of your actions, be able to make plans, organise things to gain advantage over the game. This War of Mine gives you little beyond the obvious, like knowing an empty, ruined shop is a safer and more productive scavenging location than an occupied church. But nothing is certain. And as you charges become exhausted and famished, you become desperate enough to risk anything in the quest for sustenance.

Sometimes, scavenging offers horrible vignettes of life under occupation. Once, while looting a burned-out supermarket I had to hide behind shelves and watch as some soldiers dragged off a defenseless woman. They had guns and I had nothing. What else could I do? But just like the lack of food, the game punished me anyway, infecting my protagonists with despair about their inability to help others in need. If they get too morose, they’ll commit suicide. This is not a game to play for laughs.

The sombre tone is reflected in the excellent artwork. While not a graphical powerhouse, the muted palette and distinctive pencil-drawn style suits the mood. The sound design is spartan with little more than the odd sound effect over the music. But it works. The sudden warm crackle as you turn on the radio offers a little glimmer of hope in the ruin of normality.

As a veteran strategy gamer, I have burned a thousand cities in my time with never a thought for the suffering of the inhabitants. After playing This War of Mine, I doubt I’ll ever play a wargame again without wondering about their fate. Mechanically it’s perhaps a little too bare bones and repetitive. But in terms of theme and narrative, it’s an absolute triumph.