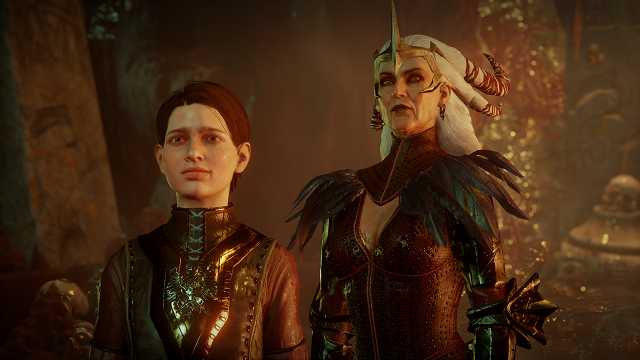 Dragon Age: Inquisition is not a game that feels like a failure. It’s got a world’s worth of stunning environments to explore. Its characters are universally layered with compelling and cliché-defying personal story arcs. The combat can get tedious, sure, but it’s a soundly designed system with some bonkers dragon fights. And certainly it has sold. Yet the game still fails and it does so for the very same reason Mass Effect 3 failed — it doesn’t stick the landing.

Lest I give the impression that I’m picking nits over nonsensical cut scenes and weird star children, my problem with Mass 3’s ending was largely quite different from everybody else’s. I’m not talking about denouement. I’m talking about climax and how it relates to the rest of the game. Star child was incomprehensible, sure, but he’s not what made Mass 3’s climax bad. Likewise, the lackluster final confrontation with Corypheus isn’t what tanks Inquisition either.

The key to a memorable and satisfying ending isn’t the implication of what happens after the camera fades to black or even whatever tedious boss battle kicks it into gear. It’s the question of whether or not it fulfills the promise set up by the rest of the game. Like Mass Effect 3, Inquisition is a game that beats you over the head, telling you over and over that it’s about team and coalition building. You face a threat that requires uniting disparate factions and disparate people to face a common foe. You dare not face it alone or you’ll be too weak. So you spend a good 100+ hours working your way through the world and sending lackeys on assignments in the name of building a better, stronger Inquisition.

Cool. Cool cool. Shouldn’t it follow, however, that when you reach the final stage of events that the strength of your Inquisition should, oh I don’t know, matter? At least a little?

With the possible exception of Baldur’s Gate 2, a game so far removed from modern Bioware as to not be particularly relevant, I’ve long thought Mass Effect 2 is the best game Bioware has ever produced. (KOTOR also rattles around in there somewhere.) Yes, it’s slick in the way that all Bioware games are, but it also sets you up with a promise — this is a game in which you must build a team and the better, more united your team, the more likely you are to survive. And then, upon passing through the Omega 4 Relay, it does exactly that.

There is plasticity to Mass 2, make no mistake, and it’s not particularly difficult to solidify your team and ship merely by doing everything and gaming the dialog system. That’s not what really matters, though. What matters is that if you don’t do those things, your ability to succeed is diminished and you put your crew members at very real risk. Not so with Inquisition.

Emprise Du Lion. The Hissing Wastes. The Western Approach. The Forbidden Oasis. The Emerald Graves. You can devote a hundred hours to exploring every nook and cranny, resolving every little quest. Is there one thing that happens in any of these areas that is of consequence to your confrontation with Corypheus?

Not really, no. And that might be okay if the game didn’t explicitly tell you that there is. If it did’t tell you, “Hey, you’re out there making your Inquisition better.” But it does tell you those things. Repeatedly. So, what the hell am I doing out there beyond spinning my wheels and admiring the visuals? I’m like Charlie Brown with the football over here.

Ditto, the War Table. If I complete the Hard in High Town War Table questline in Inquisition, I get a nifty, if rambling bit of story, Varric’s approval, and maybe a bit of useless swag. Inquisition quests are full of useless swag, not to mention excess Power points that you’ll never need. And it’s not that none of these missions are compelling. I mean I like me some Varric, particularly in this iteration. But when you’re told, “Hey, if we find out Corphyeus’s real name, it might weaken him,” I expect a successful conclusion to that quest to result in me having some kind of advantage over Corypheus; at least at some point and in some way, even if it’s only barely consequential. What I get instead is a Master Spirit Rune. It doesn’t even have his name engraved on the back or anything! 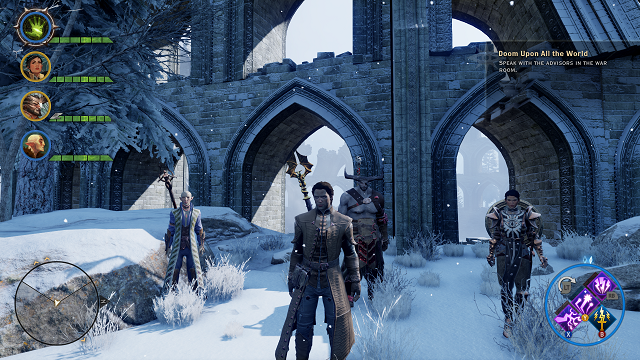 Looking through wikis of every War Table quest in the game, it’s not clear that a single one of them, beyond the mere act of completing a handful that are directly tied to plot progression, affects your ability to win the game.

Just as bad is the lack of practical impact the state of your companions has on the game. Again, through the use of approval ratings (which are reflected, sort of, in each character’s Tarot card), your companions evolve over the course of the game. The implication is that if you can keep them happy, they’ll be more stalwart and trustworthy to your cause. You’re meant to ask yourself, “If I do something that wildly upsets Vivienne, will I be able to trust her if I have her with me when it all goes down? What might she do to further her own ends at my expense?”

You needn’t bother worrying. Sure, you could piss someone off so much so that they’ll just leave the Inquisition, but as long as they’re still in the Inquisition, you can call on them whenever, for whatever, and they’ll perform exactly the same.

Again, compare this to Mass 2, where if you don’t upgrade the Normandy’s shields, weapons, or armor, people in your crew will die. During the sequence following entry into the Omega 4 relay, who you assign to do different jobs also matters. Assigning Miranda to use her biotic powers to protect the group while you fight your way deeper into the base produces less desirable results than having Jack do it. Why? Because the game has made clear that she’s the more powerful biotic. And Jack, herself, will do the job more capably if you’ve earned her loyalty. If you have Grunt protect Normandy crew members you send back to the ship, he perishes where a better leader would survive. The amazing consequence of all this being that I’m forced to think like a leader trying to survive when I’m choosing who to bring with me. Who I like personally, or am snogging, is irrelevant.

It’s a shame that, after so many games, not only is Bioware not making forward progress in the realm of choice and consequence, they’re actively taking steps back. It doesn’t erase the fact that Dragon Age: Inquisition has a lot of wonderful pieces, some of the best work Bioware has ever done, but when you create a game about coalition building, about leading, and the choices you make as a leader simply don’t matter, then you have failed. For Bioware, it’s the continuation of an unfortunate trend.