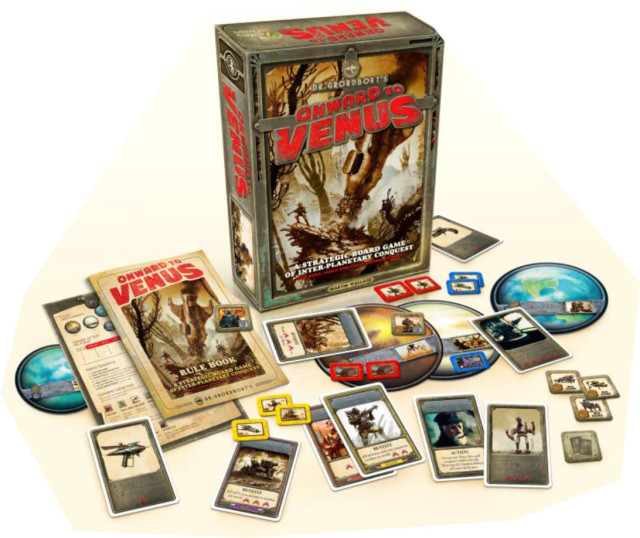 There are two new games out from Martin Wallace’s homegrown imprint Treefrog and I will be covering both with Onward to Venus up first. The other is Mythotopia, a sort of redevelopment of his earlier hit deckbuilding war game A Few Acres of Snow, but this time without the dreaded “Halifax Hammer” exploit and a very lightly applied fantasy setting. Spoiler, I like both games. And both definitely have that Wallace touch- meaning that they have elements that feel oddly underdeveloped given the designer’s talent and attention to thematic details.

Onward to Venus loses points with me right out of the gate as it is set in a “steampunk” world that would likely just upset and confuse Jules Verne or HG Wells. The game is based on some graphic novels that I, a comic book reader, have never heard of but I’ll hold neither ignorance nor my negative reception of all of those brass fittings and goggles against the game. Because what comes in this rather modestly produced (but nicely illustrated) package is quite a neat little game with some cool ideas.

The concept is that the 19th century imperial powers are extending their colonization (and exploitation) efforts beyond earth, sending rocketships full of infantry and occasionally tanks to our solar system’s planets and moons. Once at a destination, they drop down and lay claim to mines that generate resources, set up factories that produce more ships and tanks or pick up useful resources. Or, they may choose to keep a crisis in check. The winner at the end is determined in a sort of variation on area control, this time out each planet doles out points based on which of the empires is generating the most revenue there counted in terms of what each mine and factory are capable of cranking out. These facilities are also what provide coin for your army-building efforts.

The core process is very simple and appealing. You get to do two things from a menu of possible actions, with the primary choices being moving (transporting troops and ships in orbit around a planet to another) and claiming a tile (sending troops and ships from orbit down to a planet to take something over. The tiles represent all of those mines, factories, crises and other benefits and there is a certain racing aspect to claim to the good ones.

There is resistance, but it’s handled in a novel way. Neutral tiles often have a defense number on them. When you move to take one over, you roll three special dice, throwing out the middle result. The difference is added to that defense number, which represents how much strength you have to deploy to claim the tile. Those dice also have a skull icon, which means that you can take up to three casualties in your endeavor. PVP can only happen if a “Tension” tile is among the mix on a planet, which earmarks such areas as potentially dangerous- if you don’t have enough materiel there to defend your holdings. PVP is also handled by rolling those dice to arrive at a “cost” for winning a battle.

There is also a giant stack of action cards and each empire has a set of four starter cards that add a little flavor for each. There are weapons (more brass fittings) that can add strength points to a combat attempt. There are many personalities, from the comic book I presume, that enhance actions, give you free money, blow up somebody else’s ship and so forth. As is the case with everything in this design, there’s nothing too complicated or too fancy. It’s all very straightforward and rather fun-first instead of complex.

READ ALSO:  Cracked LCD- There will be Games HD part 3- I Built My Dreams Around You

So it turns out that Onward to Venus is another Wallace-ian kind-of-Dudes on a Map game, even though the geography is interestingly enough, completely linear to reflect the giant scale of the solar system. It’s also kind of a bizarre worker placement concept, because when you move units down to a planet to claim a tile, they are locked up until the end-of-turn reset. All of the above would be a decent enough game as written, but there is another element that almost makes it brilliant. Sadly, it is a Wallace design and it is also the part of the game that would be analog to the batter-y center of an underdone cake.

Remember those crisis tiles I mentioned? These are tiles that come up in the mix that players can claim for a VP each by beating the target number plus die roll, as is the case for all conflict in the game. At the end of each round, these are counted up for each planet and there’s a die roll. This determines the crisis level of the planet or moon. If it escalates, really awesome narrative stuff can happen that can hurt- or help- the empires that have holdings on that planet. Indigenious Venusians can rise up to thwart their colonial interlopers. Martians can invade earth. Pirates raid holdings on Titan. Aliens from outside the solar system can invade from the Kuiper Belt. All of these looming threats give the game a grand sense of scale. If they ever happen.

The kicker is that the crisis level on a planet has to actually go up for these things to happen, and in my experience playing the game with three and four players (it goes to five) it seems like the really cool effects never seem to trigger. It could be that the players I’ve played with have just jumped on the crisis tiles without thinking that it’s best to leave some to possibly escalate, potentially damaging other players. Or it could be that the mechanic that activates them doesn’t quite work as frequently as it should since it relies on a tile mix, die rolls and player activity. And since the game is fast-paced and ends after just three rounds, there often isn’t a chance for them to trigger.

From a design perspective, I can see where they are intended to function almost as a cooperative element in the design- “we’ve got to stop the Moon Men!” But instead of an opportunity for the imperial leaders to pause for a moment to consider the Greater Good in the face of a pending threat to all, they seem to just fizzle out before anything happens. That said, when they do happen, it tends to be a major event in the game, which may include completely taking a planet out of the game. There just doesn’t seem to be the right balance between having them be these really exciting, potentially devastating situations and having them happen enough to make them a real threat.

As written this part of the game feels like underdeveloped potential. Yet even without the crisis part of the game running at 100%, it’s a good one overall with a good mix of drama, economics, development and battle. I really like the dice system and the cards keep things a little wild and unpredictable. The tension tiles are a cool idea that keeps the game from turning into M.A.D., regulating PVP in a thematic way. Simple, appealing and overall a success that shows the more rambunctious side of Wallace- meaning that those looking for something like Brass or Age of Steam might be disappointed.