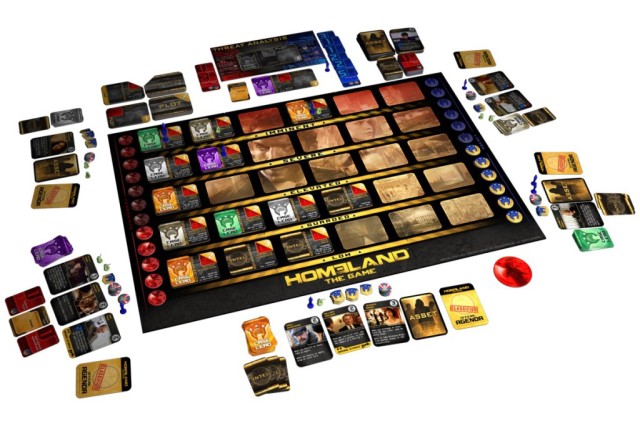 I’m going to skip the usual “Gale Force 9 is so great” preamble and cut right to it, their new release Homeland is the first great game of 2015. It is a title that anyone still playing Battlestar Galactica or caught up in the current trend in simpler social deduction/treachery games should seriously look into purchasing for their group. As with all of GF9’s past releases, Homeland is based on a television series but that doesn’t really matter. The design team- also responsible for Spartacus, Firefly and Sons of Anarchy- understands that theme isn’t just pictures and text on cards. It’s what the gameplay represents and how it represents it. If, like me, you’ve never seen a single minute of the titular show it does not matter. What matters is that it is a stunning espionage game rife with suspicion, paranoia and selfishness in the ostensible name of national security. What’s more, the theme of information- acquiring it, exploiting it, manipulating it and fabricating it- comes across as strongly and as profoundly as any other theme I’ve ever seen in a board game.

Homeland is squarely about strategic intelligence and counterintelligence in the age of global terrorism as well as the motives of CIA agents operating in this uniquely 21st century, Information Age battlefield. Each player represents an analyst tasked with investigating and assessing threats from various individuals and organizations as they emerge. As Case Leads, they also have authority to request additional assets, field agents and even Special Forces to attempt to gather enough intel to counter various plots against the United States.

There are the makings of a good co-op game right there. There is a very “now” real-world setting instead of the usual gamer tropes, a compelling storyline and a high stakes tone. But Homeland isn’t just another whack-a-mole co-op. And that’s where this game becomes great.

Each player receives a secret agenda card at the beginning of the game. The Agency player wants to prevent terrorist plots from triggering and earns points at the end for Reputation tokens, earned chiefly by stopping the bad guys. Their goal is effectively to move up in the ranks of the CIA and maybe they are the true good guys in all of this. The Terrorist Mole is looking to bring those terror plots to fruition. If enough get past the CIA and they have enough impact, the terrorists and their moles win. That is, if the moles make it through an awesome endgame step where the players may attempt to call out another player as a terrorist sympathizer. Get named, flip your card, and if they’re right about you being a mole then you lose. Even if you were winning, so subterfuge and playing close to the vest are essential. There is no mid-game traitor reveal.

But there is also a third agenda. The Political Opportunist player is effectively playing both sides of the game, earning Clout points for their “noble” efforts in combatting terrorism even when plots are successful. These are the kinds of operators that benefit from strife, toeing the line between outright villainy and simple greed .They also earn points for Clout tokens at the end of the game, but if the terrorists win they also lose. This agenda is about walking on a knife’s edge, watching for moments where you can throw off both the Agency and the Moles to your advantage. There may be multiple moles in a game.

This three-party tussle is very reminiscent of an old Avalon Hil title, Guerilla, where you also had two rival sides and a spoiler in the middle with secret identities all around. But more significantly, Homeland draws its main inspiration from Corey Koniesczka’s brilliant Battlestar Galactica- the original game, not the over-expanded mess it turned into later. This design takes the core crisis card mechanic of that game and removes all of the chrome-y fluff and filler such as the space battles, room effects, multiple threat dials and so forth and turns into a game strictly about the secret cardplay. It’s leaner, but it is also less cluttered and more focused on the theme of intelligence gathering. There is a big stack of asset cards that players can buy representing characters from the show and a host of special abilities, but everything is in the service of expressing the intelligence theme rather than adding fan-level detail.

The threats are put on a large board that looks like a bank of monitors with rows representing the level of urgency. The threats advance up the board each turn and are analyzed when they go off the top. Each threat is comprised of a hidden plot card, which indicates the nature of it as well as its level of complexity and potential impact, and a face-up group card which has a sophistication value indicative of the group’s ability to plan, mount and execute an attack. The first player takes on the Case Lead role of the threat placed at the beginning of each round. On a turn, you must play one intelligence card- which is either blue for the agency, red for terrorist or gold for a special ability- into one of your cases and one where someone else is the lead. These cards are kept secret, and there is an initial card played into each threat as they enter the board as a baffle.

Now, since all the cards are secret, you don’t know if the guy sitting next to you just dropped the nine-value terrorist intel card into a threat that is about to go off. As another action, you can assign agents or troops from your supply to a threat. An agent miniature lets you look at the plot card to get a feel for what may happen if it goes pear-shaped (or if you want it to go pear-shaped). A troop figure lets you recon the entire deck of played intel cards and there’s an asset card that lets you shoot one right out of the pile. But you also have to add another at random from the deck, so your armed intervention might have negative repercussions.

Risking a negative card could be worth it, because this is one way that this game is about information. You’ve got to watch the entire table all of the time and keep track of as many threats as you can manage. If you know for a fact that a threat has all blue cards and you recon it, finding a red card after someone else has played to it- then you might have found the mole. Or, they may have only had three terrorist cards in their hand and played the lowest one they had. Paranoid yet?

Let’s say that your suspicions get the best of you and you think a threat is going south. Well, if there are two soldiers on a card- placed by any player- and you have an asset card that allows it, you can drone strike the card right off the table, nullifying the whole thing. Welcome to warfare circa 2014.

But if a card does make it to the end of its cycle, an analysis step compares the values of all of the cards to determine which way it goes. The sophistication of the group and the complexity of the plot add to the terrorist value, any agents placed on the card add to the Agency value. There may be fallout from a threat resolution- assets may be lost or a player may be “exposed”, meaning that their hand of cards is turned face up on the table for all to see. Case Leads are often directly affected by fallout or special intel cards, which imparts a great sense of accountability and responsibility for each threat. Once the numbers are run and a winner is determined, the impact value of a threat increases points on a track for either side. When one of these tracks is filled it’s the end of the game. All of this is settled on a separate display card to make things easy to sort.

Overall, the game looks great. I love the visual of the threats popping up on a big bank of monitors. The only issue I have with the entire product is that there is some clumsiness in the process. Threats are stacks of little cards, and inevitably someone butterfingers it and flops the cards out on to the table when they are trying to recon a stack or play a card into one. Having to manipulate these piles is cumbersome and not exactly ideal, a better option would have been for each threat space to have slots for each type of card. But that would result in a bigger, less clean-looking board.

Homeland is a game of social subtlety. Table talk isn’t recommended- it’s essential. Solitaire players, take a hike because this is a game about openly questioning why another player discarded a high-value agency card to get a few Reputation points and listening to their defense. It’s about looking in that stack of intel cards and outright lying to the table that everything looks OK when you know there’s a nasty terrorist card in there- and then misdirecting them to another threat. The espionage and intrigue in this game is obviously fostered by the rulebook as written, but it is brought to life by extensive, pervasive player interaction. This is a best-in-class example of this kind of game.