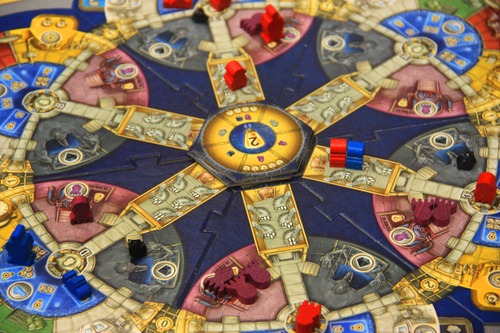 Prior to Aquasphere, I had only played one other Stefan Feld game. And it was Roma, a fun little cards-and-dice number that is probably least representative of the kinds of more complex Eurogames that have made him a favorite of those who enjoy highly mechanical, scoring-intensive designs. I try to make it a point to keep track of the big names and the big trends in hobby games and I kind of felt like it was an oversight to not have some experience with Feld even though everything I read and heard about his designs indicated that his work isn’t my usual beat. Aquasphere looked appealing with its science fiction deep-sea setting so I emailed Tasty Minstrel to request a review copy.

As if by magic, I got the game less than 24 hours after my request. And before a full day was through, I was pouring over the contents of the box and the rules. The first impressions were not good. It looked as complicated as a Chvatil design but without any readily apparent payoff in terms of narrative or leftfield innovation. It looked like an overly processional game rife with that everything-gets-you-points business that tends to result in close scores as long as everyone follows the rules, and the winner is the one who exploited just a couple of moments where there was a decision between X and X+1 points. I was left asking “What have I gotten myself into?”

The first game didn’t really endear me to it either, as a I tried to explain to two friends how this puzzle of programmed actions, area control, Octopod battle, labwork, submarines, “knowledge points”, multiple types of worker placement, time as a currency and play across three different boards. And that’s not even getting into the explanation of the “Euroglyphic” system of symbols and icons. Or the integrated limits to earning resources and points and how plan to overcome them. Oh, and there are a couple of exceptions in the mix too- I don’t think anyone remembered for the entire game that you could program a third robot to take one back into supply and earn two Time markers. The common review from this Southern table was “do what now?”

Nevertheless, I could see from that first, fumbling game that there was something there. It should be abundantly clear to anyone that examines, analyzes and plays games that Aquasphere is an intricate, multi-layered design that is actually quite beautiful in its precision balancing and interlocking subsystems. But the problem is that it is the game design equivalent of one of those guitar virtuoso records. Something by Joe Satriani or Steve Vai. The technical chops are unimpeachable, the outrageously skilled performance is undoubtedly impressive. But what it lacks is any kind of passion or heart.  And I’m the kind of person that would rather listen to The Stooges sloppy-ass first album full of fire and twitchy teenage energy than “Surfing with the Alien”.

The fall-back explanation for this game’s lack of humanity is that its setting, narrative and nomenclature are superfluous. Sure, you have Engineer figures that program robots, move around a board representing a deep-sea research facility, and deploy those bots at workstations to complete tasks including upgrading your personal lab, gathering “crystals”, researching upgrades, deploying submarines and stamping out the Octopod menace. All of that makes sense at a conceptual level. But all of the above is boiled down into a story where the only plot is “knowledge points were earned” and the process of the game really doesn’t tell any kind of a story.

Even though this game looks terrifyingly complicated and takes a little too long to set up, it’s actually quite simple at that narrative-less, processional level. You do two things on your turn- either program a bot or use a bot to execute its program. On board number one, there is a display of spaces with predetermined pathways so that there are always two choices to advance. Each has a slot for a programming chip that is randomized at the beginning of each round. To program a bot, you have to move your Engineer figure into a space and then you take a bot from your personal display (board number two ) and put it on the corresponding program slot. Because of the way the chips are randomized, it can be difficult to do everything you need to on a turn but there are a couple of “wild” options.

To execute a program, you move another Engineer figure on board number three, a big six-part wheel subdivided into stations representing each program. If you want to move to another part of the station where there are more crystals up for grabs or a less expensive slot to put a submarine, you might need to pay time markers to get there. Once there, you put your man at the console and bring the bot over from your player board. You might pick up a research card, improving your basic functions. Maybe you want to spend some time markers to put a sub out and gain some knowledge points. Or you might add a new piece on to your lab, which increases your capacities to pick up crystals, research cards, time markers or kill those rascally Octopods to earn some knowledge points. Once your bot does his thing, he gets put on the center of the sector as a control marker, and anyone that was there before slides down into a loading bay, where they have to wait until it fills to capacity before going back to your player board.

Once everyone passes, there is an end-of-round scoring. You get points for controlling the most sectors, points for any crystals you have, and for the bots you have on the board. But here’s the catch. There are redline limters on the knowledge track, and you have to pay a crystal to advance your score marker past them. Hope you found time to grab a couple during the turn. The bot point total is also limited by the number of subs you have in play- the more subs deployed, the more bots you can score. And then, if you’re not mathed out at this point, there are also NEGATIVE points assessed for any Octopods that are causing trouble in any sector where you have bots. I’m telling you, wipe those things out. All of them.

This goes on for five rounds and then there’s another intermediate scoring, followed by a completely different endgame scoring where the limiters  are ignored but you get points for having a completed lab, for having lab components with sets of letters A-F on them and for having all of your subs deployed. So yes, “point salad’ is definitely on the menu and as long as players keep playing the game- they’ll earn points.

There are just too many points at which the setting breaks down. Why do I need those A-F lab segments? What does that programming board even mean, why are there limitations on when and what I can program? Why can’t I score points for the four bots I have out unless I get two more subs on the board, what is that supposed to represent? Why does spending a crystal (or removing a bot from a program) make me able to get more knowledge? What the hell am I researching anyway? I get that the Octopods clamber into the station and mess stuff up, and I like that angle which is why I keep bringing it up. I wish there were more connections to storyline like that.

So in the end, it isn’t that Aquasphere is necessarily abstract. Its mechanics are, in fact, more specific than rolling a pipped cube to determine who wins a massive battle between combatants of whatever description. It’s that the scoring-focused mechanics are completely in the service of the trains running on time, so to speak. Does that mean that Aquasphere, with its “bundle of sticks” approach to multilayered mechanics and score generation, is a fascist design? It’s certainly not a democratic one, it’s far too machined.  I find that I appreciate Aquasphere more like how I would appreciate a piece of industrial design than as a board game.

The funny thing is that I actually like this game and think there is fun it once you let it do what it does best. After a few sessions I’ve also come to enjoy its depth- there is a lot of game in two fundamental actions here. And it is undoubtedly rewarding to work out the subtle opportunities and edge ahead. The strategies are compelling, even when the narrative isn’t. But that is kind of the Feld design sensibility, and you don’t buy one of those guitar solo records to hear a three minute punk song with a killer hook. I can see  more clearly now why people like this designer’s games in general, even though I think I’m content to stick to Aquasphere as my Feld fling for now.