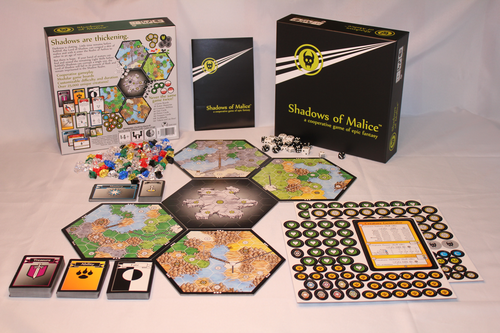 It is almost more illustrative to approach Jim Felli’s Shadows of Malice by explaining what it doesn’t do and doesn’t have than it is to describe its features. This is a fantasy game that doesn’t attempt to simulate a Fantasy Flight or Games Workshop design. Nor does it attempt to weld whatever the mechanic du jour is onto a sword and sorcery framework. It doesn’t attempt to be an RPG for board gamers. There is a story, but it is limited to a couple of paragraphs in the rulebook and an overarching narrative line that informs the entire game system. There is no flavor text on the cards and very little artwork all around. There are no pictures of your characters and in fact no pictures of monsters, either. The cities you visit in the game don’t even have names. There are no rote character classes. There are no elves, dragons, orcs or dwarves anywhere to be seen.

But what is here, packaged in a starkly black box adorned with a lime green monster icon cut through by three lines of white light, is a very back-to-basics quest narrative that isn’t necessarily inventive or unique in gaming. But it is also one that sidesteps many of the clichés of execution that plague fantasy games simply by remaining willfully vague and nondescriptive, allowing the players to embellish the gameplay with their imaginations. This game doesn’t tell you a whole lot other than providing an almost abstract setting and a very high level idea of what is happening in it. The world-building is very much up to the players, just like it was in old school roleplaying games.

Players represent barely defined Avatars of light, each with an assigned Mastery skill, tasked with locating Wells of Light hidden throughout a realm called Aethos. These Wells are hidden in strongholds scattered across the modular hex maps and protected by powerful guardians. At the outset, the Avatars are nowhere near strong enough to fight the guardians. The players must travel across the sometimes difficult landscape to visit Mystics and Cities, looking to acquire powerful potions and other services while also venturing into creature lairs to find treasures and Soulshards to aid their cause. Fate often intervenes for good or for ill, often imparting your Avatar with blessings or curses.

But lurking in a nether-realm are the shadows of the demon Xulthul. They gather strength, searching in the darkness for portals into Aethos. When they break through, they begin moving toward the strongholds, attempting to turn the Wells of Light dark- thus strengthening the forces of evil. Not all strongholds house Wells of Light- some have been corrupted, and when these are found by the shadows, the forces of darkness becomes stronger. But should a shadow find just one uncorrupted Well of Light, the demon is manifest in the world and it comes down to a battle between the Avatars and Xulthul made flesh.

You might be misled into thinking that Shadows of Malice, based on the above description coupled with some fairly standard mechanical concepts, is similar to other games you already own. Maybe Mage Knight, Magic Realm or Arkham Horror. But I assure that it most definitely isn’t because this game is one of those leftfield, “outsider” works that is approaching its subject from a few different angles. And I love different angles.

One of the key differentiators, and in fact one of the elements that gave me one of those “huh…” moments in my first game is the concept of banding. When Avatars meet up on the map, there is an option to party up to move and act together. In this design, players simply must unite to win and in a much more meaningful way than “you whack that mole over there, I’ll whack that mole over here”. There is a strong notion of shared strength and shared resources throughout the game. When players join together to form a band, everyone benefits. There is more flexibility in combat. Damage is shared. Advantages benefit the group. Anyone in the band can spend Soulshards to increase die rolls. Together we are stronger.

Another “huh…” moment was during the first encounter my table had with a creature, resting in its lair. You roll three dice, effectively consulting what amounts to a random monster generation table. Depending on what kind of terrain the lair is in, you might find yourself squaring off with one of many different types of creatures native to the area. The second roll determines the monster’s relative strength- its life points, combat bonuses and so forth. The third roll determines how many abilities it has. So you might find yourself against a savage, vampiric Protean (that would be like a slime, mold, gelatinous cube or something similar) with extra appendages. Or a wraithform Avian that sprays acid at you. The end result is that the monsters you form wind up being much closer to weird, 1st edition D&D critters like Owlbears, Displacer Beasts and Carrion Crawlers than Tolkien descendants.

Battling these random monsters can be quite thrilling. Maybe someone in the band throws a poison grenade in the pre-combat phase, hoping to shave off some life points before the first blow is struck. Maybe someone else guzzles a potion to give them extra defense and someone else drinks one to add to their combat roll. And then someone else uses a Soulshard to activate their secondary Mastery ability, which confers their personal advantage to the rest of the party. Once engaged, a single player attacks each round looking for a high roll against the monster’s die. If it’s higher, the monster takes a wound. If it’s lower, someone on the party takes a hit. So on round two, one of the potion drinkers decides to quaff another (incurring damage!) and then has to defend for the round and someone else- maybe the guy with the Axe of Firey Rage- steps up to take a shot.

This is a dynamic, compelling combat system that does not feel anywhere near the Talisman “flip a card, roll a die” model or anything like more simplistic tactical systems. It does take a little longer than some gamers might be comfortable with. And there are some aspects that are a little clunky, like having essentially three different types of damage (life token loss, wounds and drains). But every battle presents an interesting mix of combatants, abilities, equipment and surprises.

So how about “levelling up”? Well, you kind of don’t. Instead, when a Guardian is defeated at a Stronghold and a Well of Light is found, every Avatar gets to draw from a set pool of ten radiance counters. Yes, for those of you paying attention that would be a pool of radiance. Each of these confers a bonus to movement, combat roll, luck roll, recovery and so forth. When the next Well of Light is found, a new set of ten is added to the pool and everyone gets another. You may never be level two, but you will definitely feel your Avatar becoming stronger over the course of the game.

And should the Shadows succeed in breaking out of their nether-dimension and into Aethos, you will also feel them getting stronger as well. As corrupted wells are revealed, the monsters get stronger by having bonuses added to their generation rolls and extra abilities. There is a strong sense of light struggling against a rising tide of darkness throughout the game- all without any kind of doom tracker or threat dial to tell you that the bad guys are winning.

For as streamlined as this game is, doing away with more or less any bookkeeping or administration of any kind for example, it is a fairly complex design and it is also a game that can run quite long- perhaps too long for its own good. Especially because what players actually do in the game is quite limited- move, visit a Mystic or a City, fight a monster, explore a stronghold and that’s about it. That said, there are situations where the Avatars may have to react to a Shadow threatening to hit one of the Wells and these instances can create some interesting strategic decision points.

There are also certain aspects of the game that I don’t think quite work, like this somewhat strange “Xd*” die roll that is used to determine 50-50 success odds on things like treasures actually working or to figure out how much of a bonus something actually provides. It makes sense- basically if you’re rolling 1d* high then a 4, 5 or 6 is a success- but I think it’s telling that there are also some tokens provided in the game if you just want to basically flip coins. There is a lot of dice-rolling all over the game, including a roll-and-move mechanic, so if that isn’t your thing you may want to steer clear of it.

The rules are confusing in places, and it’s almost alarming how Mr. Felli just sort of trusts the player to make judgment calls and to come up with their own ways to track things like monster generation rolls without special cards or custom dice. It can be a difficult game to teach because a lot of it is counterintuitive and you can’t really tell the table that something is like it is in another game. It’s wild country.

And that is one of the reasons why I am giving this game the highest award I have authority to give, the No High Scores High Score award. This is a wild, dangerous and risky design that takes chances and isn’t afraid to fumble. It’s a heartfelt, passionate game designed, produced, financed and brought to market completely by one man- this is not a crowdfunded title- who had faith enough in what he has made to invest in making it a saleable product. I love the courage of this design, I love that there is almost nothing in it that reminds me of something else at least beyond a surface impression.

And it is fun to play, it is narratively compelling and there is most definitely a great design here that could do much to innovative the stale fantasy genre in games. I would not recommend that anyone go for the eight player game and I would also advise those who are adverse to more experimental, less-than-airtight designs to steer clear. Shadows of Malice is not a game for everyone, but for those that value the creative qualities that I do, it should absolutely be at the top of your to-play list.

3 thoughts to “Cracked LCD- Shadows of Malice in Review”