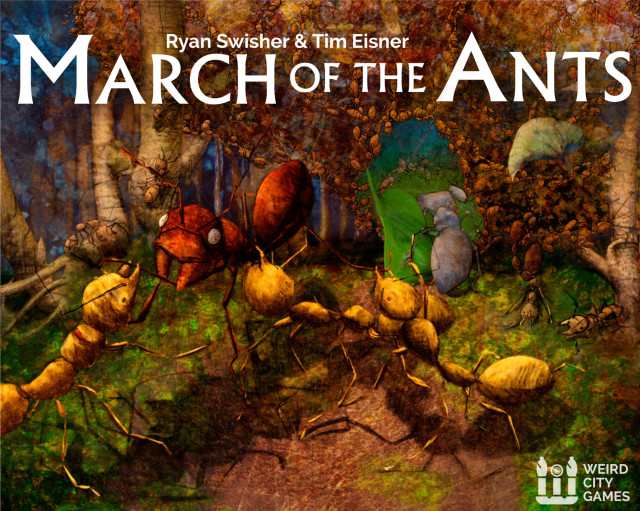 The primary reason I wanted to check out Weird City Games’ March of the Ants, a 4x design written by Ryan Swisher and Tim Eisner, is because I am totally obsessed with the film Phase IV. Without getting into too much extraneous detail and turning this into a film review, this 1971 science fiction picture directed by Saul Bass is about ants suddenly becoming highly evolved, intelligent and capable of making us their servants. It’s all very subtle, understated and weird in that way that 70s science fiction can be. But March of the Ants, even though it’s a solidly designed game, is by contrast not quite weird enough despite the name of the publisher.

The concept is pretty awesome- effectively, the design isn’t too far off from a simplified, streamlined Twilight Imperium or Eclipse but you’re exploring the growth and undergrowth of a meadow instead of space, looking for resource gathering sites instead of planets, and doing so with ants instead of spaceships. Of course there’s battle, as these sites that generate food, cards and additional larvae aren’t exactly one per player on each of the explored hexes and resources in this game are extremely tight. Everything costs food or you might have to “pay” ants or larvae off the board. And then there is a feeding step at the close of each turn where you have to have enough to feed all of your ants. I especially appreciate how the designers have made this game firmly focused on a struggle for survival on top of the usual 4x fare.

There is also an evolution game going on here. Your colony can mutate over the course of the game, changing heads, thoraxes and abdomens to gain advantages and bonuses. In addition to whatever on-card abilities are conferred, heads add to combat strength, thoraxes augment movement and abdomens increase your ability to feed your ants. These upgrades are costly but there are also victory points to be earned for full three-piece sets of evolutionary traits.

The process is divided into a worker phase, whereby players move, explore, draw cards (evolution traits, events or VP-earning colony goals) and conduct general ant business. Most actions require food and food is scarce, so the turns are almost too restrictive for all but players that monopolize the food gathering sites. Once two players “rest”, which is basically a pass with a possible bonus, the game shifts into the soldier phase. Any hex where there are more ants than resource sits is considered contested. Combatants add up their ant total, any head bonuses and play a face down card for a knock-on battle value. Once all of the contested hexes are resolved and there are no ants loitering where others are toiling, the Queen phase wraps the round up with resource collection and some bookkeeping.

As for finer detail, there are some hexes that put centipedes on the board as a kind of neutral/native resistances and there are some that have wormholes that act just like- you guessed it- wormholes. But with actual worms in them. Event cards are costly but can be highly effective while also adding a touch of narrative. There are optional hex tiles that have special effects and players can choose to play different ant colonies with unique advantages and disadvantages. There are solo and co-op options where the players are battling against the centipede menace- a nice touch in a game belonging to a genre that does not often feature these game types.

Here’s the thing about March of the Ants that bugs me. Every single aspect of it apart from the “world of the ants” setting is derivative. During the worker phase, when you select an action then every other player gets to make a specific reactive play. This is obviously from Puerto Rico or more directly Twilight Imperium. But more telling than a justifiably borrowed mechanic is that it would be easy to simply replace all of the really cool ant illustrations and nomenclature with space ships and science fiction terminology and there would not be much of a loss- change the resource sites to planets, the breeding chamber to a shipyard or space station, the Great Tunnel at the center of the network to some kind of central star system and the evolution cards to technologies for combat, propulsion and economics. The evolution mechanic itself strongly resembles the great Evo, from Philip Keyaerts. As a whole, the game just doesn’t feel very inspired by its own concept.

There is some good work here, and it does feel like the creators put some thought in how they wanted to describe this particular setting even if the design is an assemblage of common mechanics and systemic approaches. I appreciate that there is some light science involved with proper scientific names and I absolutely adore the illustrations- especially the “Grand Evolution” card that has got to be a reference to Phase IV. I think the solo/co-op game is especially thoughtful and well-executed, even if it does just provide some automated resistance through some card flips and simple triaging.

It just feels like March of the Ants could have gone further to describe its subject, that it could have been more artful than workmanlike. There’s not a strong enough voice here- it isn’t saying enough about this empire of ants, their peculiar habits, the ways that they live and die. It’s not that it is abstract or that the theme is “pasted on”, as some might expect. It’s that it doesn’t look to the nature of ants and insects, the world of the soil and the earth, to derive its mechanics or its processes- it looks to other games.