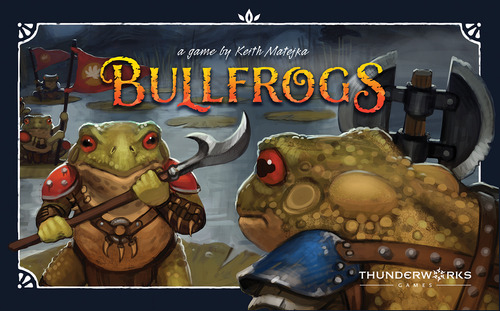 Back in the late 1990s and early 2000s, German publishing house Kosmos had a pretty good run with a line of inexpensive, small-box “Games for Two”. Lost Cities is probably the best known of this lot and it is emblematic of these games- easy to learn, easy to play and with a good mixture of skill and luck that accommodates replayabilty. Kevin Matejka’s Bullfrogs is a decade and a half too late to be one of these games, its box is the wrong size and it is a one to four player design but it very much reminds me of this type of small-scale Eurogame. If it were 1999 or 2000, I wouldn’t be surprised to see the game next to Kahuna or Hellas. But unlike some of those games that are still popular or at least fondly remembered today, Bullfrogs might not be as evergreen.

It’s one of those “is that it” kinds of designs where a read through the rules makes you wonder if there’s really much of a game there, but it turns out to be more than it seems. Each player represents a tribe of warrior frogs waging war with other amphibian aspirants to stake out and claim lily pads. It’s a cool setup, but don’t expect much in the way of setting other than a really great piece of fantasy frog illustration on the box. On a turn, you play a lily pad card out of hand, drawn from a private deck. This card is played into a grid-based arrangement of other lily pad cards to form the area of contest. These cards feature a number of spaces on it where frogs can be stationed as well as a VP value. They also drive the game, as the card you play also indicates how many actions you get. There’s only two to choose from. You can deploy frogs of your color in any lily pad with available spaces in any card in the row or column where you’ve played with a maximum of two per card. Or you can “sabotage” another player’s frogs in any row or column containing your card. This means you jump their frogs to an adjacent lily pad with room for them or onto a central log card.

Once a lily pad is full of frogs, the player with the most on it (including very limited but double-counting Bullfrog units) scores it and it sinks. Following a simple triage, the winning player gets to jump the losing frogs off the card first- only one per adjacent card- and then their own. Everything else sinks and goes back into supply, and then the cards may shift to fill in any gaps. But here’s the croaker- that movement can cause another lily pad to fill up and sink, creating another scoring and another jump-off. And of course, that may result in yet another lily pad resolving.

So there are two interesting elements at work here. One is this whole chain reaction mechanic, which creates the possibility for sweeping plays and surprise upsets as suddenly the board state is upended and frogs are jumping all over the place- a cool visual that at least goes a little way in telling a story here. The other is that there is a welcome take-that tone aided and abetted by the fact that most of the time when frogs are moving- someone else is kindly moving them for you. And of course they’re going to be doing what they can to keep you from having the majority on the next lily pad likely to score. I trust you will share them the same discourtesy.

Endgame scoring is combination of the lily pad cards you’ve scored as well as a count of however many frogs you have on that central log- and there’s also a bonus for having the most there. Additionally, you get extra points for claiming lily pad cards of your own color so there is a strategic element in plotting to lock those up before others can get in position. This can lead to those kinds of X or X+1 decision points- or you might just be willing to take what you can get given the tactical situation left to you by your fellow players.

It scales well, but I find that I prefer the two player game over the multiplayer game- it gets back to that feeling of those great “Games for Two” style games. You can teach a partner how to play in about three minutes and then spend the next 45 minutes or so playing a best of three. The three and four player games are worthwhile, but definitely more unpredictable and volatile.

There is a solo option that is sold separately, but it really should have been included in the box since it is just a rules sheet and a pair of custom dice. Playing alone is mostly the same process, but your automated opponent doesn’t play cards. Instead, you take one of the other color’s pieces and use a Bullfrog to indicate where they are on the map. After you play your lily pad and take your actions, you roll the two dice to move that Bullfrog and then he places frogs there according to standard rules. His score at the end is subtracted from yours to arrive at a ranking. It’s actually pretty challenging, but it makes the core gameplay feel more like a series of tactical puzzles- which may or may not be a good thing depending on what the player wants from this kind of experience.

Bullfrogs is very much one of those kinds of games that succeeds or fails on playing it repeatedly to understand the nuances of deployment and sabotage, and setting up the chain reaction lily pad scorings. This is the kind of game that could become a go-to title for partnerships or even as a multiplayer filler. But it also lacks impact, a kind of addictive X-factor hook, and I’m worried that it’s not going to make much of a lasting impression on most players because of that. It may be that there isn’t enough of a differentiator other than the frogs. The setting is really fun, I love the warrior frogs thing, but ultimately this is an abstract placement and area control game- and there are lots of those on the market for those who may not be into axe-wielding amphibians. That said, there aren’t many that are as inexpensive and simple with a good mixture of take that, tactical play and a compelling chain reaction mechanic.