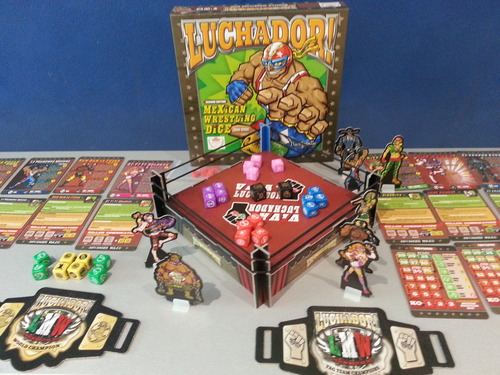 When you open a box of Luchador: The Mexican Wrestling Dice Game, if you don’t crack a smile when you see that the game comes with a 3D, cardboard wrestling ring with elastic ropes – not to mention lots of custom dice and colorfully illustrated, oversized character stand ups and faux championship belts- then obviously you and I are delighted by very different things. If you also don’t understand right from the get-go that this is a fun-first design geared toward generating as many cheers and jeers as possible rather than one for the pensive brow-furrowing, beard-scratching set, then Luchador might not be one for your collection. But if you are in the market for a rowdy, raucous event game that manages to almost completely encapsulate everything that makes dice games great, then Mark Rivera’s brilliant design is going to put you down for the one-two-three count.

But I wasn’t always a believer in Luchador. The first couple of games I played with my set were with a group of friends that aren’t really very rowdy or raucous, and I don’t think any of them even know who Rowdy Roddy Piper is other than the sunglasses advocate in “They Live”. There was a generalized disinterest in the wrestling subject matter, so it sort of fell flat. But when I tried it again with friends that understood the kayfabe glory of Wrestlemania III, the old NES Pro Wrestling game and Santo movies it came to life. Rolling dice onto that ersatz squared circle was peppered with increasingly vulgar trash talk, each roll filled with tension and the threat of fake violence. And since dice that fall out of the ring or that get knocked out by other dice don’t count, it almost became a contact sport. What’s more, players that chose to go the safe route and accept lower-damage standard attack rolls instead of spending two of those to roll the Luchador die to shoot for a special move were shamed for their cowardice.

This is a game that definitely lives or dies based on how invested players become in beating their friends and winning one of those stupid little belts. That said, I don’t think that being a wrestling fan is a pre-requisite to enjoying the game. I haven’t really been into all of that stuff since the eighties myself. But if you can get with the vibrant Lucha Libre setting and put aside prejudices about “sports entertainment”, there is a fun game here that anyone can enjoy.

You can play Luchador in a couple of different configurations. The one-on-one game is great, but even better if you set up a simple knock-out tournament with more players. You can also run two-on-two or three-on-three tag matches or do a battle royale. Cage match rules are included, and there is plenty of room for customization, house rules and so forth. There are basic rules and advanced rules that add character-specific advantages, disadvantages and killer combinations.

On a turn, wrestlers throw four wrestling dice each into the ring. There are hit and miss results as well as blocks that nullify opposing hits. There’s a counter result that turns a wrestler’s hit into a hit for his or her opponent. The pin face allows a player to go for a pin if the other’s strength has gone below a pinning threshold. You can re-roll pins if you’ve not beaten down your opponent enough and you can also hold blocks for later to play defensively.

The advanced game adds a little more decision-making at this stage of the process. Each wrestler has a killer combination of three dice results that set up a “finishing move” kind of attack only usable once you’ve gotten the opponent down past the pin threshold. Obviously, if your dice-rolling strategy is such that you roll it up in one, you’re a true champion. But most mortals will want to lock in results to try to hit the combo on a subsequent roll but at the cost of rolling fewer dice next time. The sense of watching for an opportunity to do your big, signature move is tangible. The strengths and weaknesses of each wrestler also come into play at the advanced level, which modify results and provide for a more asymmetrical game.

Once the rolls are compared, players then get to roll green damage dice to see what blows were actually struck. Table smashes, drop kicks, chokeholds and so forth sap a wrestler’s strength. But if you have two or more hit results, you can forfeit rolling two of the green dice for guaranteed hits to roll a big, black Luchador die. This die activates one of your wrestler’s special moves, which do more damage than the standard attacks. But you can also roll a fail or worse- an injury, which knocks out one of your dice for the next round.

After blows are exchanged, anyone with a pin result rolls yellow pin dice to see what happens from there. There’s a stun result, which reduces the wrestling dice for that player next turn and there is a Viva Luchador one where your wrestler grandstands instead of ending the match- you get a strength point back as you bask. But if you roll a pin at this stage, the other player gets to roll their wrestling dice three times looking for three block and/or counters. And if they roll three of a kind in one roll, they reverse the pin and you’re on the mat regardless of your current strength. It doesn’t happen often, but when it does, it’s invariably awesome. The rules suggest that players collectively count each pin-breaking roll so you get that “one…two…three” countdown going on, and I strongly recommend that this become an iron clad rule. It’s fun and it amps up the stress since a player is defeated if they miss.

READ ALSO:  Tyranny of Dragons and Princes of the Apocalypse Review

What impresses me at a design level about this game is how completely Mark Rivera has captured all of the elements that make a dice game good. Simple rules keep it brisk, short and within an agreeable scope. There is the drama of the initial roll. The light strategy of choosing to hold results. An element of risk-taking if you want to go for a special move. And of course, the sense of surprise and excitement that only random results can generate. But like King of Tokyo, its closest peer, there is definitely a game here with some well-executed mechanics. Fans of that game might find that Luchador offers just a touch more depth with a similar degree of accessibility and ease of play.

The only negative I can muster against this championship package is that like “off brand” superhero games, it feels disappointing that there aren’t licensed wrestlers in this game. I’m sure Backspindle Games isn’t anywhere near capable of snagging a WWE license, but what I would really like to see is for this game to follow through on this Luchador theme and feature authentic Mexican wrestling stars from something like the AAA Lucha Libre promotion. Or even some of the smaller, independent promotions around the US. The cartoon wrestlers are fine and they look great but real-world superstars would be the DDT-through-the-table finisher to make it one for the ages.

One thought to “Cracked LCD- Luchador: The Mexican Wrestling Dice Game in Review”