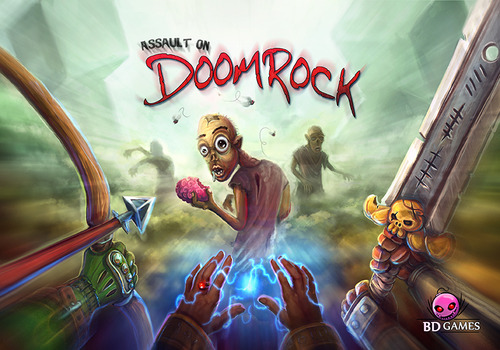 So this is one of those that may not grab you immediately and it definitely requires that you dig in and get acclimated to the way it does things. There are faint whiffs of Talisman and similar adventure games in its lineage, but this is most definitely not another flip-a-card team whack-a-mole nor is it another rote dungeoncrawler. Mr. Stasiak’s work here is highly idiosyncratic, maverick and it is totally the kind of what-the-hell-is-this design that keeps me interested and afloat above the turgid sea of mediocre titles out there today. But you’ve got to have some patience with it, as is usually the case with games that are trying to do something different.

Storyline is about what you’d expect. Team of adventurers sets out to battle forces of evil, has encounters, gets loot, fights monsters, et cetera and ad infinitum. Each player takes a character class card and a Trait card, which is both an advantage and a disadvantage. You might wind up a Sadistic Ranger, a Frustrated Mage, or a Stinky Warrior. These two cards also define the four ability cards you begin the game with, all of which create a distinct sense of character- especially when you level up in the game and add new abilities. There are no stats. Each card may have an attribute and a couple of symbols that in sum dictate your strength, intelligence or agility for purposes of meeting equipment requirements.

Three location cards are laid out at the beginning- mountain, wilderness and town areas. Each of these cards has a number of areas that the players- always acting as a group during this stage of the round- can visit. Some might require the players to spend Heroism tokens, for example if your gang decides to rob the shop. Others might require you to draw a Peril card to make a roll on a loot table. Or maybe you want to just explore the secret areas, drawing an encounter card and dealing with whatever happens, foul or fair. Money is tight as all get-out, especially since it is used not only to buy common and epic items to equip the heroes, but also to level up and buy new ability cards from a generous stack.

READ ALSO:  Cracked LCD- Dragon Con 2013 Post-Mortem (or, The Misanthrope among the Tribes)

Here’s the gimmick, and it’s a good one. There’s a setting card placed at the beginning of the game that has a global effect. It has a number of Time tokens placed on it Moving from location card to location card costs a time, as do many of the local actions. Venturing forth to new location cards from the deck costs them too. And when they run out- it’s time to fight and the whole game practically becomes an entirely different one.

There are three of these rounds in the game, with two major battles and then the fight against the main boss is the third. All of that adventuring you do under that tense time limit, all of that looting and buying and levelling, is to get you ready for these imminent fights. Hope you managed to stock up on Heroism and Shield tokens and had the time and money to get everyone a new ability, because you are going to need all the help you can get. You will be outnumbered and more than likely outgunned.

The battle segment of the game makes some brilliant abstractions in terms of how it depicts the tactical battle between the heroes and the Zombie Horde, Exploding Tomatoes or Tentacle Monster. There is no grid, there is no map. Either you are adjacent to another character or minion or you are distant. That’s all you need to sort out whether you are using melee or ranged or if you need to maneuver into positon for either kind of attack or effect. I love this- minimal and effective.

When the battle starts, the encounter card is revealed and minion tokens are set up on the table. The heroes decide how they want to gather or if they want to stand alone. The stakes are high and you can lose the game in the first of the three battles easily, especially if you haven’t gotten the hang of how this all works. If it’s your first game, you probably will.

Player abilities are primed by rolling 4D6 and assigning matching die rolls to ability cards and over the course of the battle you’ll spend these to activate attacks, evasions, spells and maybe slapping another hero to get a hit point back- I guess it makes that Frustrated Mage feel better. Some of these abilities are “Initiative Enabled”, which means that they can be used before the Minions activate. So the Ranger can pull off a couple of pre-emptive shots with his bow, provided he rolled the right results through an initial attempt and two optional re-rolls. Ones can be used to buy Shield tokens to cancel damage, sixes can buy Heroism tokens that buff some abilities.

After the heroes resolve initiative effects, each then activates two minions by drawing cards from an AI deck. These cards might move the minion to the player with the highest Threat value, the current player, or someone else. They may bite or claw you, inflicting damage that can be canceled with any Shield tokens you have. The Beasts of Doom might roar. The Tomatoes might explode. The Zombies might grab your leg and steal dice from you or vomit on you, causing Exposure.

Exposure is a somewhat unusual concept. Each point of exposure earned either during the adventure stage or in battle adds a token to the hero or minion. And when an attack is resolved, all of the exposure tokens that character has accrued are revealed and resolved. Typically, these increase damage but some push the exposed character away. Some are also blank. This is the only element of chance in terms of resolving combat effects and damage. There are some other effects keyed to exposure, for example the main Dragon boss loses his armor rating if you can put three exposure tokens on him.

Hopefully, by the time the heroes get to their actual activation stage they have some dice left on their cards to move, attack or cast a spell. Together, the heroes get to work out how to best use their abilities to fight which might see any combination of those basic actions occurring in concert with any benefits imparted by artifacts, weapons, armor and abilities. There is definitely some element of games like Descent, where players are trying to coordinate and maximize, but the lack of a granular spatial element makes this a very different kind of fight.

The battles are really the centerpiece of Doomrock and take up most of the time spent playing it. They can be intense, stressful, funny, obnoxious, brutal and unpredictable. But they can also feel too long-winded, frustrating, exhausting and repetitive. But in general, they are rewarding, and bringing your battered heroes back into town to recuperate and count the spoils has a tangible sense of satisfaction. And then a new setting is drawn, and the countdown to the next encounter begins.

What I love the most about this game, aside from its ambitious pairing of two completely different kinds of gameplay, is how clearly and succinctly it creates a strong narrative line. Developing your character from the initial advantage/disadvantage/class template into something more than just +1 stats is great. The team-made decisions during the adventure phase craft a distinct story, usually comically embellished by players. Each encounter is different- if you fight the Beasts of Doom and the Shadow Reapers and then the Dragon in one game, each is a very different encounter with completely unique enemy behaviors and reactions. The tone overall is light, quality humor abounds in everything from the fluff text to the names of the items. The Heroism tokens are heavy metal finger-horns.

But what I don’t like is the overall length of the game, which can run 45-60 minutes longer than I would like for a full table of four. It can degenerate into rambling if-then discussions both in the adventure phase and battle phase, which can cause that kind of group analysis paralysis that isn’t exactly what I’d call fun. And those adverse to the “Alpha player” problem beware, especially because players move and act as a group before the fight begins. To flip that around, Doomrock is quite possibly better as a solo game if you are accustomed to keeping track of multiple characters. You lose the shared narrative, but you gain total control and nobody will be grumbling as the game enters the third hour.

As for the level of challenge, it could be problematic. I think it may be more capricious than genuinely difficult once you figure out how to level and gear up effectively, which is largely dependent on which locations are available and then how to make the most of the characters’ abilities during the encounter. All the tactical planning and positioning in the world doesn’t make a difference if you can’t roll that six you need after three rolls of four dice, which could hamstring one or more of the group. Yet I wouldn’t consider this to be a luck-heavy or luck-prone design- I think that sometimes the game just hates you. Publisher BD Games should borrow the marketing tag line used for Dark Souls- “prepare to die”.

The time element is really quite punishing, possibly too much so, and the resources are tighter than they are in an early Martin Wallace design. It feels impossible to ever have enough money to buy stuff and also to level up everyone, and there’s just not time to earn enough to cover expenses. So that makes the game, in some ways, feel artificially difficult. That said, it doesn’t feel fake-hard like Ghost Stories (for example) does, where whether or not winning is possible only if the cards are sequenced right in the deck AND you roll like a god through the whole thing.

Overall this is a fascinating, compelling design that feels refreshingly bold and possibly innovative. I’m always willing to forgive a few grievances in favor of experimentation, unique concepts and novel mechanics. Assault on Doomrock isn’t really like anything else out there right now even though it may look redundant on the surface. A second edition and an expansion are in the works, and it really needs both to smooth out some rough edges and to increase the variety of encounters.

One thought to “Cracked LCD- Assault on Doomrock in Review”