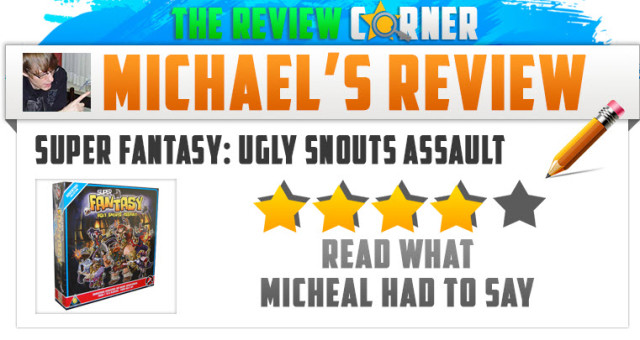 This week’s review is over at Miniature Market’s Review Corner, and it’s a good one.

“Five years ago, there were barely any dungeon crawl games on the market. Kevin Wilson’s Doom board game from 2004 eventually led to Descent, which sort of put the genre back on the map. Just a half decade and a couple of Space Hulk reprints later, there are tons of these kinds of games out there largely thanks to Kickstarter campaigns for mediocre attempts at recapturing the feeling of playing Heroquest or Warhammer Quest in the 1990s. But there have been a couple of great hall-crawling, hack-and-slash titles to come out of this boom, and Marco Valtriani’s Super Fantasy: Ugly Snouts Assault is most definitely one of them.”