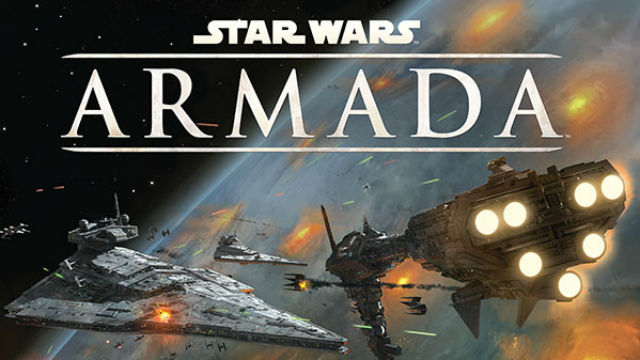 It takes about a New York minute between seeing a copy of the X-Wing base game and wondering what a Star Destroyer model might look like at that scale. In that minuscule time frame, Star Wars: Armada became an inevitability.

In truth, the Star Destroyer in any scale is almost bound to ruin the look of the game. Even here it looks enormous, and dwarfs the spindly Rebel ships that oppose it. The quality of the paint jobs seems to have gone down a notch, too. Armada just doesn’t have the same visual appeal as its illustrious predecessor.

So it’s a good job that it’s a much better game.

Miniatures games are, on the whole, luck-fests. The skill comes in picking your lists beforehand, like a chef carefully eying up flavour combinations for that nights’ dinner menu. At the moment, the lack of expansions means there’s a lot fewer options for Armada and that feels like a breath of fresh air. Instead of getting bogged down in the minutiae of choice, you can slap a list together and play. And when you do, you’ll find that here, it’s the game itself that demands planning and strategy.

Although the models and the license beg comparison to X-Wing, this is a totally different game. Instead of secret movement selections you pick secret orders to fire, repair, maneuver or command fighters. The bigger the ship, the further in advance you have to select these orders. As they come up, you can chose to take a token to use on a later round for a weak effect, or use it then and there for a powerful one. So for a behemoth like a Star Destroyer, where you’re picking orders three rounds ahead, a lot of advance planning is necessary.

What really makes the game, however, is the turn structure. In this game, you fire before you move. A simple change, and one that’s hardly novel, but it means you have to make sure your ships are where you want them the turn before. More planning, more strategy. The more novel idea is separating the fire/move phases for the big ships and the fighters. Normally, the latter move after the former, making it doubly hard to get them into position. But if you use a Squadron command, you can move some of the little ships with the big ones. And at those moments, they can prove decisive.

The whole thing feels like a ponderous yet wonderful ballet. Colossal frigates and dreadnoughts wallow in the vacuum, trying to line up broadsides against one another. Fighters dart around them, hoping for the orders and information that will allow them to make a difference. Yet even as the fistfuls of multicoloured dice rattle over the table, they’re just arbiters to tip the see-saw and excitement to ice the cake. Most of the time, victory goes to the player with better list, the better plan and the best ability to predict moves ahead of time.

Nailing the balance of skill in list-building and skill in play is the chief triumph of Armada. It’s a tricky thing to get right, and many games have fallen by the wayside on the way. Whether Armada can maintain this delicate act in the face of an inevitably-expanding expansion roster remains to be seen. For now, it’s a thing to be savoured.

If you can afford it. 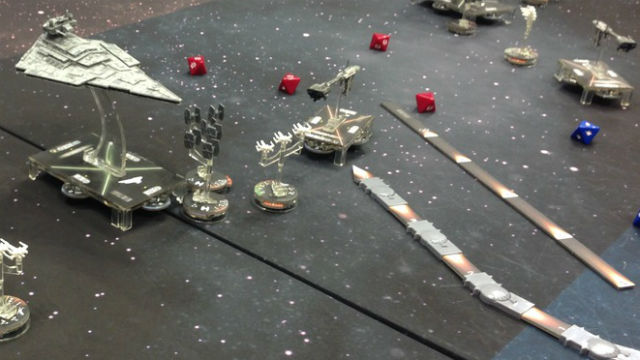 Because price and accessibility is one area where this does deserve comparison to X-Wing. For that, a modestly priced starter box gives you everything you need for a fun few games. Armada’s initial outing is about three times the price. And to get the most out of it you need not one copy, but two.

While the game excels at providing a challenging yet thrilling experience, it can feel gamey in a way that X-Wing never does. Instead of fighting until the bitter end, it’s played for a fixed six-turn duration. That makes it surprisingly quick, but can lead to bizarre situations toward the end like the leading player suddenly trying to break combat and run.

The clever twist of making fighters move after capital ships may add a lot of depth, but a moment’s consideration shows it’s also silly. It makes nimble fighters less able to react to the situation than ponderous cruisers. So you end up with the peculiar spectacle of fighters dancing around a bigger ship they can never hope to get into their target arc.

These problems are fundamental to the game, but the more models you put on the table the less of an issue they become. As the number of combatants increases, it becomes harder to run away, harder to leave your enemy without something to shoot at. Full scenarios also have objective cards which offer more complex and interesting victory conditions.

You get none of this with the starter scenario you can play with the paltry three models in the box. So right now, you need access to two copies for a satisfying game. Even then, the limited selection of ship models feels contraining after a few games. Things will improve a bit when the wave one expansions come out, but it’s still an expensive proposition.

Which is a shame, considering how great the beating heart that drives this title has the potential to be. Space combat is often imagined to be a bit like naval combat, but this is the first game that really made me feel like an Admiral. It’s just that you’ll need an Admirals salary to get the most out of the experience.