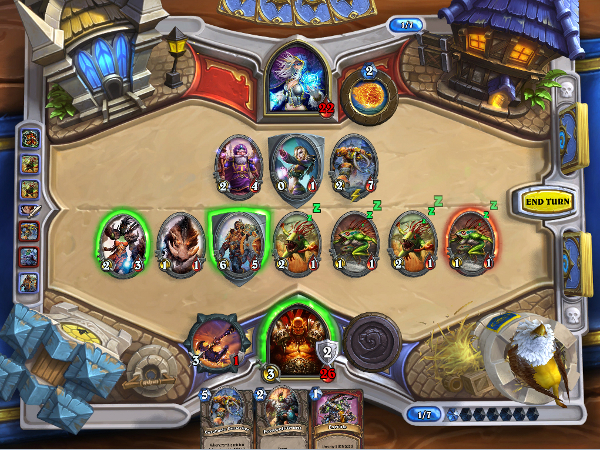 OK, so for most folks this is a way, way late review since Hearthstone has been out now for over a year, not including time in Beta. It’s also a review that might stir up an obnoxious debate as to whether the digital CCG should be regarded as a video game instead of a tabletop game. And almost certainly, lamentations about it being free-to-play and supported by IAPs – let alone that it is a collectible card game that requires that you actually pay for it if you want to be competitive- will certainly follow. And this is also the second time I’ve reviewed Hearthstone. Last time was just over a year ago here on No High Scores.

But here’s the deal. Hearthstone recently released its long-awaited iPhone-friendly update and I’ve been playing it almost non-stop since. I had played the IOS edition briefly when it first came out as an iPad-only release, but because that device is almost always covered in the sticky remnants of peanut butter and jelly sandwiches and clogged up with countless Lego, Disney and Angry Birds apps for the kids I didn’t really dig in for the long haul. Now that it’s in my pocket, I can play it all day long. So now it’s time for me to issue forth (again) on what I think is one of the most significant games to date that has married the strands of tabletop and video game design.

Even though Hearthstone takes place on a touchscreen (or a PC monitor), it is 100% a tabletop game design and the designers at Blizzard went to great pains to make this game look and feel tactile. You don’t have to have a little deck-holder built into the onscreen game table, but seeing your cards fly out of it and then manipulating them by touching and dragging gives the game a genuine sense of being physically real. The UI makes those employed by also-ran digital CCGs like Shadow Era look prehistoric by comparison. Blizzard always makes an extremely polished, highly refined product and this game is no exception.

Refinement extends to the actual design, which at first blush is a standard Magic: The Gathering-descended game. Mana, attack/defense stats, keyword abilities and so forth. You can even use a lot of the same terminology to discuss it. But dig in and what you will find is a game whose designers have likely spent 20 years studying Garfield’s design and what made it so successful and then applying some judicious revisions to make it more accessible, more stable and quite possibly more fun.

One difference at the outset is that you pick from one of nine character classes. That class has a special ability and it represents your in-game ego- no vague “Planeswalker” conceit, no grouping everything into colors here. But more than that, your chosen class determines a base set of specific cards that you can use to build your deck to pummel another player into submission by reducing their life with minion attacks, spells and card effects. Each class has specific foci, strengths, weaknesses and unique strategies. On top of those class-specific cards, you also build from a pool of neutral minions to fill out your 30 card deck.

That’s right, 30 cards. That’s a very short stack for most CCGs, and in fact it’s well below the minimum in most other games. But that’s because Hearthstone runs tighter with typically shorter games and an automated mana development curve. There’s no need to figure out which ratios of which colors of which resources to load your deck up with, you automatically get one mana crystal a turn. So by turn ten (if it goes that long), both players are even stevens at ten mana. Of course, discounts and other card effects can shift that balance but the point is that you’ll never be “mana screwed” or find yourself top-decking a Plains card at a do-or-die late game moment.

But like any card game, luck of the draw plays a significant factor in any game regardless of how stacked your deck is with great cards. Both players get a turn one mulligan if they choose, and I’ve played many games where I felt like that choice almost decided the game. Visit any Hearthstone forum or discussion group and you’ll hear plenty of grousing about the RNG (random number generator) and I’ve cursed it myself from time to time. But the truth of it is that Hearthstone embraces the fact that luck is the great leveler in an environment where you might have a novice player that hasn’t spent a dime on the game competing with another who’s spent hundreds of dollars on booster packs and is coming to the table with a deck full of Legendary or Epic cards.

Which leads to the big, nasty discussion that is required about how Hearthstone is monetized. Yes, it is free-to-play and monetized via the purchase of booster packs, Arena entry fees and adventure packs. Yet there are no timers, paywalls or anything like that. When you break down a card you don’t want to generate Arcane Dust to build one you do want, you don’t have to wait three days or pay $5 or whatever to speed it up. You can literally play the game and never spend a single dollar, and I think you could do so and enjoy it at a casual level without a doubt- especially playing with like-minded friends. You can still earn boosters, arena tickets and other rewards just by playing the game. But yes, if you want to get the most out of the deckbuilding and really get involved with the game, you’re going to need to spend money. It is completely transparent, and it is completely respectful to both players that want to spend and players that do not.

For my part, I’ve purchased the adventure packs (Naxxramas and Blackstone Mountain) and have absolutely enjoyed playing these single-player options. They seemed expensive, but the series of challenging, puzzle-like bosses and the ample card rewards turned out to be well worth it and I’m looking forward to what’s next in that area. I’ve bought a handful of boosters, but most of my extra cards have come through earning gold by completing daily quests that challenge you to win a certain number of games as a particular class, cast X number of spells, kill X number of minions- those kinds of things. You can get a booster for 100 gold (normally two packs is $2.99) or you can get an arena ticket for 150 gold, which always gets you at least one booster and other rewards. It’s well worth it.

Arena is a draft mode, and it’s brilliant even though I’m absolutely awful at it. You get 30 choices of three cards each to build your deck and then you play against matchmade players until you lose three times. Then you get your reward. Do well enough and you can cover your fee to get back in there with a new deck. The game does a tremendous job of incentivizing playing it.

The Ranked mode is where most play occurs, and it’s a random ladder where you are matched up with similarly-ranked players. It can be frustrating if you’re paired up against someone who is running a class or deck type that just destroys what you are using, but them’s the breaks. You ain’t gonna win ‘em all. But the idea is to keep winning more than you’re losing to advance in rank.

But there again, I’m not very good myself so a lot of times I feel like I’m just beating my head against a wall. I’ll tweak a deck, maybe stick in a couple of new cards and try it again. This is fun to me, but I’m also not ultra-competitive and I’m not keyed into whatever is going on in the meta or whatever. All that is definitely if you want it, and Hearthstone can become a very serious hobby occupation if you so choose. There’s virtually infinite depth and variety, as is usual for a well-developed CCG, and there are always more cards to pursue to fill out a deck or to realize a certain strategy. Heck, maybe you want to have a completely gold-card deck- those are kind of like foils. God help you. I fall somewhere in between the causal and the hardcore and I’ve got my limits and expectations set. Much like most players, I suspect, in a game that has literally millions of them at this point. It’s really up to you how deep you want the rabbit hole to go.

Beyond all the debate over whether the game is “pay to win” or whatever, beyond whether certain cards or builds are broken, beyond whatever grief the RNG is giving a player what remains is that Hearthstone is a simply staggering piece of game design. Every time I play, I marvel at some subtle aspect of it or some unexpected combination of mechanic and situation. Quite frankly, I think it blows every other CCG that has come since Magic out of the water and not only because there are certain elements of it that could only happen in the digital space, but also because it is as close as any game has gotten to matching the genius of Garfield’s original design. It’s so clean, so unfettered by complication that it almost comes across as simplistic. But what you are really seeing there is the designers of the game acknowledging that a great design needs to be accessible, approachable and inviting.

I think it’s very symbolic that the game is visually and audibly framed as if you were walking into a tavern to play a game on a table with a real player. That’s another fine point that the creators of this game didn’t miss- that one of the things that made Magic great was that face-to-face interaction, even if here it is reduced to canned emotes. The community is huge, the meta intimidating but just as alluring as it is in real-world CCG play. But then I think of all the things that Hearthstone eliminates- even things like having to sort, store and manage a large card collection, having to find time to go to a CCG hall to play against real players who may or may not proper hygiene- and I realize that this is very much what the future of tabletop gaming could be, regardless of the luddism of the whole “gaming unplugged” set.