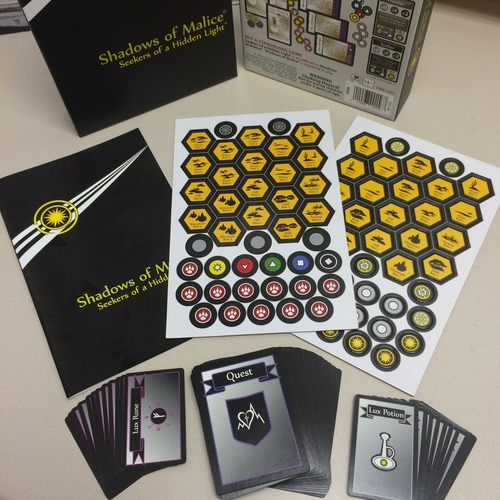 Jim Felli’s Shadows of Malice, which I reviewed just a couple of months ago, is one of the best games of 2015. It’s a fresh, almost “outsider” design that pretty much throws away the handful of fantasy board game design templates and does a couple of very unique things. With its random creature generation, a paradoxically vague but concrete sense of narrative worldbuilding and mechanics that support a tangible sense of actual cooperation beyond the usual whack-a-amole style of gameplay, Shadows of Malice is a maverick and even experimental design. If that’s all we ever got from Mr. Felli, we’d already have something of a treasure – even if it is, like fine art, not exactly for all audiences.

But there is more, and Mr. Felli is preparing to release Seekers of a Hidden Light, an expansion to Shadows of Malice. He was kind enough to forward me an early copy of it and I’m glad he did. I would regard Seekers as a must-have expansion for those already converted, but those new to the game may want to come to grips with the base game first.

I sort of raised my eyebrow at an expansion coming along so soon. And my suspicion about it was completely correct- the small box add-on contains material that could have been included in the base game. One of the complaints I’ve heard about the base game is that there isn’t much dimension to what players can do – you walk around and either visit Mystics/Cities or fight things. There’s no side-questing or anything like that other than the overarching goal to get strong enough to take down the Guardians at the Light Wells and to combat both Xul’Thul and his Shadows. This expansion completely addresses that lack by focusing on quests that the Avatars may optionally take on at the request of the Mystics.

READ ALSO:  The Tyranny of Challenge

And it demonstrates that the new material shouldn’t have been in the base game. With Seekers’ quest rules, the game almost becomes something of an “Advanced Shadows of Malice”. It doesn’t add much in the way of new processes, although it does expand the world-building quite a bit with all of this business about Lux potion-brewing Alchemes and Lux rune-inscribing Lumeres. This is not a suite of mix-and-match additions, nor does it supplement any of the card decks already in the game. No new masteries for the Avatars, no new treasures, no new Fate cards and no new potions. No new creature traits either.

Some may view that as a disappointment but considering the small number of all of the above that may feature in a given game it steers the expansion clear of being one of those bulk-adding cards that adds pointless variety rather than substantial material. What’s here matters much more than adding height to card decks. But it’s also still very open-ended, nothing fundamentally changes the course of the game or its primary objective. You don’t even have to pursue any of the quests if you don’t want to, and the decision to do so is one that you’ve got to weigh against the current situation on the board, what other players are doing and if there is even time to risk getting involved in one to try to reap the benefit of some very nice rewards.

There are four quest types, and all are issued by visiting a Mystic and spending an action. You get to pick which kind of quest you will pursue- Gathering, Harvesting, Hunting and Seeking. A Each type is progressively more difficult to accomplish because the specifics escalate. When you Gather, you simply have to go to a certain terrain type and make a Luck roll. Failed? Don’t worry, it gets easier each time you attempt it. But if you Harvest, you have to go fight a specific type of creature to harvest some part of its body. Hunt, and you’ve to fight a specific monster on a specific type of terrain. But if you really want to go for it, you can Seek, which means you’re looking for a specific monster, terrain AND ability color.

I read this in the rules and I thought “no way” because of how the random creature generation works. But then I read on and learned that all of the hexagonal, yellow counters with terrain types on them were bait that you could buy from Cities or Mystics. If you take on a quest, you’d better get some bait because these invaluable markers let you bump the creature generation roll around so that you can get what you need. They’re also helpful for treasures that affect certain kinds of creatures. This is a cool addition that in concert with the quests reminds me somewhat of the Monster Hunter video games.

Complete a quest and you can earn a couple of different rewards and not just stock Soulshards and potions. You also earn Lux, which becomes something of a shared currency within the group stored in the “Solux”. You use Lux to buy potions or runes from the aforementioned Alchemes and Lumeres. The potions are particularly powerful and offer very different kinds of effects from the standard drafts available throughout Aetheros. The Lux runes are expensive but attach to treasures, augmenting their power. Are the rewards worth it? It’s up to you decide. There are no timers, doom tracks or any other artificial methods of increasing tension to tell you one way or another. Talk it over with your band, see how the Lightwells are doing, and create your own trajectory.

The open-ended gameplay and compelling lack of ham-handed fantasy game tropes is completely unaltered. As a whole, Seekers fits right into the Shadows system with very little effort and it does not appreciably affect game length- and can even accelerate it somewhat since successful questing can lead to stronger Avatars. But I would still recommend that those new to the game cut their teeth on the system before applying the quest, bait and Lux. That said, I won’t play without them from this point forward.

I can’t stress enough how impactful this game has been on the way I view the whole fantasy/RPG-style board game. It isn’t really anything like all of those other ones over there (I’m pointing at your game shelf) and now it isn’t even really expanding in the same ways that those all have. Do I want more from Mr. Felli? Of course I do. But I also want any further expansions to be this casually meaningful, well-considered and indispensable. An excellent encore to a masterful performance.