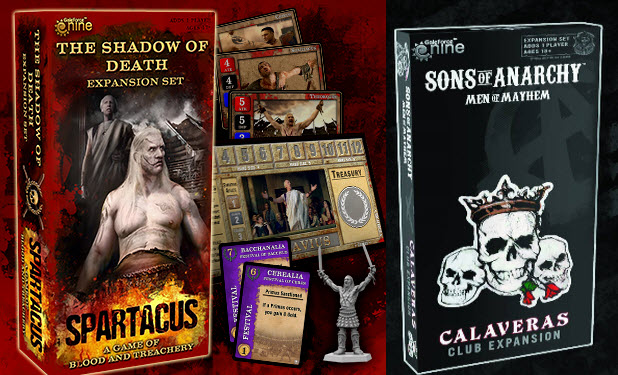 By now it should be understood that Gale Force Nine is the leading publisher of licensed games, at least in terms of quality. They’ve more or less carved out a specific niche for themselves doing games that are based on television shows rather than movies or video games and they’ve literally hit paydirt on every release to date. Even if you don’t like or haven’t seen Homeland, Sons of Anarchy, Firefly or Spartacus the games leverage their settings to explore the larger, more universal themes of these programs. And they’re all really fun to play games that fans of these properties should especially love given the attention to detail.

GF9 has also acquitted themselves well in terms of expansions. Their add-ons have run the gamut from simple “more cards” style additions to more substantial ones adding new playing areas and major mechanics. Two new ones have just hit the market, the Shadow of Death expansion for their first hit Spartacus and the Calaveras club expansion for the rather under-appreciated Sons of Anarchy.

Shadow of Death is a must-buy out of the gate for fans of Spartacus. I still think that it is the best design to come from GF9’s crack team of Dill, Sweigert and Kovaleski, and the new addition will give longtime fans plenty to cheer about – especially if you have several hours to spare and seven players on hand. A new house (Calavius) is added with a very cool Special Rule to neutralize another house’s Special Rule (effectively a Cosmic Zap) and they also gain influence when a Dominus hosting an event loses influence. How rude! But Spartacus isn’t a polite game, as evidence by the included “Cock Block” Intrigue cards.

The Intrigue deck also gains new Festival cards which enable players to effectively push for more multi-gladiator Primus events. The Primus was introduced in The Serpent and the Wolf expansion and some felt that it was an under-used concept. Previously, a Primus required a player to have ten influence to call one, but you can expect to see more as these cards go so far as to force a Host to call one. I really like the Primus and I’m glad to see more of them despite the fact that they can seriously impact the game’s length. I especially like the special events some of these festivals represent by stipulating, for example, that only Slaves can be used. It’s true that the Primus now feels like a more common, less exceptional event, but they are still an expensive affair in terms of influence (4-8) and you cannot use the support of other players so it isn’t like they are going to happen every turn.

You get three new gladiator cards and figures- Crixus, Theokoles and Spartacus himself. The cool thing about these new replacements is that each have special Primus-only abilities. Spartacus gets an extra wound on doubles and if his team wins the Primus, wager payouts are doubled. Crixus also has a double knock-on, getting an auto block and he can jump out and block in lieu of an adjacent team-mate. Theokoles isn’t allowed teammates in a Primus and he effectively gets to regenerate all of his dice during the event. They don’t call him the Shadow of Death for nothing. These are also great additions and the value they add to the Primus makes them appealing choices for the aspiring Dominus.

So if you’ve got one of these bad asses in your stable, you’ll likely want to let everybody know. New Boast tokens, mostly assigned by Intrigue cards, are applied to specific gladiator cards. Boasting tends to give you gold, influence or favor but if your much-ballyhooed fighter falls in the arena, you lose two influence to reflect your house’s embarrassment. This is a really fun mechanic. That Cock Block card mentioned previously? You use it to foil another player’s scheme and then you put a Boast on one of your guys. You figure that one out.

Shadow of Death works really well as an extension of the Serpent and The Wolf expansion and is probably best suited for those who have experience with that addition. That said, GF9 kindly provided the full Primus rules in this set so if you don’t have the earlier release you can still bolt this one right on to your base game. Good form. All said, I think this is a terrific release and it’s gotten one of the best games of the past several years back onto my group’s table lately. There still isn’t anything else quite like Spartacus on the market.

Sons of Anarchy was one of my favorite games of last year and although it isn’t as singular as Spartacus, it’s still a really well-done crime game with some compelling worker placement-derived mechanics, plenty of direct combat and loads of cock-sure intimidation. Also, tiny plastic 9mm handguns and duffle bags of porn and dope. I found myself on several occasions wishing that the design supported more than four players because it is simply the kind of game that cries out for a tableful of lightly intoxicated, potty-mouthed game players and the more the merrier at that. They did a Grim Bastards expansion that added orange dudes and a pretty fun club, increasing player count to five.

The Calaveras club expansion follows suit and brings in another gang that I know nothing about because I’ve never seen the show, but from what I gather based on their stats and abilities, this is a ruthless drug-peddling organization with lots of upstart prospects that the gang churns through for favor per their Gang Rule. They’ve got a pretty mean-spirited Club Order that enables them to spend an extra order token to prevent other combatants from calling in aid during a throwdown. The expansion is more or less just the materials (club card, miniatures, dice and some extra tokens) to play with this new gang either in a standard two to four player game or the extended five or six player game.

With that said, this expansion is hardly as impactful as Shadow of Death or other GF9 additions – it should be viewed strictly as a way to add another player to the game. I like the new club and I piloted them to victory the last time I played SoA but this isn’t otherwise an essential purchase. If you’re playing the game just fine with the base game, I would be inclined to recommend a pass on this (and the Grim Bastards) unless you’re a fan of the show and want a particular club in the game.

I’ve not played a six player game, but even with five that whole “more the merrier” thing I mentioned seems a little shaky. I think the core design is really at its best, come to find out, with four. It just gets a little messy and a little too long with more. Not that messy and long can’t be fun, but I’ve been less satisfied with expanded games of SoA at least so far. The box advises that it adds 30 minutes to playtime and I think that’s on the high side of an estimate, depending on who that extra player is.