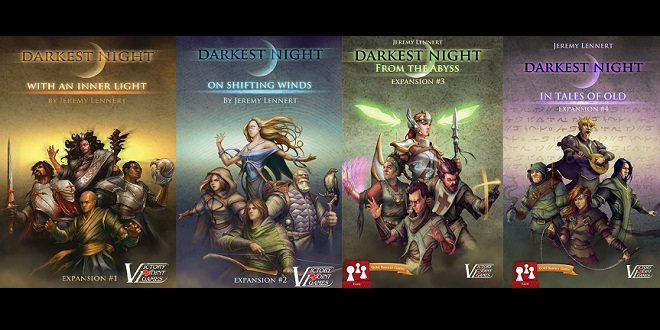 A couple of weeks ago, I reviewed Victory Point Games’ Darkest Night. Despite the appearance of it being another one of those dime-a-dozen co-op fantasy adventure games, it turns out that this is actually one of the best. It does a couple of things quite differently than its peers, not the least of which is that it creates a bold narrative wherein stealth and avoidance can be as significant to victory as choosing when to “go loud” and attack. Darkest Night is also a very well supported game with multiple expansions available, and since I like playing with all of them it’s only fair to follow-up on that very positive review with a look at the additional content that is available- some of which dramatically changes (and improves) an already great game. The first two expansions, the ones not called From the Abyss and In Tales of Old, are available as part of the “Necromancer Bundle” that Victory Point sells. The last two are, as of this writing, only sold separately.

The first expansion, With an Inner Light, kind of sets the pace for what you can expect from designer Jeremy Lennert fleshing out the system. At first blush, these are definitely “more cards” kinds of expansions but the thing about it is that “more cards” in Darkest Night tends to me “completely new ways to play the game. There are new Blights and more cards for every deck that aren’t so impactful, but you also get four new characters with a loosely religious flavor. There’s a Shaman that specializes in a sort of ritualistic, totemic magic. A Paragon is sort of a paladin that works great as a support character, using auras to buff himself or anyone in his area. A Monk brings a little “Oriental Adventures” flavor (for you D&D veterans) and packs a mighty wallop with some neat chaining abilities. The Crusader promotes a more aggressive approach to dealing with Blights.

But the big value-add is a new questing system. Without this expansion, the game lacks a wider sense of player activity and agendas. These are cards that turn up in the Event deck that place crises in locations that require specific actions to resolve. And these are usually on a timer, so there is a new sense of urgency injected into the game as it creates a more dynamic game world. Some quests even help you get those all-important keys to unlock the Holy Relics you need to beat the Necromancer. I can’t imagine playing this game without the quests at this point, and that makes this expansion essential.

The second expansion released was On Shifting Winds. It isn’t as impactful and to some degree it feels much less important. But with that said, there’s another four characters that are all unique and have virtually no redundancy with those that have come before. The new gang has a sort of nature theme- a Wind Dancer that has some capriciously unreliable abilities, a utilitarian Scout that does pretty much just that, a Wayfarer that specializes in exploration, and a Ranger packed with survival specialties. In addition to these interesting characters, you get even more new Blights and other new cards to increase the variety as well as a couple of new treasure tokens (consumables) to give you a much-needed edge.. I’d give On Shifting Winds a recommendation just on the characters alone since this game excels in distinguishing the differences between classes by literally completely changing everything about how each plays. If you’re getting the Necromancer Bundle, you’re getting it anyway.

Expansion #3 gets you out of the Bundle and into the wild beyond. From the Abyss continues the four-character/more cards/more blights trend with some of the more compelling characters available to date. These folks are in it to win it against the Necromancer by leveraging some really interesting magic and some more in-your face methods. The Channeler and the Mesmer are definitely not your typical fireball/lightning bolt/ice blast spellslingers, focusing on mental control abilities and astral transformations, respectively. The winged Valkyrie has retaliatory abilities and the Exorcist can receive holy boons (blessings) to combat evil.

And they’ll need all the help they can get because another new mechanic comes into play with this set, and it’s not on the good guys’ side of the Manichean equation. From the Abyss dramatically changes the base game’s Darkness track so that predetermined negative effects happen as the land falls under the Necromancer’s sway. Now, when you hit certain Darkness thresholds, you draw a card that you will likely not be too happy about because they’re all pretty ugly. I like the Darkness cards and it’s another mechanic that as far as I’m concerned is now permanently bolted onto the base game, but they also feel like another “event” type of card in a game that already has enough. With that said, one of the strengths of these cards is that you usually won’t see more than a couple in a game so they have a rarity that makes them more interesting from game to game. Flipping the positive back over to the negative, this is already a game that can beat you down so giving it another tool with which to do so feels almost like overkill. That, along with the more complicated (but interesting) characters make this ideal as an “advanced” expansion for players who have done the Necromancer in a few times.

In Tales of Old is expansion #4. It has been recently released and it’s another good one- and it has another “this changes everything” mechanic on board along with the new cards, new blights, new characters, et cetera. I think fans of this game will want to own In Tales of Old, despite the fact that what used to be a fairly compact game is now getting dangerously close to bloat. We’re still a ways out from Arkham Horror “expansion for the expansions” levels of madness, but after five releases –and I’m not counting a couple of promo items – this is getting to be a more cumbersome game.

But fortunately, the additions earn their place in the game but they introduce a looming question about this design, which we’ll get around to shortly. The big update is an all-new Mystery system which completely discards the old key-hunting of the game up to this point. That’s right, forget all of that stuff about finding three keys to open those chests containing the Holy Relics. Now, the players are tasked with resolving Mystery cards that pop up (like quests) in various locations. Solving Mysteries gets you Clue tokens (shades of Arkham) and when you have ten, you can “buy” a Holy Relic. Those that lamented that the original game felt like endless, random searching for keys will be relieved and I think that overall it is an improvement that adds more narrative and strategic options.

The characters are, again, an interesting bunch. Mr. Lennert has let the entertainers in on the battle against the Necromancer. The Bard can activate helpful melodies, making him definitely more of a support character. The Conjurer brings another interesting set of magical abilities to the table with a focus on materializing magical forces. I’m particularly fond of the Tamer, her powers include the ability to tame a boar, a nightingale, a unicorn or a sylph to help her out on the quest. The Alchemist focuses on artifacts and items as well as brewing up special tinctures- consider him the bartender of this motley crew.

Now, the problem that In Tales of Old begins to set up is that it does not feel seamless with the remainder of the product line. Throwing out the keys means that all the cards that reference keys still need to do something and there are still key tokens floating around in the game. It feels almost like the Quests from With an Inner Light are made obsolete by the even better Mysteries, yet you can play with both. It almost feels, to some degree, like the game has sort of developed into a “2nd edition” on the fly with improvements and evolutions sort of applied to it with each release. So it’s hard not to look at some of the material in expansion #4 as second takes at material that was in expansion #1- material that really should have been in the base game to begin with, because it really needed those quests to build out the world and give the gameplay more dimension.

Be that as it may, the game totally works with everything piled in there and there aren’t any side boards, complicated sub-systems, special trackers or other administrative overhead other than managing more active cards on the table at any given time. But I can’t help but feel that this game, at this stage, really needs that official second edition more than it needs a FIFTH expansion, which is apparently on its way. I love this game, I think it’s a top notch example of the genre and I definitely want Mr. Lennert and Victory Point Games to give me more but I’m worried about what a reboot might mean for a product line going on six releases deep.

One thought to “Cracked LCD- Darkest Night Expansions in Review”