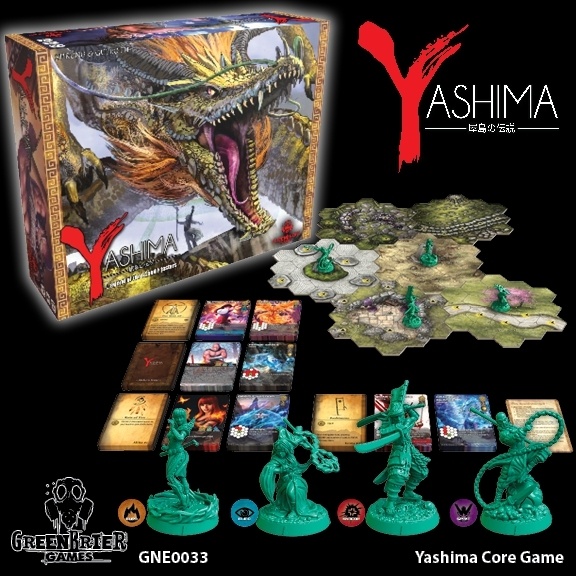 Yashima: Legend of The Kami Masters is a pitched battle between two to four combatants wielding the powers of the martial arts, magic and nature spirits. Think of it something like a cross between the arcade classic Yie Ar Kung Fu, a Chinese Wuxia film and the summoning spells from a Final Fantasy game. It is a focused concept rich with background story and setting, but without many contextual frills. There are no scenarios, there are no resources and there are no objectives other than defeating your foes. It is essentially a card game not unlike Yomi or BattleCon, but it uses hex-based terrain tiles and miniatures to express distance, position and the scope of attacks. I really like what I’ve seen from the game so far, but it also leaves me with a feeling that this design- which has great potential- isn’t quite to where it needs to be just yet.

I was drawn to Yashima first by the tremendously underused Asian fantasy setting, second by the promise of a simple, direct battle game with minimal setup or investment required. On both counts, the design scores high. Designers Joshua Sprung and Tony Gullotti have provided a cool setting and the notion of the Kami Masters partnering up with a Kami spirit is a neat idea expressed in the game by modular decks. A Master’s cards make up half your deck, the other half are a Kami’s cards. So you might be the furious Samurai-like Kenta, with his strong attacks and his ability to inflict a damage-enhancing Rancor, matched up with the highly defense Tortose Kami. Or you might decide to pair up the terrifying flame attacks of the Dragon with the master Rosamu, who excels in creating devastating chain combinations. There are four each of Masters and Kami included in the initial release, and it isn’t hard to imagine that more are on the way.

Each of these Masters also comes equipped with a deck of Tome cards. These cards are double sided and you flip them over like the pages of an actual book, so that only the Tome abilities you can see are currently usable. This is a fun notion, but it also kind of doesn’t make sense in the setting. Did Hikaru not memorize all her spells before heading out to the fight? Regardless, each character has a host of Karma-activated abilities that serve to distinguish them even further than their mix of cards and attacking capabilities.

Despite the modularity and variety of cards in the mix, the important rules barely take up two front-and-back pages and it’s easy to get players fighting fit in minutes. Once everyone is set up- and I do recommend making sure that all four characters are in every game, even with only two or three players- this is a fast moving, very direct game that is going to take you no more than 45 minutes or so to decide a victor. A round kicks off with a set of Action tokens (Move or Attack) placed on the table, one for each player. Each player then gets to secretly choose a Move or Attack token to add to the pool. Later, you’ll use these to active your Master and you will be limited to what is available for selection. There’s a chance to discard and redraw cards, and then all players draw a card to place in their Karma pile, which is also how the initiative is determined.

Tome actions follow, and the player may choose to Delve, meaning that they flip a page forward or backward to access a different pair of abilities. Strategically, this may be a critical decision as these allow you to equip weapons or other gear, enhance attacks or defense, or perform other special functions. During the Tome phase, you can play one of your visible abilities by paying its cost out of your Karma pile.

Once you’ve had a chance to fiddle around with a book out on the battlefield (at least that’s what it seems like), you pick your action token. Characters move a Speed rating and are limited to some degree by terrain types or by being “locked in combat” with an adjacent enemy. Attacking is more complicated, primarily because of how the targeting works.

Each attack card shows a diagram of your figure’s facing, surrounding hexes, and shaded hexes indicating where an attack hits. Some may hit two or three hexes in front of you in a line, where others might have a wide, sweeping arc and another might hit everything in a three hex frontage. The kicker (literally) is that you hit everything in the attack profile- even if you are playing with teams. This is a neat mechanic, but it sometimes takes a second to parse what exactly you can and can’t hit with- especially if your figures are like mine and are unpainted, because it isn’t clear which way the are facing.

READ ALSO:  The Tyranny of Challenge

An attacked character can play a defense card to soak up some damage. There is no life tracker or hit point marker in the game. All damage comes from either your hand or your deck, and only through special abilities or rejuvenating terrain can you get cards from discard back into your deck. One interesting mechanic is that attack cards and others that you “Use” go back to the bottom of the deck instead of discard. Once your deck is depleted, you aren’t exactly out of the game- you go into a special mode called “Restoration”. Your character card is flipped over and shows some slightly different stats and you have a chance to continue playing with a refreshed draw deck. Effectively, you have lost but you aren’t truly down and out until you are beaten a second time. In a team game (which is by far the best way to play), the team that has both Masters in restoration is the losing team.

There is some great stuff going on in Yashima. In addition to the excellent combat mechanics, there are status effects such as Blind and Burn that are given to characters, impacting their performance. Akiko, the resident pyromanic, can put Burn markers out on empty spaces- and then use a Tome effect later to explode them, causing damage to anyone standing by them. Rosamu’s chain ability lets him draw cards after attacks and keep going, as long as he keeps drawing cards with over 6 Karma, the chain ability and no duplicates of previously played attacks. There are Ripostes and out-of-nowhere evasive moves. There are throwing axes, magic boots and cards that you put face-up at the bottom of a deck, activating them when they make it to the top.

I love how focused this game is, but by the same token it almost feels limited. Battles tend to play out with a little maneuvering at first, an engagement and then maybe a couple of surprises but not as much maneuvering as you might think- even taking into account the attack template mechanic. So there’s a little more of a “clumping” effect, not uncommon in miniatures games with a strong melee emphasis, than I’d like to see. Some elements of the game just don’t quite seem relevant due to the superiority of attack over movement, such as the terrain types and facing. Facing isn’t even really relevant since you can change it before you play any card. Sure, the action tokens may keep you from attacking when you need to, but the result is often that you wind up with no option other than a Move that you neither need nor want. And a turn that feels wasted because of the limited scope.

It seems, then, that Yashima might work as part of a larger, unrealized game. I get a sense that this is sort of an introduction to the combat mechanics of a system that could grow to include things like specific objectives, capturing territory, some kind of “common” units fighting alongside the Kami Masters and narrative scenario design. The rulebook advertises a couple of upcoming expansions but it appears that they only introduce material similar to what is in this release. Which is good, and I do want them because I’m excited to see what new ice and forest content brings to the battles, but I also feel like the game needs more than “beat those guys up” to be a really good fighting game.

Oddly, the game reminds me quite a lot of the recent WWE Superstar Showdown. The games play and feel differently, but there is a similar impetus on positioning in a relatively small area paired with cardplay and counter-cardplay. This is definitely the more intricate and challenging title and it also has more potential to grow into something more fully developed.