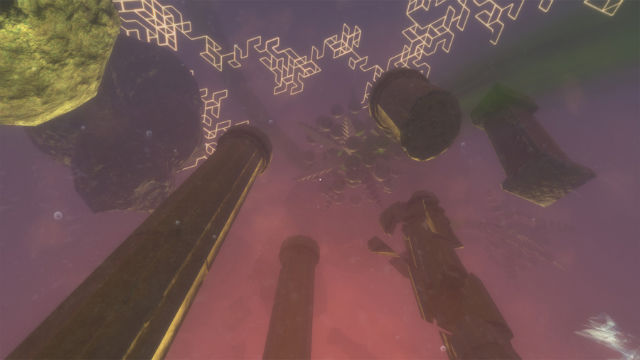 Falling is the primordial nightmare. Plunging into the abyss, then wakening with a jolt just before the impact is a fear we’re all familiar with. Yet Euclidean is the first horror game I’ve played which taps that shared terror. Then amplifies it with deliberately clumsy controls and freakish environments beneath your sinking feet.

Its in the design of these other worlds that Euclidean reaches its apogee. Lovecraft’s old saw about impossible geometries is, obviously, impossible to visualise. Yet Euclidean does a fine job of putting you into some truly bizarre places.

It’s unclear if you’re under water or in outer space, or possibly both. Strange patterns and bits of Escher-esque scenery flash in and out of view through the murk. One level sees you descending an enormous spiral staircase. Another is almost completely obscured in blood-red mist. The visual design is fantastic and disorientating in equal measure.

The confusing environments are very much part of the play. Touching anything as you fall will kill you, instantly. So will missing one of the soft blue portals you’re aiming for and ending up on the level floor. The are monsters wriggling round the levels too, and they’re equally deadly and harder to avoid.

Your defences against absolutely everything are some sluggish WASD controls. Plus the ability to phase out which makes you briefly invulnerable to monsters but lasts for less time and takes longer to recharge on each use. You fall at a steady rate, and use the controls to avoid bumping in to things. That’s it. Euclidean might qualify as the world’s first falling simulator.

The limitations on what you can do in-game are at once both essential to its atmosphere and its biggest issue. The scenery and the monsters move in predictable ways but the sheer oddness of the environments and the unresponsive controls makes them hard to avoid. You don’t have much agency in the game, and many of the very many deaths you’ll suffer won’t really be your fault.

Euclidean is not a great game. It might take you a couple of hours to complete. Then, if you’re not fed up of the limitations and fancy a bit of maschoism you can try the permadeath mode. But it is a very imaginative, unique and fairly cheap game. That might be enough to make it worth dipping your toe into whatever otherwordly goo fills Euclidean’s levels.

One thought to “Euclidean Review”