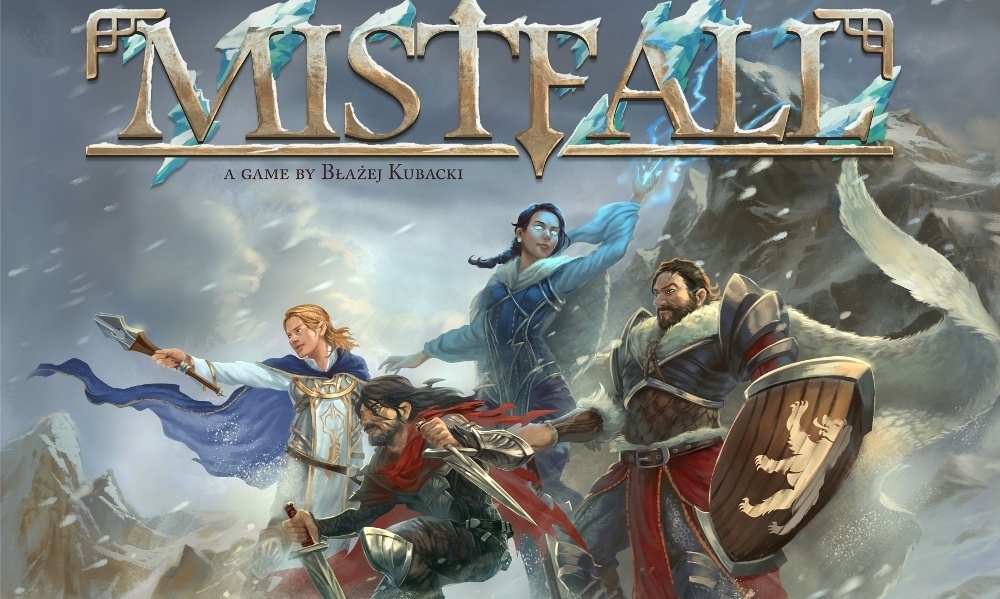 Mistfall, a new game from Polish designer Blazej Kubacki published by NSKN, is quite a piece of work. I think it’s very good and I would wholeheartedly recommend it to anyone that enjoys the Lord of the Rings LCG but doesn’t care for the dec construction, that thinks the Pathfinder ACG is too simplistic or that enjoys the intricate puzzle-solving of Mage Knight. We’re in similar territory, design-wise, as those three titles but the setting is a very well-crafted Eastern European-tinged fantasy setting that nips some of George Martin’s chilly atmosphere and creates a cool context for its unique characters to quest, battle and improve over the course of its scenarios.

However, there is one big wall separating the masses from engaging with Mr. Kubacki’s intricate, quite complex creation. The rules. This is one of those games where you might read the rules and respond with a colloquialism common in the American south- “do what now?”

It is also one of those games where the rulebook does a marvelous job of making the mechanical structure seem harder to grasp than it really is, even though this is hardly a simple design. Once you clear the hurdle of the badly organized but absolutely thorough rules-writing and arcane Euroglyphics, the gameplay itself turns out to be quite challenging to come to terms with. Once the process is nailed down, actually playing the game effectively is the next gate, and players should expect to completely fumble around for the first few games. Each character’s small deck of Basic cards provides a starting point with key combinations and abilities, and you’ll want to master- not dabble with- the heroes to get the most out of playing them. There is a definite learning curve.

But Mistfall, if you stick with it, is absolutely worth it. This is a compelling card game that leverages some standard fantasy gaming concepts to provide a unique experience full of tough choices, meticulous management of capabilities and some smartly implemented features that ratchet up tension and create interesting situations for both the co-op and solitaire player. Be warned that it is a game, much like Mage Knight, that I think excels as a solo offering because a lone player can really dig in and take their time to appreciate the gameplay and also work through the processes at leisure, without the pressure of entertaining a group. I would regard three or four players to be the maximum you would want to seat although more are supported.

Once you’ve got the characters sorted- an arcane archer, a frost mage, a shieldbearer and other setting-specific types- you pick a scenario from five included. They aren’t particularly detailed or complex, serving really more as a framework than an actual narrative. Each sets up a number of face-down location tiles, objectives and usually a boss-type antagonist. You’re also up against a time limit to complete whatever goals are laid out for you.

From a starting tile- the Hearthfire Inn, you move a party marker into an adjacent tile. It might have a special function affecting encounters there. You draw an encounter card matching the tile type (Wildlands, Deadlands or Borderlands) and follow the setup instructions, drawing appropriate enemies from three different decks. Each character has an enemy focus rating, which abstractly represents their threat to the bad guys. A Pursuit phase follows encounter set up, and the enemies that were drawn go to the hero areas of the characters with the highest focus, which goes down by half each time.

Once the skeletons, Ghoren, wolves and brigands have picked their targets, each hero gets to play a round to try to kill or relocate enemies out of their area. There is no dice. Weapon cards deal physical or arcane damage versus like resistances and also increase a character’s focus. Other cards can be played from hand or the ready area to increase damage or provide additional effects, but there again you might be increasing the amount of attention that the baddies are giving you and you might even convince them to call for reinforcements.

Once each hero has had a round, the enemies attack and players can use gear in the ready area or cards from hand to mitigate damage. All dealt damage comes straight from your deck- you must bury cards from your hand or discard pile, putting them out of play until you can rest. Run out of cards and you’re dead. After enemies attack, an encounter phase determines if you’ve done all that you need, if it is going to continue another turn or you can choose to flee. If you pass the encounter, there are rewards including draws from a deck containing “transient” rewards (read: potions and magic stones) that is also seeded with one or more special equipment cards for the heroes in the game. This is how the game manages progress- by adding cards to the heroes’ limited decks. You can also earn Resolve points and buy advanced cards, so there is a minor deckbuilding element in play.

The thing that makes all of the above especially interesting is how the cardplay works. You’ve got a five card hand, and cards such as gear and weapons can be placed into your hero area, usually as a “fast action”. Most items have multiple uses, so you might use a bow for lower damage and keep it in play or take a higher damage (and higher focus) option at the cost of discarding. And there is no reshuffle. But you might have an ability or Feat card that lets you place an “exhausted” card back on top of the deck. So if Crow the Seeker throws his dagger at an enemy, he might use his Utility Belt to put it back on to top of the draw deck. A big part of the game is learning how to manipulate and alter card states and to use them to your advantage.

As stated, burial is effectively wounds. Since there is no reshuffle, so the discard pile effectively represents fatigue. When characters rest at the end of an encounter, they get to move cards around- from discard to the bottom of the draw deck (refreshing used cards), from burial back into discard (healing injuries). This element feels sort of like Pathfinder, where you also had small decks and lots of manipulation, but in Mistfall it feels more strategically rewarding and diversified.

On top of the complex hand management, there is also the matter of puzzling how do X damage to Y monster while also planning for the defense phase and working out how you are going to move another enemy out of your hero area. All without running your Focus up and increasing the reinforcement value for the encounter. And then there is the brutal tick of the time cards that move the hourglass on down the line, sometimes enraging certain monsters and accelerating your doom.

It’s a lot to deal with, and it is not made easier by the ghastly rules and byzantine layout. There are also errata, misprints, omissions and plain old bad writing with which you’ve got to contend. This is a game that you are going to play with both the rulebook and and an online FAQ open at all times, especially in the early sessions. But trust me, after you get through two or three games where you’re not even sure you are playing it right, Mistfall clicks and reveals itself to be a sophisticated, unusually engaging design.