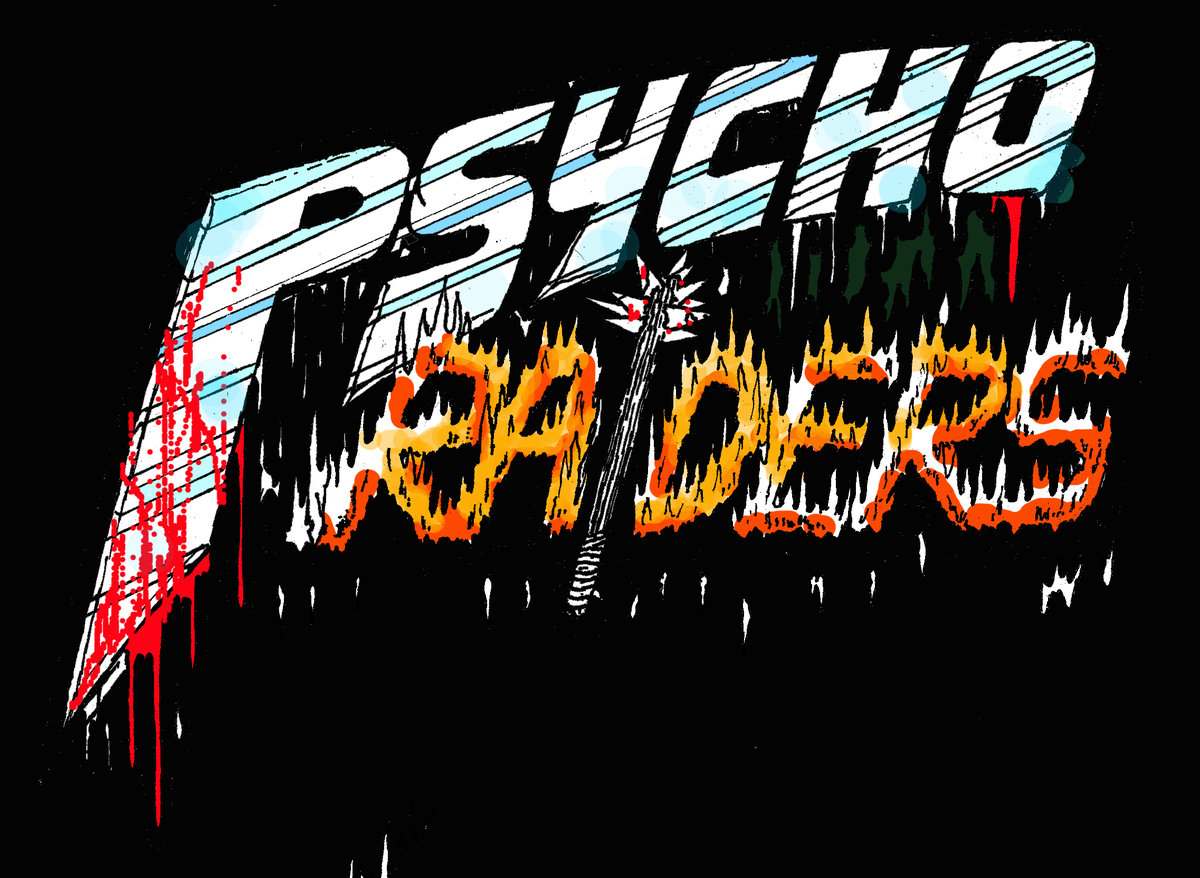 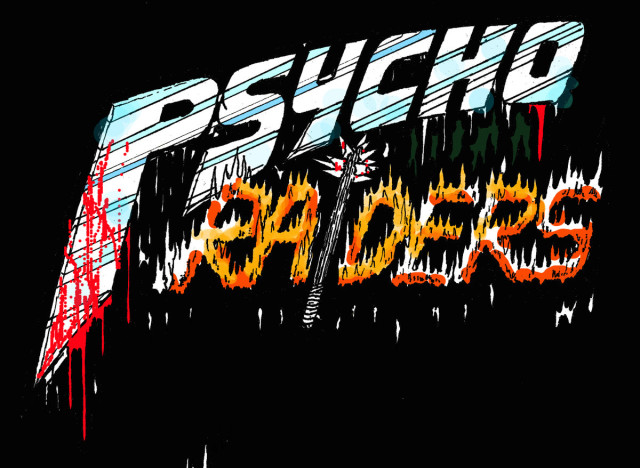 I love it when games have moments- those points where the narrative, the structure, the rules and the interaction all come together to equal something more than a group of people rolling dice and pushing counters around with a context mostly held together with pictures and nomenclature. Nate Hayden, one of the best game designers working today, blew me away last year with The Mushroom Eaters. A game full of moments. I named it my Game of the Year last year because that’s what you do as a critic when something has a profound effect on the way you think about whatever medium it is that you are criticizing.

Psycho Raiders, which Mr. Hayden and his gang released last year as a “Halloween Horrorgame Magazine”, had a moment. Fleeing from the titular murderers that had already immolated their friend, three young campers on Halloween night in 1978 made it to the outskirts of a small, rural town. They managed to scream loud enough to alert a mechanic in the gas station. He grabbed a hammer and ran outside, seeing these kids running from a black van and a couple of gas masked psychopaths on foot. The mechanic threw the keys to a fixer-upper parked under a streetlight to Randy, who had been injured when the Psycho Raiders attacked his pickup with a flamethrower. Ginger had run alongside Randy, while their friend Dawn made a run for the woods.

All three made it to the car. The mechanic stalled one of the raiders, attacking him with the hammer. The van sped along the road while the kids got the car going. Randy floored it. And flipped it on the first turn out of the gas station.

All three crawled out. Randy told the girls to run for it. He picked up a tire iron, badly hurt by this point but determined to fight back. Torch, the raider with the flamethrower, blasted him again but it wasn’t enough to kill him. But it still set him on fire. He was about to die from burning on the next turn.

And then it started raining. The friend I was playing with uttered “bullshit.” We cracked up, because what else are you gonna do but laugh at that?

With the fire out, Randy lunged and smacked Torch with the tire iron. But Beau, one of the other Psycho Raiders stood by and laughed, jabbing their victim with a rusty old saber. Randy just wouldn’t die. He took a swing at Beau, but he dropped the tire iron. Beau stabbed him through the eye.

It was such a strangely sad, grim moment. Randy was at the end of the line and he knew it. But he grasped at every chance he could take. It felt like he deserved a better end, and when it rained on him it almost felt like there was a shot at survival. But when he dropped his makeshift weapon- bloody, burned but still fighting- it was like this nihilistic collapse of goodness, courage and hope punctuated by a bloody red KILL card.

This is the root of what makes Psycho Raiders great. It’s brutal, violent and it has that same sense of grand guignol seediness that permeates the kinds of gritty horror films that the game is clearly referencing. It’s a game that is not fair. It does not seek to empower its players. It does not serve to make anyone feel smart or clever. When playing as the campers, it captures a sense of being hunted down and slaughtered by amoral, remorseless human monsters. When playing as the Psycho Raiders, it puts the player in the role of soulless, evil gods of death deciding not if people are going to die, but how mercilessly they are going to die. It is the perfect horror game that accomplishes a level of psychological terror that I, for one, previously thought was not possible in game design.

Needless to say, this is not a game for everybody. It’s rated X and it means it. This is savage, questionable entertainment rife with the very blackest of humor and heavily influenced by 1970s exploitation films. It’s the tabletop equivalent of a video nasty. Yet it is a game that should be played by anyone that thinks they understand what atmosphere, theme and narrative mean in the context of a gaming hobby currently bogged down in a morass of bloated production values, redundant structures, a despairing lack of risk-taking and a complacent fear on the part of designers to challenge players to expect more.

Ironically, this is a game that could have been published in 1980. The very specific, simulation-oriented rules call to mind classic SPI or Avalon Hill adventure games, not Fantasy Flight or Z-Man ones. Most of the game is very simple and familiar in terms of movement and combat, it’s all classic hobby gaming structure. The map is paper and printed right there on it are all the tables you need to roll on for results. Be prepared to bring your own dice, cut the cards out yourself and supply players with pencil and paper. If all of that sounds barbaric to you, maybe give Psycho Raiders a pass and go play Last Night on Earth instead.

It’s old fashioned and out of fashion, but there are two masterstrokes that modern designers should be paying attention to. One is the hiding mechanic, which lets players place and move multiple on-board tokens to obscure where they actually are. The other is the best use of the tired, hackneyed “traitor” mechanic I have seen to date. There are a couple of townsfolk that can enter play like the mechanic mentioned above. The Raider player can secretly designate a die roll’s worth of the townsfolk to be sinister and on their side. What’s more, the Raider player can actually let the campers use the townfolk and decide at an opportune moment for them to show their true color, which is of course always black.

There are also many details such as rules for screaming, unsafe driving, for using a telephone, for weather, for spreading fires and for tear gas. There are rules for if Joey shows up in his Camaro as a kind of white trash Deus ex Machina as well as other events that could happen. You may never see any of these things happen because the gameplay is wide open- how the story of these campers on the run from the Psycho Raiders is entirely up to you. Situations like the moment described above may occur once but never again. This is truly emergent gameplay enabled by relatively loose rules and a masterful design-level grasp on balancing playability, simulation and narrative. 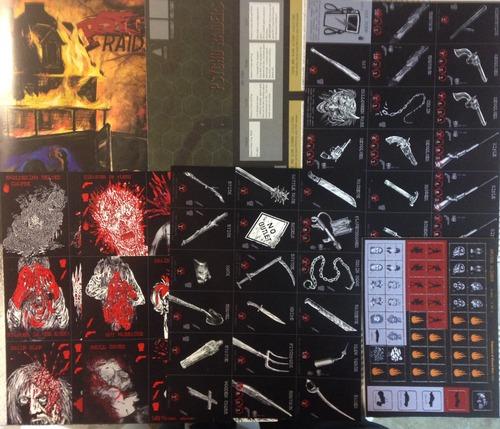 The old timey packaging is absolutely brilliant- it is an old fashioned magazine game. The components are a paper map, a few counters and some cards that you have to cut out yourself. The illustrations are willfully crude, unrefined and raw. If you expect every game to be stuffed full of possibly toxic made-in-China plastic and kitschy-ass fantasy artwork, you might mistake this game for ugly or cheap. But the slightly sleazy, off-putting visual design is absolutely part of the package.

READ ALSO:  What “Next Generation” Means to Me

You even get a gas mask-wearing underwear model in the centerfold, standing in front of a wood panel wall with a cheap Halloween decoration on it. It’s the kind of slightly upsetting thing that makes you feel like something is wrong either with the people who made it or with you for buying and owning it. Flipping through the magazine, which contains the rules, there are several weird cartoons that range from surreal to disgusting. There’s an upsetting piece of short fiction. This stuff is as transgressive as board games get. This stuff is as immersive as board games get.

But most significantly, the magazine also includes a comic that serves as a direct prelude to what occurs in the game. Turn one literally picks up right from the last panel, with the campers’ pickup barreling down the road with the Raiders’ van right behind it. From there, the players finish the story. This is how background story or fluff text should be done from here on out.

Psycho Raiders actually came out last year but for various reasons it was one of those games I never got around to. At this point, it’s clear that I was wasting my time looking for transcendent moments in other games. This is the real deal, this is the mythical, Utopian game I’m always on about that is innovative, progressive, playable, narrative, thematic and compelling. It’s every bit as good as The Mushroom Eaters, and as such I’m appending my 2014 Game of the Year award to include both games released last year that have Nate Hayden’s name on them.

This is an incredibly renegade, daring piece of game design and packaging that makes me want to buy a copy for every single person who has ever used the asinine turn of phrase “dripping with theme” and one for every person who thinks that anything coming out of the morass that is Kickstarter is anything approaching “innovative” or “progressive”. It would be an object lesson in what a truly maverick game product should look and play like in 2015, even if it is defiantly and gruesomely atavistic.