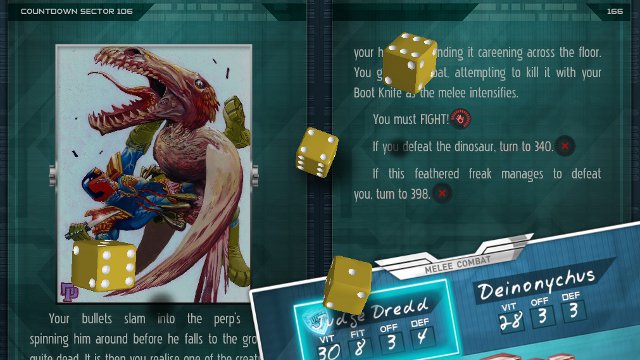 I have never been a particular fan of the famous 2000ad comic, in spite of it being a central fixture in the life of most British boys and indeed nerds. But I can’t say the same for its central character, Judge Dredd. I’ve devoured the stand-alone trade paperbacks of his exploits many times over, and played the related board games many more. So you can imagine my delight when I heard Tin Man Games were bringing a Dredd gamebook to iOS, and the further delight when they offered me a copy to review.

Countdown Sector 106 posts you in the boots of the famous lawman himself, drafted in to help out with routine patrols in a sector that’s suffering a shortage of personnel. I have to say that I think the set-up is a bad choice. For starters casting the player as Dredd himself immediately sets the bar very high indeed in terms of writing and story. And Judge Dredd is famous for busting psychotic cursed earth gangs and extra-dimensional psychic entities, not doing routine patrols. Of course we all know Dredd has to do grunt work some of the time, but building an interactive adventure around his everyday experiences? Not such a great idea. You get to feel like you’re a judge in Mega-City, but at no point do you get the sense that you’re the epic man Dredd himself. 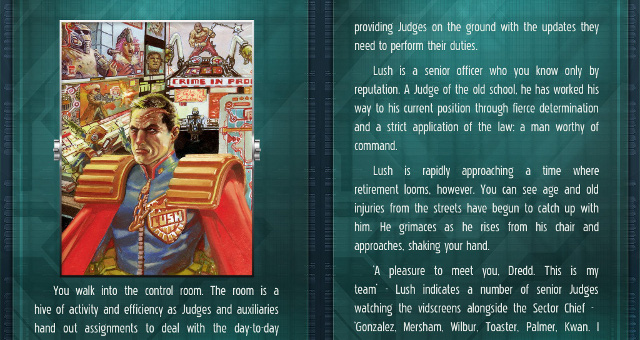 The issue is compounded by the writing style. Author Nick Robinson claims himself as a big 2000ad fan and it shows: his tale skillfully weaves in all sorts of mega-city tropes from colloquial language to the likely contents of department stores. Unfortunately he seems to think this familiarity is a substitute for strong characterisation and pacy, colourful writing. Too often the narrative lies flat and lifeless on the page, and it fails utterly as regards the political and darkly humorous overtones for which the comic strip is rightly famous.

However, Mr. Robinson has done a bang-up job when it comes to plotting a course through the numbered paragraphs of the book. The options you’re presented with are often numerous and always help to bring home the dilemmas that Dredd’s everyday activities would present him with as regards juggling the collection of evidence with the need to apprehend perps and a healthy dose of self-preservation. The good choices are subtly hinted at but rarely obvious and the overarching plot does a great job of tying together a disparate bunch of flavourful events into a coherent whole, allowing you to experience many of the delights of Mega-City without feeling like you’re being railroaded. 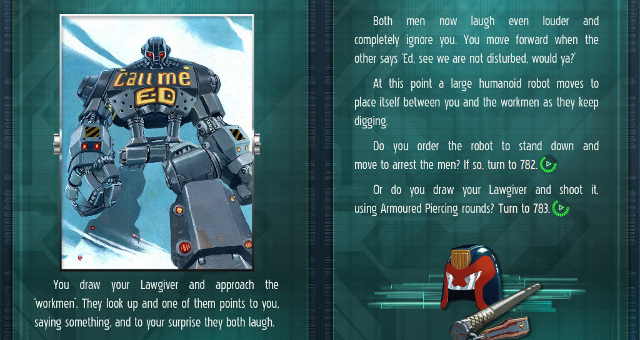 One issue I have had with all the Gamebook Adventures series is the combat system which is clumsy, overly protracted and prone to wild swings of fate. Countdown Sector 106 uses the same system for hand-to-hand fights but introduces a new shootout mechanic for gunfights. It’s based on a single dice roll and so is much faster and cleaner. It’s also frequently used to present the player with tough risk management choices: they can attempt a difficult gunfire role to take down all the antagonists but risk leaving them all alive, or try a lower value roll to to take down one or two and leave the rest for melee combat. The system works really well, and I hope to see it replicated in future titles.

Another thing all the Gamebook Adventues that I’ve seen appear to have is a good achievements list. This isn’t something I’d normally find worth mentioning, but with gamebooks on mobile devices I’ve found it to be a big incentive to really explore the title, tick all the boxes and thereby get maximum value from the book. The usual suspects are here, including a worthy nod to an icon of British geek culture, and you can also collect the artwork you’ve found in the book, all of which is of the high quality you’d expect from a famous comic strip character. But there’s another neat addition specifically for this book: the perp record sheet. This not only tracks which criminals from the book you’ve successfully hunted down, but gives you a portrait and a short biography for each one that you’ve caught and sent to the cubes. For a budding judge, it’s hard to imagine a better motivation for replaying the book.

Countdown Sector 106 doesn’t endear itself with its bland paragraphs and flabby writing, but once you’re stuck in it more than redeems itself with pacy moments, background colour, a thrilling plot and challenging decisions aplenty. It’s a great way to whet your appetite for the upcoming Dredd feature film, and a welcome return to gaming for one of Britain’s finest exports.

Tin Man Games, having published the most successful series of gamebook apps on iOS so far and fresh from winning the licensce to release actual Fighting Fantasy books, continue their run of form with a brand new Judge Dredd book to whet our appetites for all things Mega-City in advance of the new film later this summer.

Casting you in the boots of the legendary lawman himself, Countdown Sector 106 features additions to the well-worn gamebook adventures mechanics to mimic the sorts of fast-paced firefights you’d expect.

Written by a long-time 2000a.d. fan this looks to tick all the boxes for a quality experience. But there’s a full review in the pipeline, so I can let you know for sure once I’ve had the chance to play through it.