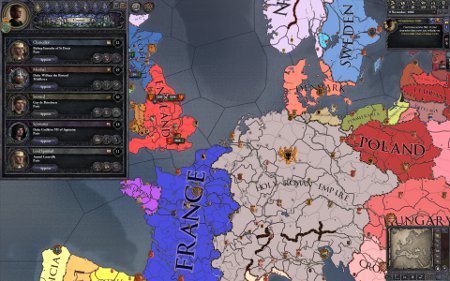 Note: I wrote this about six hours ago and, of course, the wireless here has been non-functional all the live-long day, so I’m only getting to post it now. It figures, the one time I’m timely with something…. sigh.
I just got out of the Paradox Convention 2012 press conference, in which we heard from CEO/”Lord Protector,” Fred Wester as well as their business development specialist and producer/”Corporate Paladain” Shams Jorjani. Now, it’s imporatnt to note these sorts of things are built with the express agenda of getting people like me to say nice things about the company. This cannot be denied. That said, it’s really easy to like this company.
There was a lot of talk about improved sales numbers (seriously, these guys are making money hand over fist), but it’s how they’re thriving –by focusing on publishing into niches that other larger publishers tend to ignore– that makes Paradox interesting. I’ll write more about this stuff later, when I’m not running out of time before dashing out to start a day-long stint of game demos. But for now, here’s the stuff they’ll be showing off this week, which includes three newly annonced titles (no, really, they were just announced for the first time in the last 30 minutes; for once, I’m timely):
The new three…