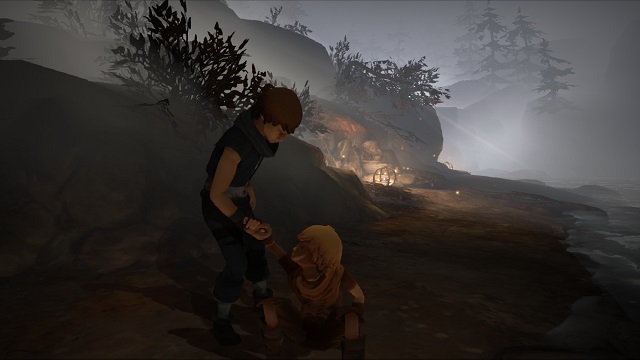 I played Brothers: A Tale of Two sons over a month ago. I sat down on a Saturday afternoon, looking for a break helping my kids cram a month’s worth of science project research into a single weekend. I had no clue what kind of experience I was in for. I thought it was just a cutesy game about two brothers, which you control simultaneously, where you spent a few hours overcoming obstacles, got a happy ending, and then forgot about the game forever.

About three hours later I sat, dumbfounded, as the credits rolled. I don’t know precisely how to frame what this game is, but I do know there is no other game of any kind or length that had me from the word go and wouldn’t release me until it was finished with me rather than I with it. Forgettable it is not.

The question becomes how to describe what makes it so unique and so special. The game, at its core, is horribly manipulative. It’s also heartfelt and full of wonder and sad and note perfect. I’ve put this post off for weeks because I simply do not know how to write about it. I don’t know how to do justice to what Starbreeze Studios has concocted.

After the break, I take my best shot in a deeper, rather spoilery dive… 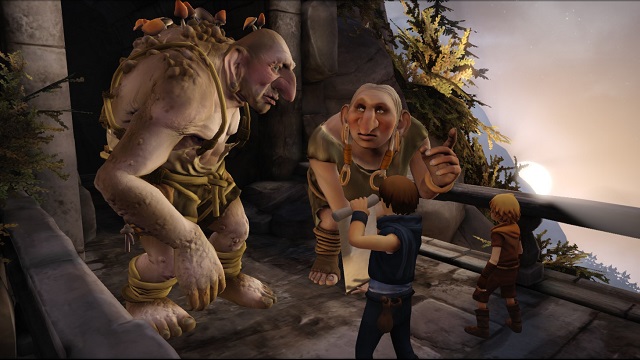 A Tale of Two Sons begins with the youngest of two brothers unable to save his mother from drowning in stormy seas. It’s emotionally charged, sure, but nothing we haven’t seen before. Fifteen minutes into most any Disney or Dreamworks animated movie and you’ve seen the introduction of a character who’s endured some kind of tragedy. Our protagonist must have inner turmoil, after all; doesn’t mean the rest of the tale isn’t filled with cotton candy and unicorns and snow princesses singing Let it Go. And even though, some time later, dear old dad is sick and the boys must go on a quest for a cure, what you see during the opening hour of the game is a full plate of sweet musings. The boys can interact with almost everyone on their way out of town, whether it’s to stop and pet a friendly cat or to tease the drunkard on the bench or give the local bully his just deserves. It’s all innocent.

Then you hit the troll caves and some of them are nasty, but you help a couple of them out and they’re nice to you and, hand-in-hand, they help see you off for the next phase of your journey. This is all set up. It’s a very successful attempt to lull you into a false sense of security. At this point you know the game will have drama, but you’ll face it head on, overcome some clever puzzles that make you feel smarter than you actually are, and everything will be wonderful. Because that’s the script we all know. We’ve seen and played it a hundred times already. And whether it’s brother The Older assuring brother The Younger that he holds no blame over him for their mother’s death, or the rescue of a young girl, or a wild aerial ride on a hang-glider, it offers the perfect balance of tension followed by wonder, followed by achievement and warm fuzzies. It does these things for one reason and one reason only — so it can take it all away. 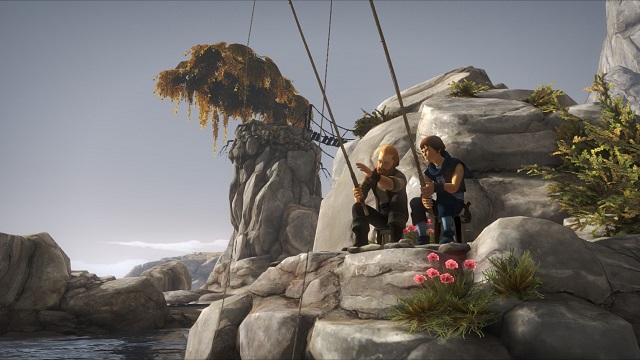 By the time you reach the climax of the boys’ journey, you begin to sense the script changing. Deep down, as you drag your mortally wounded older sibling to a tree stump and leave him there, promising to return with aid, you know that this story has curdled. You just don’t want to know it and so you press on. You get the magic elixer. You return to the lifeless form of your brother and you believe with every fiber of your being that this will be when the sun comes back out and you both return to dad and you live happily ever after. It has to happen that way because anything else is unthinkable. And, ever so briefly, Starbreeze lets you cling to that notion. It lets you have your happy ending. Until it doesn’t. They’re taking the knife, the one they slid ever so carefully into your gullet, looking you dead in the eye, and giving it that extra twist. And they’re doing it just because they can; because they want to give you that brief sensation of warmth and comfort before they strip it all away again and leave you sitting on the cold, hardened earth.

Your return home offers no triumph, but it does offer you a glimpse at how The Younger has grown, the strength he has gained from his experience. It does so, brilliantly, through a single press of the gamepad trigger. It’s an act you perform a thousand times in the game. It’s reflex. But not here. Here it is loss and gain bittersweetly intertwined and it’s the only way to reach the end of the journey. But even here, Brothers isn’t done with you.

You’ve returned. You’ve overcome your fears and you’ve rescued dad. And your reward? A second gravestone and a broken father on his knees as you, in turn, stand above him. You’ve lost your mother, your brother, and by all given accounts your dad has checked out, so you’ve likely lost him too. And what have you gained?

Finding the message here isn’t easy. Life is hard, wear a helmet? There are certainly grounds to argue that this game is simply manipulative for the sake of being manipulative. But all narratives manipulate. The question is how effective is it? Guessing where it’s going before it gets there doesn’t mean it’s not effective. It just means you’ve got your smarty pants on. So, it’s tempting to ask, what exactly was the point of all this? Why would anyone want to subject themselves to it? I suspect the point is the same as in any tragedy — to feel. 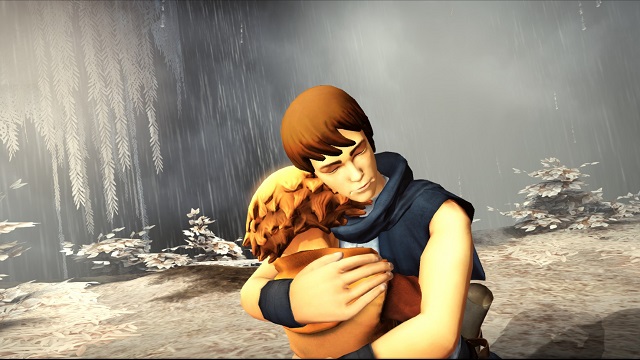 This is a sorrowful game, but it’s not a game about sorrow. It’s not even a game about loss, really. It’s about the importance of the journey. It’s about what people give to each other along the way. It’s about knowing how to feel and embracing that full spectrum of feeling. Life is not joy and it’s not sorrow. It’s disparate moments of both of those things spread across time, while mostly ranging in places in between.

Brothers: A Tale of Two Sons is an opus that Starbreeze composes and plays expertly, without a missed beat or an off-tune note. It is one of the single most memorable games I have ever played and if you haven’t yet, even knowing what you know now, you should take the four hours out of your life to experience it. There is so much more to the measure of this journey than how it ends or in this quick summation of how it gets there. Take in the lives of these two brothers for yourself. Celebrate with them. Mourn with them. Remind yourself of what you know already — that the journey matters.