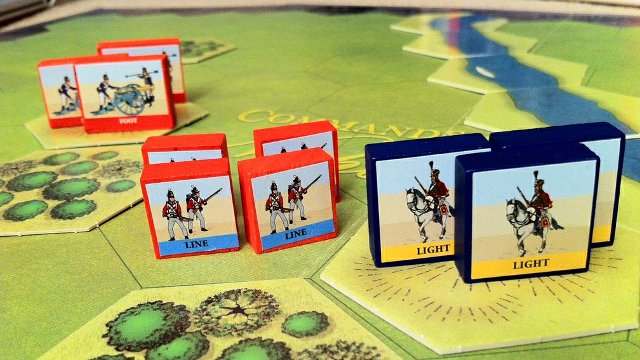 You may recall that at the start of last weeks’ Commands & Colors: Ancients review I stated that there were a number of games based on the system, and that wargame publisher GMT had sent me a big box of stuff related to it? Well, next in the spotlight is the recent Commands & Colors: Napoleonics game, which transplants the action to the fields of early 19th century Europe and the famed conflict between England and France. This is a particularly interesting one to talk about because rumour has it that designer Richard Borg originally designed the Commands & Colors system from Napoleonic warfare. If that’s true then it’s taken a surprisingly long time for the actual game on the subject to appear.

If you missed that review last week but are reading this one, here’s a brief recap of the basic rules system that underpins all the Commands & Colors systems. The board is divided into three areas, left, right and center, and each player has a hand of cards most of which will allow the movement and attack of a certain number of units across one or more of those areas. So, one card might say three units in the center for example, another might be one unit in each area and so on. One card is played each turn. This is a very simple and intuitive way to model the chaos of command and control in real-life battle situations where your subordinates might well be unaware of or unable to comply with your orders for reasons beyond your control. Usefully it also offers some interesting tactical and strategic decisions, both on board and in terms of hand management, for the board game player. This model still makes pretty good sense in the pre-radio era of Napoleonic warfare. Each unit is made up of a variable number of blocks which are removed as the unit accumulates damage in the dice-based combat system until all the blocks are gone and the unit is destroyed.

A lot of the rules framework seems to have been borrowed from GMTs earlier and extremely popular implementation of the system for Ancient warfare. There are still a lot of unit types most of which have small, annoying but critically important deviations from the basic rules structure such as the number of dice they roll or the number of blocks in a unit. This has lead to some curious artefacts, such as the fact that Leader blocks carry with them a substantial amount of extra rules weight in spite of the fact that, although useful, they’re nowhere near as critical as they are in Ancients. But if you’re familiar with that particular game, you shouldn’t need to expend a whole lot of effort to pick up the rules for this one. 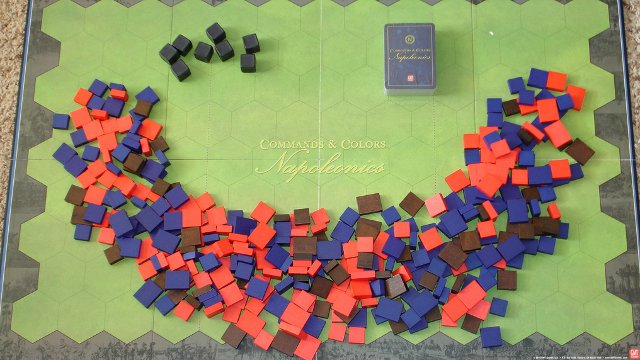 So what’s changed? There are two key differences that distinguish Commands & Colors: Napoleonics from its peers in the system. The first is a set of rules specifically designed to mimic Napoleonic tactics, specifically the ability to cavalry to run away from infantry attacks, for infantry to form square against cavalry charges and for artillery to combined their attack dice with infantry or cavalry assaults in a combined arms attack. The other is that in this game, and this game alone, the number of dice a unit rolls in combat is related to how many blocks there are still in the unit. This is a very curious change because the fact that units fought at full strength regardless of damage until destroyed was a major source of criticism for all the early Commands & Colors games. The given reason was that large-scale military units often do function reasonably effectively until attrition in morale or numbers makes them suddenly collapse is not entirely unreasonable, but I could see no good reason why the same logic should not apply to Napoleonic warfare. Why was this chosen to be different?

My initial, cynical, assumption was that this had been done simply to differentiate a new product from its predecessors in what’s becoming a fairly bloated product range. I am pleased to say that actually playing the game proved me to be wholly wrong. The combination of attritional damage and the Napoleonics-ear specific rules together is what gives the game its authentic, realistic age of rifles flavour. Infantry advancing across open ground will likely be severely depleted before they can return fire, and the job of you as the commander is to utilise other unit types, terrain and lucky command cards to ameliorate this effect as much as possible. Without the dice-per-block rule, it’d be trivially easy to advance and then assault at full strength. The new rules do not only give the system a properly Napoleonic feel, but make the required strategies and tactics for success subtle and well differentiated from other Commands & Colors games. Gamers well versed in previous iterations of the series should still find plenty of challenge here. 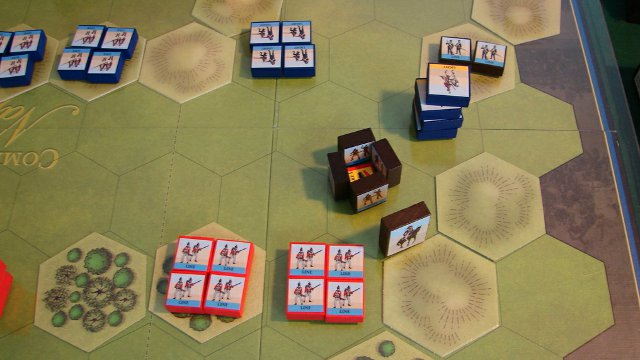 I am, however, left wondering why exactly they’d want to bother looking. Whilst certainly a good and interesting game, Commands & Colors: Napoleonics suffers from a very unfortunate problem of simply not being quite up to scratch when compared with other Commands & Colors games, even from a variety of different angles. It isn’t quite as deep and satisfyingly realistic as the Ancients game, but it has the same issues with the substantial weight of rules feeling a little too much for the chaotic system that underpins it to bear properly. It isn’t as quick playing, lightweight and exciting and Memoir ‘44 but it has the same considerable set-up time because (unlike Ancients) terrain plays a vital role, and all the scenarios have plenty of hexes to add to the board. It’s neither one thing nor the other, and I can’t see all that many circumstances where I would pick this over one of those two games.

This is unfortunate. There’s a quality game in this package, one that I enjoyed, and one that designer and developers clearly worked hard on to give it the necessary Napoleonic flavour, and for the most part succeeded: it’s just that in the process they also created a game that fell into the valley between two peaks. I’m certain now of something I have only suspected before, which is that the world now has enough Commands & Colors games and their associated expansions. It’ll be interesting to see if other gamers hit the same burnout with the upcoming Samurai battles iteration. In the meantime, if you’re a particular aficionado of the system, or of Napoleonic warfare, this is well worth your time and money to check out. For the everyone else, the existing games in the lineup should prove sufficient.