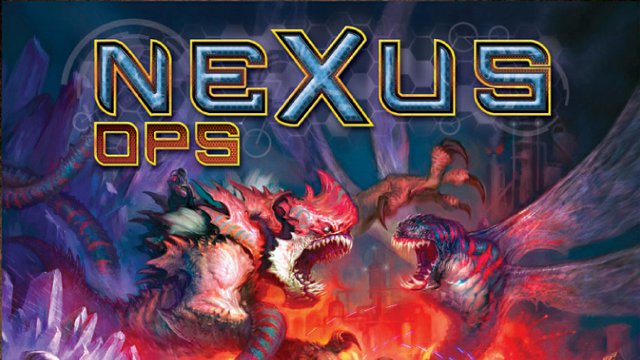 When Wizards of the Coast resurrected the Avalon Hill brand and used it to push out a variety of fast-playing, relatively simple dramatic, narrative-packed games that would have undoubtedly made the staffers at the original Avalon Hill very proud, there was considerable surprise. But what’s perhaps more surprising is that the title which was widely considered the best of those games, Nexus Ops, was allowed to go out of print and never got re-released. Trust Fantasy Flight Games to pick up the slack and make sure gamers got to have another bite at this particular cherry, and they were good enough to send me a copy so I could see for myself what they’ve done with the license.

At first glance there’s little that’s particularly ground-breaking about Nexus Ops. It’s a science fiction game where players use the income from mines they control to buy a variety of human and alien troops with different stats and abilities which then issue forth across a random geomorphic map to do battle and hopefully gain control of some more mines so that there’ll be more money for more troops on future turns. Its design lineage is thus vast and ancient, although it has a very clear relationship with venerable World War 2 dinosaur Axis & Allies in the form of sharing a combat system. But leaving it there would be doing Nexus Ops a vast disservice.

For starters games of this ilk have traditionally been long and complex affairs, frequently governed by an overarching diplomatic meta-game of unstable alliances and unconvincing pleas to attack other players which was as important, if not more so, than mastery of the mechanical strategies of the game. Nexus Ops is neither long nor complex: it takes ten minutes to teach and about thirty minutes per player to complete. And whilst you can certainly do a bit of negotiation to enrich the experience if you so desire, it’s certainly not allowed to dominate the strategy of the game. As a result the game also scales very well across two, three and four players, as it’s hard to meaningfully gang up against a single unfortunate player. 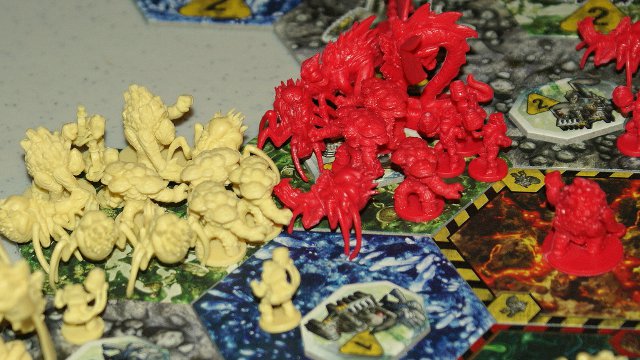 The secret to this startling transformation is actually very simple. Instead of the fixed territorial or economic win conditions of most games of this ilk, Nexus Ops works on a victory point model driven by a very large and diverse stack of mission cards for the players to complete. Winning any old combat will net you a point, but depending on what cards you’re holding you might get bonus points depending on where the battle was fought, what units were involved, which special abilities they deployed and how many died in the course of the fight, sometimes even if you lose. This means that a clever player can continue to eke out occasional points from a relatively weak position, and the result is that traditional tactics like ganging up on the leader are still effective without significantly slowing the pace of victory points coming into the game, so keeping it to a manageable length and preventing diplomacy and alliances from dominating the play. In another clever move, players collect these mission cards in secret meaning that a canny gamer who has set up the board to his advantage can quite suddenly cash in a number of cards and come from nowhere to lead or even win the game. This system rewards smart play, aggression and careful planning whilst remaining deliciously exciting and tense. It’s an absolute gem, and I’m surprised it hasn’t been more widely copied elsewhere.

To add to the variety players also get a hand of power-ups called Energise Cards, which have a wide range of different, well-designed effects and which often require skill and foresight to use to maximum effect. In a nice simple mechanism to help keep weaker players from sinking completely, winning a battle nets you victory points but losing one nets you an energise card. But the easiest way to get these cards is simply to control the central space on the board, known as the Monolith, which gives you two each turn. This is a fantastic way of encouraging the players to fight rather than hang back and build up but rather awkwardly, two cards per turn seems to be a bit too powerful while one seems insufficient reward for the effort of defending this important space.

Aside from this slight imbalance, the only other black mark against the game is a certain feeling deja-vu and repetition that creeps in after a few plays, the sense that you’ve seen this before, done it in the past. And this is where the Fantasy Flight reprint comes into its own. It looks like they’ve tweaked a couple of cards here and there but the major difference between this and the previous version is an appendix in the rules containing a quite staggering number of variants for you to try in order to help keep things fresh. Two try to solve the Monolith balance problem, one by awarding a choice of victory points or cards, other by turning the Monolith into a chaotic vortex that sucks units up and spits them out elsewhere, which will be pleasing for those who want more randomness. This is completed by another which posits face-up missions that anyone can fulfil, and will be pleasing for those who want less randomness. There are variant board set-ups, unit powers and exploration rules and more besides. They are, for the most part, well-designed and hugely welcome. 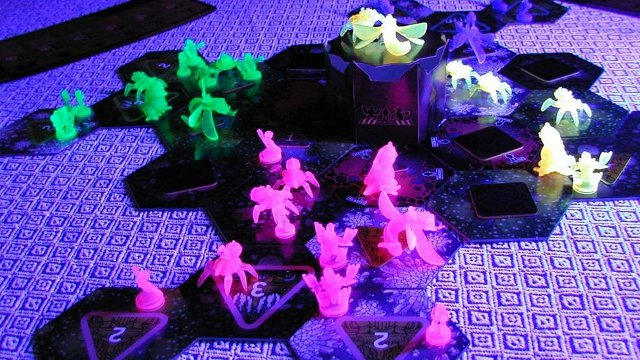 The other thing that Fantasy Flight did to Nexus Ops was to give it a fairly major visual overhaul. The original game had the peculiar innovation of featuring miniatures sculpted out of a transparent plastic that reeked of solvents and glowed under ultraviolet light. I’ve always wondered where on earth the people at Avalon Hill got that idea from, whether they think all board gamers are basement-dwelling troglodytes who would naturally have several UV lamps hanging around in order to enjoy this spectacular effect. In real life I don’t own a UV light, and I’ve never met another game who has ever seen the glow in action, although photographs exist that demonstrate how cool it is. But however pointless the addition might be, its mere presence endeared it to a lot of gamers, who complained that the Fantasy Flight reprint is muddy and ugly. And whilst this observation is entirely correct it seems to miss the fact that unless you play regularly under UV, the original is horribly garish and just as ugly. Which is a long-winded way of saying that I see no earthly reason to prefer the original over this reprint with its gameplay additions and (probably remote) possibility of expansions.

Nexus Ops is a wonderful game, which offers a rare and pleasing balance of strategic choice and escalating skill against randomness, variety and vibrant player interaction all wrapped up in a highly manageable package. It also represents, I think, a watershed moment in game design when suddenly a very large number of much longer, much more complex and much less interesting older games became obsolete because we suddenly saw how easily all the chaff could be stripped away, leaving us focussed on the core joys of planning extreme violence and rolling dice. One thing that length and complexity do bring to the table though is an epic, grandstanding feel and that’s the one thing that Nexus Ops lacks which its predecessors had. Otherwise, you’d be hard pressed to find a better way of fitting a nice slice of science fiction combat into your games evenings than this.