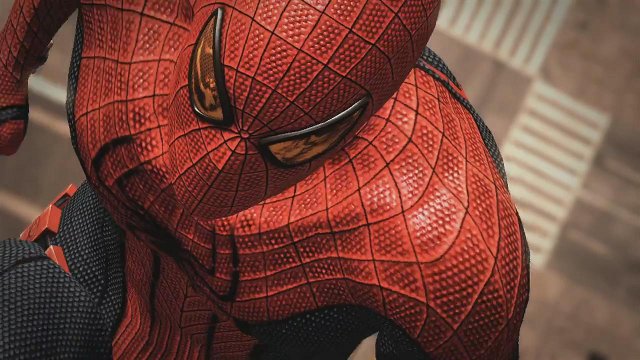 Amazing Spider-Man is as by the numbers a Spider-Man game as you’re liable to find, with one major exception. Go ahead, make a list of what you’d expect a Spider-Man game to have. Web swinging? Check. Acrobatic combat? Check? Shooting dudes with your web shooters? Check. Quips and one liners? Check? Heart? Nope.

And that’s the problem. 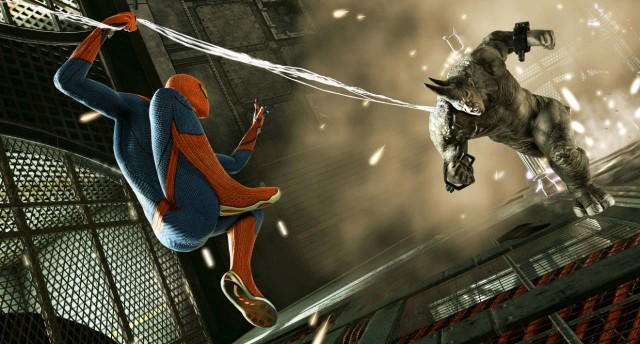 (Spoilers for the game and the movie follow. I’ll do my best to contain them, but the game seriously spoils the movie, so this is just one giant cascading waterfall of spoilers.)

Maybe this is just my childhood talking, a childhood spent as the science loving nerd, bullied at school and desperately hoping for the day where I’d a) get bitten by a radioactive spider, b) have my mutant powers manifest, or c) find the tree branch that was secretly doubling as Mjolnir, but Spider-Man is the superhero that I most associate with heart. Peter Parker is a shlub. He can never get a break. He struggles to make ends meet, he tries to do right by his girlfriend, he tries to keep his aunt safe and provided for, and oh yeah, he risks his life on a daily basis for a city that, at any given moment, has been turned against him by one ginned up controversy or another. Despite all of this, he still puts on the suit and still risks his life. Sure, his uncle’s death taught him an important lesson, but him continuing to be Spider-Man comes from more than that. It comes from heart, from loving his city and the people in it and not wanting them to see them come to any harm. I mean, by any objective benchmark, New York City is the most superhero rich town on the planet, home to the Avengers, the Fantastic Four and Daredevil, just to name a few. If Spider-Man wanted to take a break, it’s not like the city would be wanting for a protector. But still he persists, fighting the good fight.

Spider-Man’s heart is so important to his character that when it’s not present, you feel it, which is my biggest problem with Amazing Spider-Man. It doesn’t help that the game is a movie tie-in game that takes place directly after the movie, yet was released a week before the film. As a result, Spidey’s relationship with Gwen and the Lizard aren’t well developed because they assume you’ve seen the movie, a temporal impossibility unless you also happen to be a movie critic. I’m supposed to want to save Gwen because she’s his girlfriend, not because I feel anything for the character because I’ve seen the relationship develop, or because Spidey has shown me why he loves Gwen. He loves Gwen because the script says she’s his girlfriend. Similarly he trusts Dr. Connors not because of anything we’ve seen, but because the script says that he should. I don’t need a game to explain every last emotional beat to me, however it wouldn’t hurt to develop these relationships a little instead of just dumping me into an apartment in Manhattan and saying, “You love her, you trust him, get to it.” 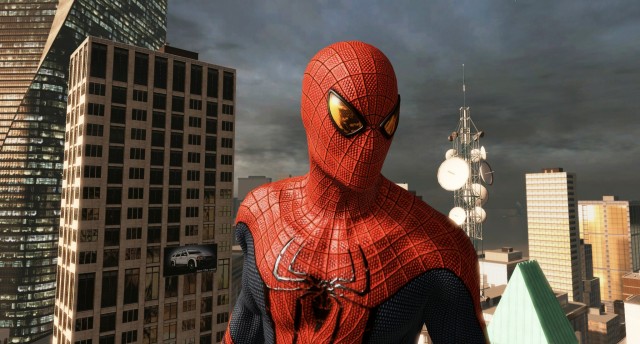 The last Beenox Spider-Man game, Edge of Time, was terrible, in large part due to Spidey spending most of his time webslinging inside a building. For this game, Beenox gave Spider-Man a large-ish open world playground of skysrapers, parks and office buildings from which to swing. Hold down the trigger and you make large, looping arc. Tap it and Spidey will do smaller swings. Hit right bumper and you go into Web Rush mode, a slow-time mode in which various perch points are highlighted should you want to automatically web swing over to them. Enemies ripe for punching and comic book pages ripe for swiping are similarly highlighted by the mechanic. If there aren’t any tall buildings around, Spidey swings low to the ground, if there’s a lofty point for his webbing to attach to, he’ll swing into the clouds. At first, it’s awesome, but it doesn’t take long to realize that there’s no skill involved in the system. You point Spidey towards the latest petty crime or photography target or Bruce Campbell piloted zeppelin and you just hold down the trigger. Spider-Man does whatever a spider can and soon you’re there. Yeah he makes the requisite “Woohoo!” and “Oh yeah!” noises, as if to make you feel like you should be excited, but it doesn’t work. When you managed to hit those boost grapple points in Batman and successfully glide over half of Arkham City in one boost, swooping and diving to gain speed, it felt earned. Here, it feels like running, just at a higher elevation.

I mention Arkham City because Beenox played the hell out of that game and took a whole bunch from it. Combat has you hitting X to strike and then countering with Y whenever Spidey’s spider sense lights up. Get your counter high enough and you can do a special move that immobilizes an enemy. The higher your combo count and the more special moves you use, the more experience you get towards leveling up Spidey’s powers once the fight is through. The problem is that while Arkham City’s combat had a rhythm to it, combat here seems mostly anticipatory. You strike until you’re supposed to counter and then you do a special move when you can. All of Batman’s special attacks had a tactical use to them, as you would expect from a Batman game and knowing when to use them was as important as being able to react to the fact that someone was about to hit you from behind. Maybe I haven’t unlocked enough of Spidey’s move sets, but right now the combat in Spider-Man feels like it has the mechanics of Arkham City’s combat but none of the thinking behind the mechanics.

In a further homage to Arkham Asylum and Arkham City, Spidey’s duds get slashed up the more damage you take. Bruce Wayne will be comforted to learn that I’m not playing favorites when it comes to shredding the wardrobe of my favorite heroes. I am as hard on Spidey’s wardrobe as I was on Batman’s. 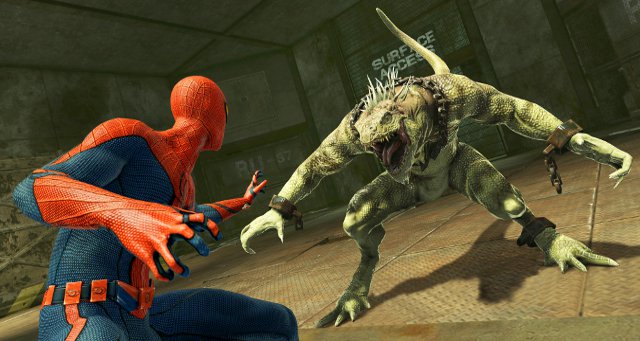 Despite the open world trappings, most story missions are spent inside but they don’t feel as corridor-like or as hemmed in as Edge of Time’s jaunts through futuristic office buildings. Many the open room are available, stocked with Oscorp guards or infected NYC residents or killer robots. Once again, Arkham City’s influence is felt as enemies can be taken out with straight up brawling, stealth, or a mixture of both. Web rush to the ceiling, look down and if a thug is in your purple web thingy, you can perform a stealth attack. At first, your prey will be webbed up on the ground, most likely informing everyone in the room to your presence but through upgrades you can stick enemies to the ceiling, two at once should you have the scratch to pay for it. The system works well and without the need for specific points to perch on, a la Batman, it can be almost too efficient. I have cleared out entire rooms of enemies with nothing but stealth attacks and quickly zipping around the room to hide from my victims’ flashlights. As I’m playing on Super Hero difficulty, I certainly appreciate the option to take guys out one at a time, but the game lacks the puzzle-esque level design and associated gadgetryof Arkham City, a game that rarely allowed you to take every single enemy out with nothing but stealthy drop attacks. As a result, the stealth aspect is a one trick pony. It just so happens that it’s an extremely effective trick.

When you’re not in the sewers looking for Vermin, or in the Oscorp labs fighting Scorpion, you have all of Manhattan as your playground with plenty of muggings, car pursuits, races and photography assignments to keep yourself occupied. As with the webswinging, none of these provide a challenge, at least not so far, which makes them feel like nothing but busywork. In fact, at one point, all you have to do is pick up ten different infected patients, one at a time, and swing them over to a hospital outpost. That’s it. There’s no timer, no enemies, nothing but picking up these people, swinging them to get medical attention and hoping they don’t barf on the tights. I understand that it’s to show that people are being infected, but where’s the challenge there?  What about that screams “Spider-Man” other than being able to webswing to the hospital rather than drive. Similarly, all of the muggings and police blockades are challenge-free and, oddly enough, will never go away for as long as you want to tool around NYC looking for the 700 comic book pages flitting about. Yes, that’s right, 700 pages. Good luck with that. I understand that open world games need to give the player something to do when they’re not in a main mission, but come on. After an hour, a mugging shouldn’t still be ongoing. Those are some damn incompetent muggers. 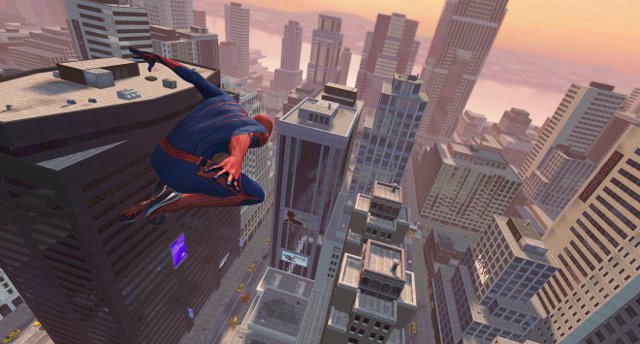 It all feels so mechanical. I go and stop the muggers because they’re spots on my map and I’m a good, little map cleaner. I take photographs at crime scenes because the annoying lady won’t stop emailing me about it. I do races and xTreme events because there’s an achievement. I help Gwen because the game tells me to. I don’t feel attached to any of these people, I certainly don’t care about any of them and if my Xbox were to die tonight I’d feel bad that I didn’t get all the points in the game, but that’s about it. Like I said, no heart.

And so I keep on swinging, keep on rescuing people, keep on fighting scorpion and Rhino and whatever other weird, half man, half beast enemy they want to throw my way, when they’re not having me fight giant robots. It’s summer, and the points are easy, so what else do I have to do? That basically is Amazing Spider-Man in a nutshell, it’s a game you play when you have nothing better to do, effectively turning Spider-Man from a hero that’s all about heart to one that’s all about convenience.