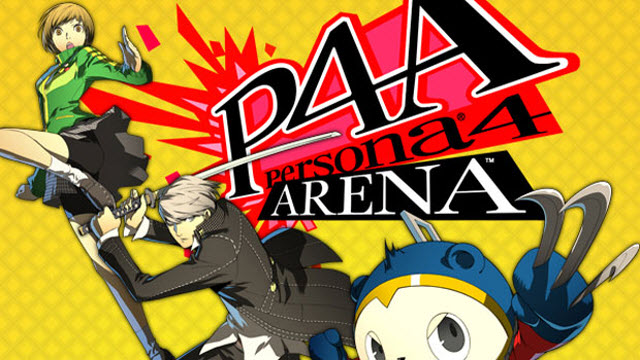 If you’re one of these oh-so-with-it 8-bit indie hipsters that think that the Japanese game industry is over, odds are that the notion of fine purveyors of “soulless” Japanese fare such as Atlus and Arc System Works teaming up to produce a fighting game based on a venerated JRPG series will make you turn up your nose. But if you like colorful, stylish, exciting, and purely fun to play video games then I’m happy to report that Persona 4 Arena is those things and it’s imminently accessible to dabblers in either genre as well as those who don’t know a Zio from a Bufu. It’s as hardcore a fighting game as any out there, but it’s as pick-up-and-play as they come. The depth is there, the range of playstyles is there, and the balance is there. This is a top shelf fighter, and it’s one that I think will have a following for years to come in both casual and competitive circles.

Building from their experience developing the Guilty Gear and Blazblue games, which have to my mind always been on par with the best that Capcom or Namco has to offer, Persona 4 Arena continues the tradition of spectacular anime-style sprite-based fighting with outrageous animations and mind-blowing special attacks. It looks awesome, and the graphic design of the menu screens and interstitials scorches with a hot pink and yellow palette struck with sharp angles, TV static, and hilariously hyperbolic slogans. Melodramatic, over-the-top, and stunning. It looks and moves every bit as beautifully as Capcom’s recent titles, if not more so.

The game most closely resembles Marvel vs. Capcom 3 both in its accessibility as well as its ridiculousness. It’s fast, frantic, and summoning your character’s Persona into battle is similar to the team-up attacks from that popular series. Controls are likewise simpler, favoring easy quarter circles and shorter button combinations to keep the coolest and most effective attacks close at hand. Each of the 12 characters is completely different, there’s no Ryu/Ken analogs among them. As in Blazblue, it’s definitely a quality over quantity impetus in terms of the character selection. Players of Persona 4 will be familiar with the cast. I haven’t played it yet because I’m waiting on the Vita edition, but there’s a couple of faces from Persona 3 that I was pleased to see. Each character brings with them their titular Persona and a range of special attacks and combinations. Personas can also be destroyed during the fight and their ability is limited by a power gauge. 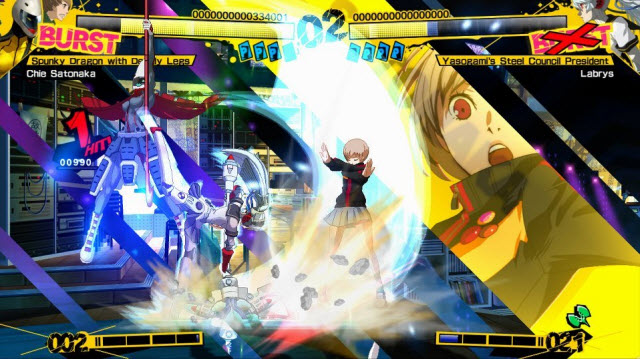 The mechanics aren’t as complicated as Guilty Gear or Blazblue, and the attendant tutorials are more than adequate to get you up to speed with the particulars of cancelling, evading, bursts, and other unique features. Training and challenge modes are de rigeur in fighting games, they’re available here and appreciated. The story mode is almost obsessively complete compared to other fighting games and it follows directly on from the events of Persona 4, which may or may not make any sense to you.

The problem with the story mode is that it’s told through text boxes that ramble on and on and on, leaving you pressing a button to advance through them and literally waiting 10 or 15 minutes to get to the action. If you’re heavily invested in the characters, then you’ll likely dig the long-winded tales it tells about each of the characters. If you’re impatient like me and do not consider Persona to be one of the Great Works of Modern Literature, the Arcade mode actually sums up everything in the context of a basic ladder sequence. Multiplayer is, of course, available and of course you’re going to die unless you’re a P4A master.

I love fighting games in general and there have been a lot of great ones over the past couple of years. It’s a tough call as to what the best of the lot has been, but the shortlist would include pretty much everything Arc System Works has put out include this game. I’m absolutely loving the roster, the action, and how easy it is to dig in and enjoy the game without feeling like I’ve got to have a fight stick and spend endless hours against a training dummy to feel competitive or even able to beat the AI at a respectable level. I bought this game on launch day and paid full price for it, and I don’t regret it at all- that says a lot given the current climate in the industry and my attitude toward it. If companies like Atlus and Arc keep putting out such “soulless crap” like Persona 4 Arena, then I’m happy to give them my money for it. Now, if they can come up with a Dark Souls fighting game together, I’m all in.