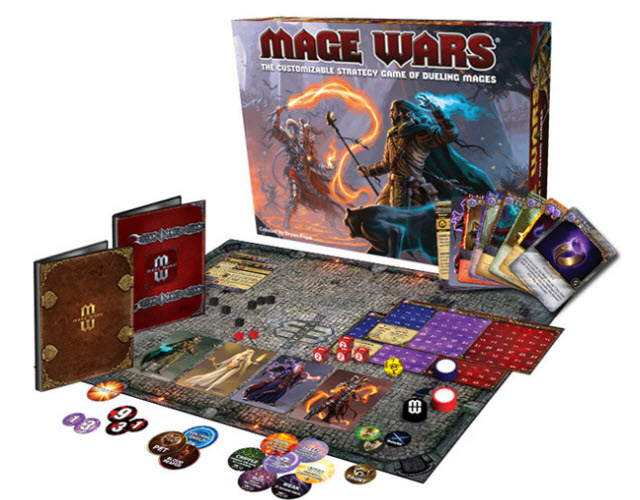 When I first opened the Mage Wars box, I thought I was in for it. The signs were bad. It’s a game from a first time publisher and a first time designer. Worrisomely generic, Magic card-style artwork and terrible fonts didn’t endear me to the product at all. The rulebook was filled to bursting with esoteric keywords, extensive descriptions of multiple turn phases, complicated examples of play, and callout boxes galore explaining exceptions, situations, and subsystem mechanics. It looked like a hot mess, a kitchen sink kind of game. It felt like the kind of game that in the past I’ve found myself regretting that I requested a review copy.

The first session- well, at least the first half- was a slow motion disaster of hesitant cardplay and shot-in-the-dark tactical board play. But before all of that, I had to sort out the 322 spell cards and make two decks for two of the game’s dueling mages, putting all of the cards into these adorable binders that represent the players’ spellbooks. With the prep work done- and a head full of rules and a quarter-remembered glossary of status effects and special abilities- we stumbled. Lots of “can I do this?” and “I don’t think that’s right”. Rulebook consultations precluded by “hang on, let me check”. All of those speedbumps weren’t nearly the chokepoint that flipping through the spellbooks during play was. This is a card game where you get to look at your entire deck- no hoping for a topdeck draw. Hope you remembered what every card does!

But when it all starts to come together and the opacity of words like quickcasting and magebinding fades away, Mage Wars eventually reveals itself as one of the top games of 2012.

Bryan Pope’s first-time design is, in some ways, this year’s Mage Knight- a complex, detailed design that demonstrates the value of tasking the player with putting in the due dilligence to learn and master a game. Like many classic hobby games of eras past, it’s not one to buy and expect to play the same night in an hourlong session. With deckbuilding more or less required and many possible combinations of creatures, conjurations, incantations, and equipment to consider. And that’s before you get into weighing out in-game strategies such as flooding the 4×3 board with cheap creatures or buffing out your mage with powerful magic items to take on all comers.

There’s a lot of material to digest, and it’s not hard to feel a sense of information overload at first glance. But reading through the exceptionally well-written rules and brief walkthrough reveals a game that isn’t nearly as structurally complex as it seems, and any CCG veteran will likely pick right up on the process and flow of the game. Card knowledge is an important factor, and that makes multiple plays essential to get the most out of what this outstanding game has to offer for those willing to put in the time to learn its finer points.

Effectively, Mage Wars is sort of an ur-game that draws on the major forms of hobby gaming from role-playing to board games to CCGs to tabletop miniatures. It’s not dissimilar to Summoner Wars in some regards, but it’s a much deeper, richer game owing to its denser mechanical structure and greater range of tactical and strategic possibilities. I would stop short of calling it a refinement or a culmination of hobby game strains since there is a sort of reckless, slightly unpolished aura about it- something I find actually kind of exciting and compelling. That means it feels new, even if my initial kitchen sink impression wasn’t far off the mark.

The syncretic design is smart, and as with Mage Knight there is a lot of complexity deftly managed by the rule set. One thing I really like is that Mr. Pope very effectively uses restrictions to contain the decision matrix, keeping it from getting out of control. For example, on each turn both players have to select just two cards from their binder. Those will be the only two spells they can cast during their turn, barring special effects such as wands that let you store spells for later use.

On each turn, both mages get to activate every card they’ve summoned to the board, with each getting to either move and take a “quick action” or to make a full attack or cast a full spell. Some creatures, for example, have a weaker quick attack but a stronger full one. And then there are elemental effects, buffs, curses, area-of-effect spells, and tons of other considerations to weigh. One touch that I absolutely love is that enchantments- whether they’re helpful or hurtful- are cast face down on a creature. There’s a second cost to reveal them. So they can be used to bluff or to spring a nasty surprise.

On top of the cardplay, managing mana production and expenditure, mitigating lasting status effects, and coordinating on-board maneuver there’s also dice-based combat. Even the combat is more detailed than it seems at first with its simple hit-or-miss results. The rules also account for armor, guarding actions, counterattacks, and other factors. We’re still going to pull up short from Magic Realm on this trip, but there are definitely more specifics than other recent games like this.

There’s a lot to consider, and that’s kind of the sum of it- this is a content-rich game with much to explore and plenty of avenues for it to develop in future expansions. Mage Wars is a big, burly design that bucks the trend toward smaller and shorter but it offers committed players plenty in trade. I’m very interested in seeing more from these folks and seeing how this game develops as a product line.