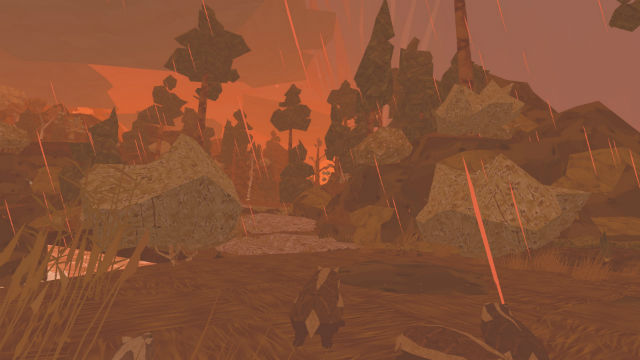 It was the blind cruelty of mathematics that got me in the end.

Shelter is a game which aims unapologetically for your hearstrings. From the outset where you, a badger mother in charge of five cubs, must help a sick cub before you can leave your flooding burrow, it tries to make you fraught with the responsibility of caring for these helpless little bundles of fur.

But I’m a hardened gamer, used to laying waste to battlefields with overwhelming firepower, not babysitting badger cubs, and I approached Shelter in the standard mindset. Two cubs lost when they strayed from my protection and into the dark night, lost forever in the gloaming. Another swept away during a badly-timed crossing of a raging torrent. But they were collateral damage sustained on the way to game end and a nice achievement. Nothing to worry about.

It was on the last level, with two cubs left to feed that realisation dawned. A big part of Shelter is providing food for your cubs: spotting edible roots and grubbing them up, or the surprisingly engrossing process of stalking and hunting frogs and foxes. They get gradually paler as they hunger, a apt visual metaphor for slow starvation, and it’s part of your job to make sure the weakest get their fair share, no simple task in a mass of squeaking, squabbling offspring.

But with just two left, the task become immeasurably easier. Food, which once felt scarce, was now stupidly bountiful. With only two to sort out, feeding the hungrier of them was absurdly simple. And with this came the gut punch of nature’s iron laws: you make your own life easier by sacrificing that of others.

I’m a biologist by education. I learned about this stuff, about ecosystems, food chains, inverse predator-prey relationships. I can watch the most mawkishly fetishised nature documentaries without flinching. But this sudden, simple demonstration of those abstract concepts in action broke through my scientific detachment. I’d failed: I was a bad player and, far worse, a bad parent.

When the slightly confusing, scripted end came, reinforcing the game’s message of cyclical, unfeeling nature, it seemed both fair, and just.

So I started again. It’s a short game, taking maybe 90 minutes from beginning to end. And the art is quite wonderful, a variety of expressionist landscape paintings bought vividly to life on your screen. I was more than happy to see it all over for a second time.

This time I took more care of the cubs. I learned the variable stripe patterns on their backs so I could tell them apart, worked hard to shepherd them in the right directions and to always feed those most in need. I kept them close in the dark, hid with them from eagles in the long grass, bit my lip with worry as they struggled to catch up through foaming rivers and blazing scrub.

It felt a bit repetitive. For all the visual glory in the game, mechanically it’s pretty much all a variation on the theme of timing things right so that your always-following cubs make it through the window of safety you’ve chosen before the dangerous environments close in. Once you understand that, it’s plain sailing.

But the feeling of vindication when I made it through with all of them alive was exhilarating. Two or three runs is probably enough to glean all you can from the game: whether you think that represents good value depends on how much you’ll enjoy subtle emotional manipulation. There’s a day-by-day nurture mode that drip-feeds you sentimentality, but it’s little more than a curious distraction.

If it gets through to you, it pushes some extraordinarily primal parenting buttons in the psyche. If it doesn’t, it’s a short and overly-easy badger simulator. For me, Shelter taught me to care about pixels, and it paid off.