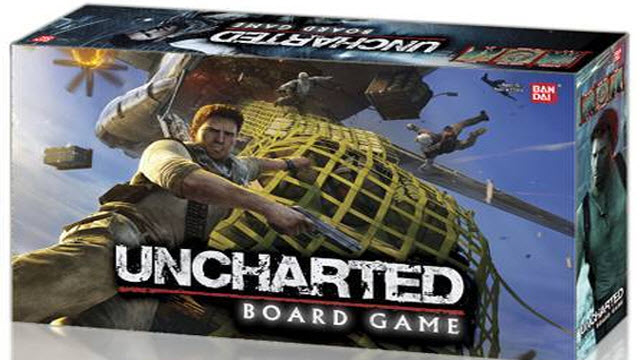 Bandai’s new Uncharted board game, based on the smash hit Playstation franchise, probably isn’t what you’d expect. For one thing, it’s more specifically a card game. For another, it doesn’t suck at all. Getting into the nuts and bolts of it, the surprising thing is that it’s a very accomplished, studied design that makes up for a lack of originality or progressive concepts with a smart sense of syncretism, taking diverse mechanics and melding them together while maintaining an impetus for streamlining. This is a game that needs to be accessible, playable, and fun. It is those things, and designer Hayato Kisaragi has delivered more than I expected out it.

The question on the minds of Uncharted fans is if it “feels” like you’re Nathan Drake or Elena Fisher, jumping from golden ledge to golden ledge while engaging in banter between the cover-based shooting and ersatz Indiana Jones trappings. The short answer is that no, it doesn’t “feel” like that at all and it’s a very high level take on a very high level interpretation of the games’ setting, characters, and events. The upshot of this is that the game is good enough that it didn’t really need to be Uncharted to succeed, so if you’re a fan of Naughty Dog’s treasure hunting saga, consider it a bonus that you get to play as the whole gang- even Tenzin.

Essentially, this game drinks deeply from the deckbuilding well in the Ascension mold, with a revolving display of adventure cards available for acquisition. But it’s definitely not a deckbuilder. Instead of assembling a deck you’re assembling a tableau of action cards drawn from a separate, rather large deck. These action cards determine what you can do in the game and are something like Magic permanents- once you’ve paid for them by discarding other hand cards equal to cost, they’re part of your action “menu” and are tapped (sorry, “rested”) when used until the next round. You get to do two things per turn, which includes playing cards and using them.

A payed-for and played card may let you rest it to draw a card, place a search marker on one of six displayed treasure cards, or to add to attack points if you’re trying to shoot a bad guy card or another player in the deathmatch mode. If you don’t like your cards, they can be discarded for a stock effect- green ones give you two extra actions, blue gives you two health points, and yellow lets you place a search marker. Red cards are weapons, and some weapons like the fabled Pistole let you dump red cards to increase damage.

The search markers are where the game veers simultaneously into worker placement and area control mechanics. Some treasures have an effect that extends to anyone with search markers on it. Once a required number of search markers are placed on a treasure, it’s discovered and the player with the most tokens gets the victory point value and all players there get any other effects that occur. It works really well, and it creates some serious competition- and the need for long-term strategy and smart use of your cards.

This is a tightly wound game. Actions are very limited, and if you don’t budget your cards right, you can wind up screwing yourself out of being able to take a useful action- or you might miss the cash-out on a treasure. Further, at the end of the round any enemy cards in the adventure display that weren’t killed shoot every player, and you can rest cards to absorb damage. Oh, and when played with the normal rules this is an elimination game. If you die, you’re out. This can lead to some great high-stakes, win or die situations. 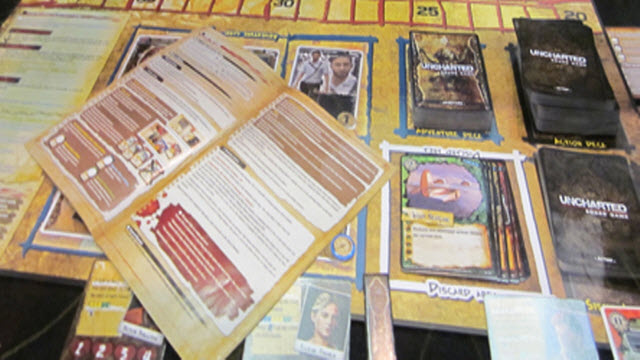 It’s a two to four player game, although I don’t think you really want to go less than three. Like most area control games, it doesn’t feel quite right with a pair. There is a decent solo game included, and in addition to the standard competitive mode where the players are shooting at and being shot by the bad guy cards there is also a delightfully nasty deathmatch mode with tons of treasure-stealing and there’s an obligatory co-op horde mode. Expect to spend about fifteen minutes per player with the game regardless of how you play it- it moves quick, has a nice arc with escalating difficulty, and a neat sense of development.

The characters have the expected special abilities. But here’s the neat thing. They don’t necessarily start with them, and they don’t really level up to them. Instead, you gain them by acquiring combinations of cards in your tableau or by certain game situations. For example, when Sully drops below seven health, he gets to put a free search marker out at the beginning of every turn. Tenzin gets stronger and stronger over the course of the game as he takes damage.  It’s an interesting- and subtle- way to introduce some narrative and sense of progress without introducing mechanics.

I’m surprised that I wound up liking Uncharted as much as I did, and to be honest I half-expected this to be a negative review. It’s an inexpensive, fun game with a cool- if not completely enveloping- mainstream setting. The irony is that you could easily retheme this entire game by replacing the art with characters and objects from the Indiana Jones films, and it’d still be the same good game.