Releasing a new sports game every year isn’t easy. The large publishers jump through hoops to get gamers to pay attention to their annual releases, trying to lasso them into buying yet another $60 upgrade to a game that they bought a year ago. At the very least those publishers can tout fancier graphics and smoother animations. Yeah it’s the same game but check out those grass textures!

What about text sims?

You can make the argument that hyping a yearly release of a game that is at its heart a glorified spreadsheet with an interface is an even tougher challenge. Yet games like Out of the Park Baseball (OOTP) continue to do just that.

With OOTP 13, Out of the Park Developments had some work to do. I’ve played every version of this game since OOTP 4, dutifully upgrading every year and porting my solo and my online league over to the latest version. Last year, my long running online league ported our OOTP 11 game into version 12 and was immediately met with problems, bugs, frustrations, and more importantly, I was left with a league filled with owners who were none too thrilled with dropping another $30 or $40 bucks on an upgrade that simply wasn’t worth it and even though I spend nearly every day using the OOTP 12 software, it wasn’t the upgrade I had hoped to receive.

Thankfully, OOTP 13 is that upgrade. While by no means perfect, this is far and away the best OOTP release since OOTP 6. Of course it’s still effectively the same game – it’s hardcore text based baseball with all of the nuts and bolts that entails, but the interface‘s improvements are immediately noticeable not only from a speed standpoint but from a navigation one as well.

There is a mountain of data in OOTP and allowing users to effectively sift through it takes great care when developing the interface. I had grown so accustomed to the OOTP 11 and 12 interface that I was blind to the fact that the UI simply wasn’t very good. OOTP 13 changes all of that. It looks better, is cleaner and easier to find what you need and is remarkably faster. Some are just tweaks – like being able to sort the draft or free agent pools by “all outfielders” or “all relief pitchers” rather than having closers and middle men on separate pages. Others are more significant like the brilliant Team Home Screen which is littered with important and interesting bits of info about your club. There was a home screen in OOTP 12 but it was a mess of data. 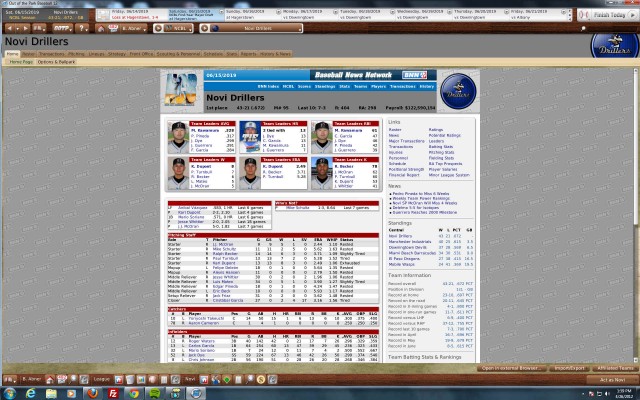 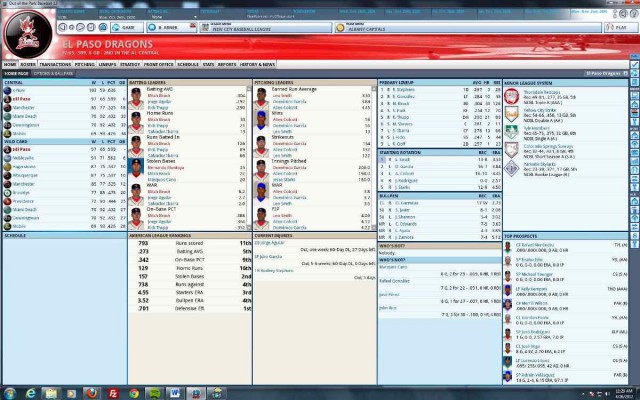 The minor league arrows are back (finally) that shows GMs at a glance who is ready to move up or down in a minor league system without the hassle of looking at a separate screen. Even the individual player screen is cleaner with more info packed on one page – the fewer clicks you force on users in a game like this the better.

One new feature that I didn’t expect to enjoy but now can’t live without in my solo league is the real time simulation engine. Basically it allows you to do your usual stuff – check standings, browse lineups, look at stats or whatever while the game is running in the background and you’ll see scores change in real time along the top of the screen. You can speed up this process or slow it down to literal real time but seeing your league play out in this manner is terribly immersive. This is particularly true late in the year when you need a specific team to lose a game. In the past you’d simply sim the games and see the final score. Here it creates drama to the pennant chase. (Hopefully this can be tweaked to work with online leagues…)

There’s also some general clean up that is appreciated – the game now handles the Rule V draft properly and players who were drafted and cut are returned to their team of origin. Player creation is better and you’ll see fewer fast players with home run power who somehow lack the ability to hit a double. You’ll also see fewer players who hit for high average and power but strikeout 200 times a year.

The CPU AI remains hit and miss and you’ll notice some seemingly bizarre moves both in game and during the off season with contracts – even though the trade AI is significantly better this year. Also improved is the in-game engine as more players score from 1st base on a double and things are not as station-to-station on the base paths. Still, further CPU GM AI is needed in certain areas and I’m still no fan of some of the in-game play by play text, although that is admittedly a minor quibble.

Still, with the inclusion of real life rookies randomly showing up in a league (a feature I love for my fictional solo league), a stat engine that is markedly improved, and an interface that is far less intimidating, for solo OOTP players this is an easy sell. It’s the best the series has been in years and you’d be crazy not to upgrade if you’re still playing an older version.
Let me put it this way: My solo league uses version 13 and my online league still uses 12 and every time I go back into version 12 to do online league stuff I can’t wait to exit and get back to the new game. It’s that much of a difference.

Granted, this review is mostly dealing with solo league play. Our online league is waiting to move to version 13 after we finish our current season and I’ll talk more about online play at that time. But for solo play? Even though they are different games, I’d rather play OOTP 13 than MLB: The Show or MLB2Kx to get my baseball fix – and it’s not really close.

And for that reason I’m giving OOTP 13 the very first ever No High Scores High Score Award.