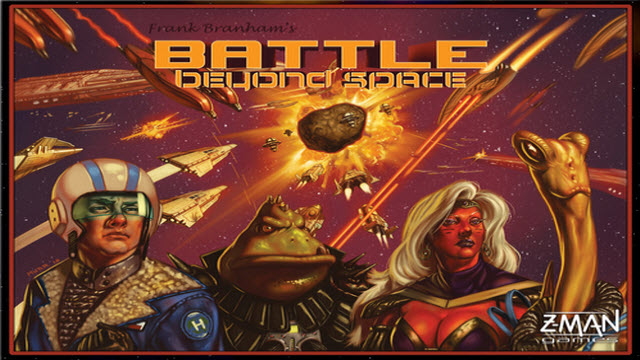 Some six or seven years ago, my good friend (and Christ look-a-like) Frank Branham showed me a prototype for a board game that he designed called Battle Beyond Space. It was inspired by The Last Starfighter and Starcrash, and it had bits salvaged from the old TSR Buck Rogers game as well as lava rock asteroids. The game was awesome, a fun space shoot ’em up with a cool squadron movement mechanic and plenty of total mayhem. We’ve played it off and on over the years, and now it’s finally been released to the general public by none other than Z-Man Games. I tell ya, that Zev Shlasinger is a man of impeccable taste. Looks like the discounters are selling it for about $32.

It’s a great beer-and-pretzels style dogfight game and the production looks outstanding- the illustrations are right on the money in terms of capturing the tone and atmosphere of it. Also, my name is in the thanks section…printed in Comic Sans. It’s the only Comic Sans in the whole game. I really should demand a complementary copy as reparations.

Anyway, I am totally shilling for this game and for my pal. Don’t be like old Bill Abner, who failed to buy a copy at Gen Con. Right after meeting Frank. How rude!