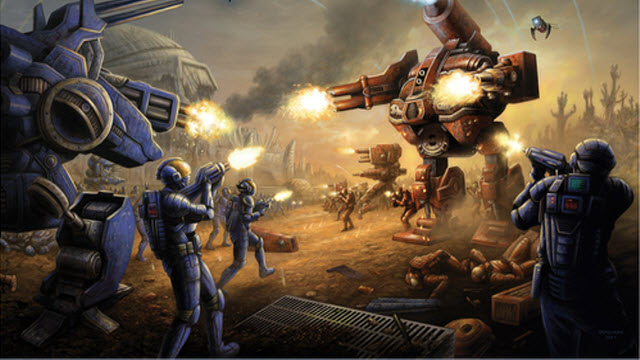 Abaddon is the new game from Richard Borg, a designer best known for his semi-mainstream work in the 1990s (Mutant Chronicles: Siege of the Citadel, X-Men Alert) and his ultra-light wargames in the 2000s (Battle Cry, Memoir ’44, and the rest of the Commands and Colors lineage). It’s also the latest issue from Toy Vault, who didn’t exactly set the world ablaze with the misfire that was last year’s licensed Godzilla game. It’s also a game that’s on the vanguard of the current resurgence of interest in Battletech-inspired mech games, a staple genre that has lain rather fallow over the past decade.

Digression. As a games reviewer, there’s often a moment when you’ve received a review copy from a graciously willing publisher or designer and you’re afraid- if you’re an honest reviewer- that you’re going to have to repay their kindness with a critical thrashing. It happens. It isn’t pleasant, it doesn’t make you feel good about your role as an opinion writer. When I opened up Abaddon for the first time, I was afraid that it was heading in that direction.

I didn’t like that there were only four unit types- three mech (sorry, “Link”) classes and infantry- with the only differences between them being movement, hit points, and which die they throw in combat. I didn’t like that the setting was incredibly bland. It seemed like a missed opportunity that the three different terrain types had no game effect other than to block line of sight. I thought that laying the combat cards on the board pointing at the target was a pretty lazy and poorly implemented way to manage the sometimes simultaneous fire/counterfire battle system. And I hated removing these little “power crystal” counters from the bases of the Links to note their damage.

But while I was running through most of the included scenarios- which I was also initially disappointed with since they don’t feature dynamic, compelling objectives other than kill the other guy- Abaddon started to reveal its agenda and design goals to me. Not in a way that deeper, richer games with intricate strategy and complex mechanics often do. But in a way that made me remember the games where I first encountered Mr. Borg’s design sense in the 1990s. In a sense Abaddon is an old fashioned game, the kind of accessible, entry-level hobby game that doesn’t worry so much about impressing internet forumistas into clucking about how clever the mechanics are as it is does about just being fun.

Abaddon is in a class of games like Star Wars: Epic Duels and Heroscape, although it lacks the strength of setting, concept, and implementation of those titles. It’s a fun-first design that focuses on basic mechanics of movement, line of sight, cardplay, and dice rolling to describe lumbering giant robots, on fire and blazing away with anti-missile missiles. It’s basic and uncluttered to the point where many modern gamers might find themselves wishing for more detail or complexity. Truth be told, it could probably support some advanced rules but I like that it focuses so intently on the prime directives of moving, shooting, and occasional awesomeness.

Setups are provided for two to four players, but it’s really a two player game. One key advantage this game has over Mr. Borg’s previous light wargames is that it doesn’t take a long time to set up. Once your Links and their infantry support are fielded on the grid-based map and the cardboard terrain stand-ups are in place, first player rolls dice that are color-coded to activate specific unit types and also with faces for “Command” (wild, draw a Weapons System card, or drop a Doomsday Bolt on an enemy unit) and for drawing more Weapons System cards. When a unit is ordered, it can move and shoot at something five spaces away in strictly eight-directional line of sight. Positioning and coordination are critical. Complain all you want about the random activation, there is strategy here and it matters. 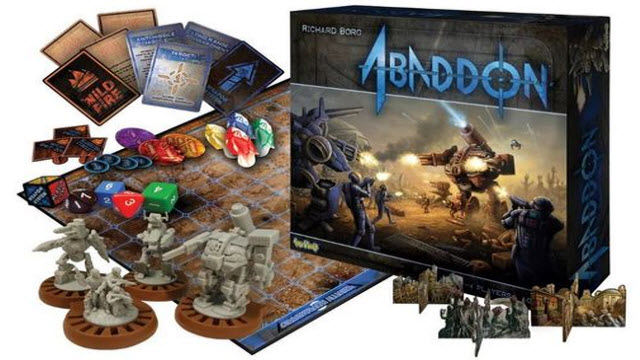 Ranged combat is performed by playing a Weapons System card, which gives a number and sometimes a special damage bonus based on unit type. The unit being targeted can respond with a Weapons System card, effectively counterattacking, or just let the shields try to soak the damage. Dice are rolled on both sides and added to the card values with the highest value winning. Double the loser’s total and you hit twice. If either player rolls a one, it overrides the sum to score a critical hit and the recipient also gets to draw a Wild Fire card, which can incur status changes like requiring additional dice to activate, special damage, or blowing your Link all the way back to your baseline in a gravity distortion.

Close combat is similar, but there are some strategic considerations. Units in close combat can’t counterfire, so tying up your opponent’s heavy Links with Recon units or infantry is effective. And infantry get to roll two dice and pick the better in close combat. Add in some indirect, artillery fire Weapons systems and the result is a quite robust and complete combat system that’s simple and effective. Yeah, it’s hugely luck-based. But this is also the kind of game that really should have pictures of kids playing it and cheering on the back of the box.

It’s easy to expect too much out of Abaddon given its genre and Mr. Borg’s reputation. I did this myself before I really dug into it. Once I sloughed off not only what I wanted the game to be when I first heard friend-of-a-friend rumors that he was doing a mech game but also the assumptions of what makes a modern game good or great, I realized that I was happy just having fun playing this outstanding, imminently approachable game. And really, is there any other reason that we should be playing games other than to have fun?

Now, where did I put that No High Scores High Score award? Oh, there it is.

A PC turn based game in the BattleTech universe with custom mechs fighting it out on a 3d battlefield? Woo hoo. That’s the good news. The bad news? This is another Free to Play game with no single player campaign in sight with a ‘collectible’ feature. Those buzz words send off alarms in my head.

Sure does look neat, though.

Here’s a blurb from a recent interview:

Though they weren’t ready to talk prices, Williams and Cleroux stated that mech’s weapons and customizations will be distributed via booster packs, which can be bought with in-game currency or real-world cash. Items will come in common, uncommon, rare, and ultrarare varieties, just like Magic the Gathering. We were a bit confused when we were told that there wouldn’t be any item trading at launch, though Cleroux did hint at an auction house system to be implemented later down the line. We would’ve liked to see these kinds of systems implemented at launch – nobody wants to buy dozens of boosters in the hopes of getting the one item that they need.