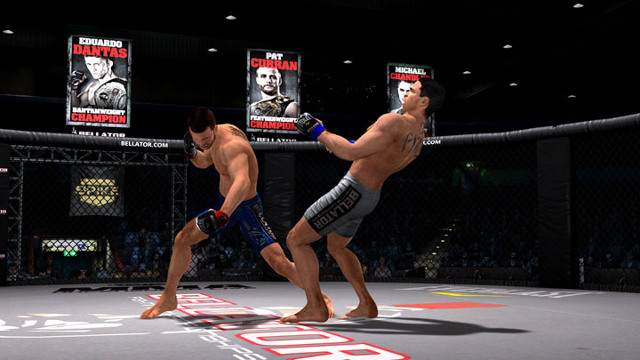 I like fighting games, but I’m terrible at them and the more technical they are, the more terrible I am. I can handle basic things, enough to get started, but once you start talking about canceling out of hyper-combos or picking characters based on how well they can pull off moves in between frames of animation, I’m out. I can certainly appreciate the technical skill needed to master such games, but that doesn’t mean I want said mastery for myself. Hell, even if I did, I’m not sure it’s even possible.

While at E3 I spent half an hour talking to 345 games, the game making arm of Viacom and developers behind Bellator: MMA Onslaught. They also appreciate the technical mastery needed to pull off a deep, fighting game, but they’re also happy giving you a Brazilian Jiu-Jitsu master with purple chest hair and within five minutes letting you whup up on your friends. 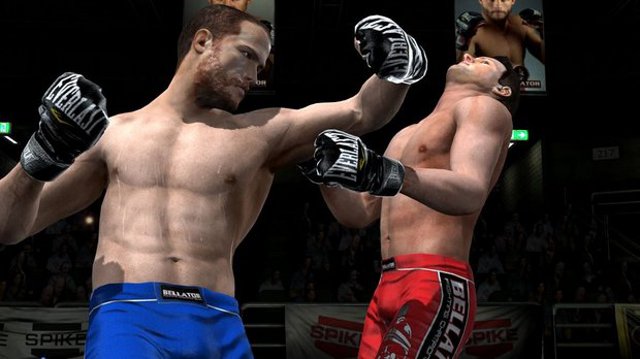 Bellator Fighting Championship’s hook, aside from letting you watch men beat the snot out of each other, is that shots at the title are earned, not given. Tournaments are held across eight different weight classes and the only rule for moving forward is that you have to win. Each “season” starts with eight fighters per class, with the entrants winnowed down across the tournament rounds until one fighter is crowned champion for their weight class. Since debuting in 2009 the league has steadily gained broadcasting partners, growing from the initial broadcasts on ESPN Deportes to MTV2 and soon, Spike TV.

In making the companion fighting game, 345 has chosen accessibility and ease of use over overly technical fighting system. That’s not to say that you can wade into Onslaught and claim your prize, but the focus is definitely on making it easy to create stable of different fighters and getting you headed down the road to Broken Noseville. Character creation allows for four customized fighters per user profile and a generous selection of build, facial appearance and hair options. Fighters can be either featherweight or lightweight class and can specialize in Jiu Jitsu, wrestling or kickboxing. Jiu Jitus fighters have an advantage on the ground, wrestlers excel at throws and kickboxers are good at kicking in your teeth. 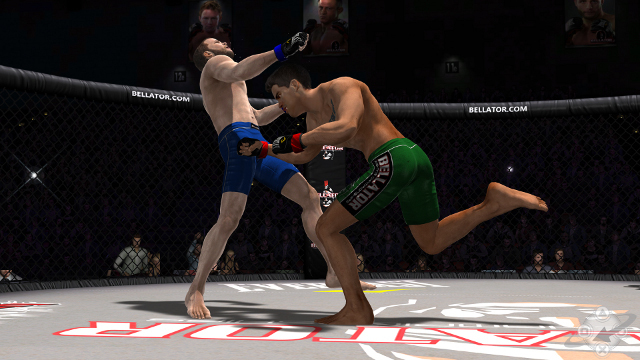 Once in one of the six different arenas, health and stamina are equally important to surviving to fight another day. Health allows you to stay on your feet, but stamina allows you to keep punching. Grabbing a dude, throwing him to the ground and pounding on his head may seem like a savvy strategy, but if you spend all of your stamina, your opponent can easily throw you off of him and then close in for a quick KO. Managing attacking and defending becomes very important, as does mixing up punches to whittle down health and stamina in equal measure.

As this is an arcade fighter, the controls are pretty easy to pick up. There are different buttons for high and low punches as well as high and low kicks. The right thumbstick is used for grabs and throws as well as counter-grabs and for getting the other guy off of you should you get taken to the ground. I spent about 20 minutes watching the developers play while listening to them talk, before picking up the controller myself and within no time I was in the ring and fighting. I even won a time or two, but that may have been more due to developer pity than technical skill. 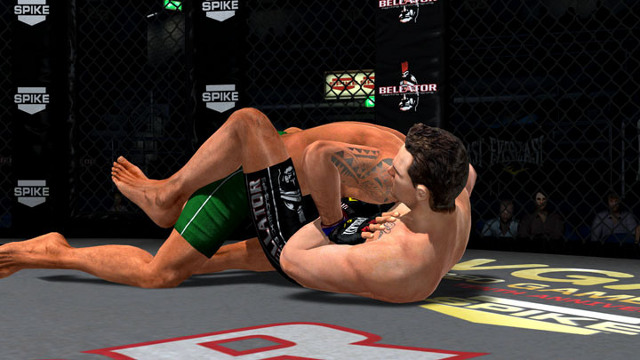 As you win bouts, you earn experience to put towards new moves, but in the interest of balance, no fighter will ever be able to be fully maxed out. As a nice bonus, if you download a trial of the game and make a fighter that you can’t bear to be without, you can keep him when you unlock the main game. Once you’ve spent time honing your craft in the single player, you can go online for ranked matches. Get on the leaderboards and you may see your name displayed during a real life Bellator match. You may want to rethink that K1ttyL0v3r gamertag there, bub.

345 told me that they’re committed to keeping MMA Onslaught up to date with new features based on fan reaction and with the full support of Bellator and Viacom, it looks like they’re in a position to do just that. I got the feeling that they were genuinely interested in making a game that was less of a one time tie-in and more of a companion to the real life league, and a way for fans to connect with the league as times goes on.

Bellator: MMA Onslaught will be available for download on PSN and XBLA on 7/4 for roughly $15. Prepare your gamertag accordingly.