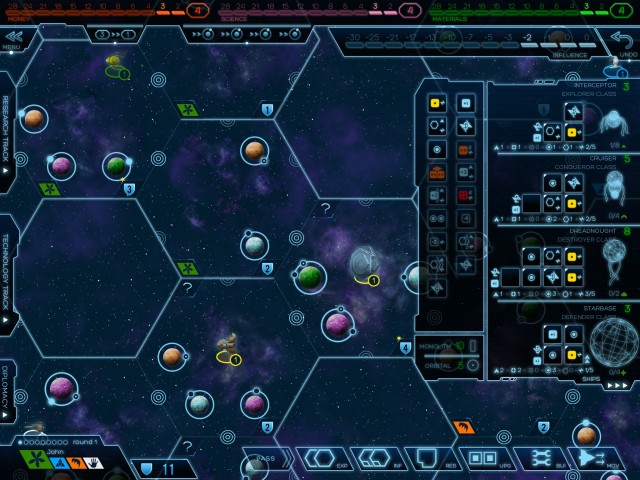 Big Daddy Creations hit IOS board game paydirt a couple of years back with Neuroshima Hex, a title that remains one of the best examples of crossing the table-to-tablet divide. Their long-awaited implementation of Eclipse (a Cracked LCD Game of the Year shortlister back in 2011) has finally arrived and it’s a grand slam. It may, in fact, be the new benchmark of how to do board game apps. It level of polish is AAA-impeccable. The interface brilliantly conveys every piece of information you need at any given time and after a mild breaking in period it makes the rich complexity of the game feel like second nature. It looks great, the AI can be quite ruthless, and although the multiplayer is hampered by Big Daddy Creations going with a proprietary service rather than Game Center, the async is rock solid.

But above all, what makes Eclipse the new standard for board game conversions is, ironically, that it doesn’t seem much like a board game at all on the iPad. It looks, sounds, and plays like a very streamlined, very focused Master of Orion-descended 4x game. There are points at which its board game parentage peeps through- like a wonderful combat resolution screen that shows you the die rolls but not some silly animation of clattering dice- but you could tell someone that this was a totally new design with no cardboard analog and they’d probably believe you.

Unlike Talisman, Eclipse’s more careful, measured pacing and combination of a strong economic game with conflict and exploration make it a great fit for IOS gaming. Thankfully, unlike Ascension, there’s a chat function so you can get in some trash talk before your dreadnaughts unload plasma missiles on your opponents. I’ve had plenty of fun with the single player game against a variety of AI opponents and I’ve never had an easy win out of it. If you’re new to it all, there’s a decent tutorial and the full rulebook. The latter should be absolutely standard on any tablet board game.

For six bucks- less than 10% of what the boxed game costs- you can buy one of the best 4x space strategy games on the market today. You might ask “why don’t I just play Starbase Orion, Sins of Solar Empire, Galactic Civilizations et. al.” and to that my response would be that aside from a game taking an hour or less to play through first exploration to final victory, none of those games are as concise or as editorial. It’s funny that a board game cuts right down to the heart of the genre, and in an implementation that’s better than some computer-bound examples. It’s a masterstroke of design sense that they just went ahead and made this a full-fledged digital strategy game that is able to compete with its forbears head-on.