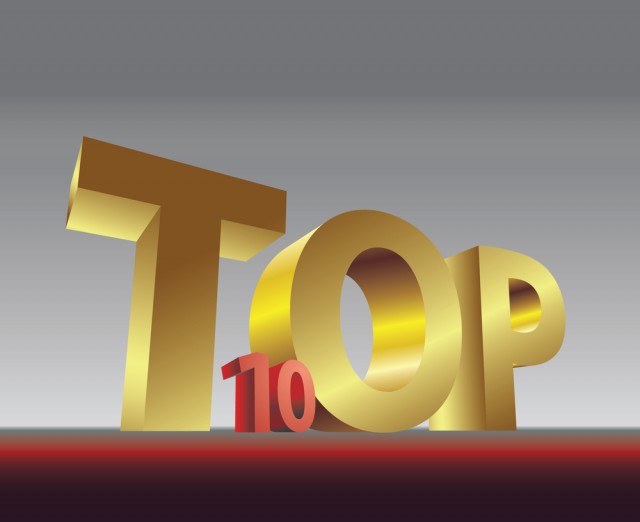 Once again it’s that time where I lay out my picks for the best boardgames of the year. Keep in mind that this isn’t the “best games of 2012” but rather the best games I played over the past year or so. Boardgames, being the beautiful hobby that it is, tend to age better than, say, a 10 year old PC game. I loved High Heat Baseball to death back in the day but I’m not breaking out the Sammy Sosa classic anytime soon.

So here we go: a list of my personal 10 from 2012. My list is certified to be better than anything Barnes posts because everyone knows he likes terrible games.

You can trust me. Also, I won’t add any of our own games on the list because that would be a clear violation of some kind of rule.

Last year’s list can be found here. Looking back I still recommend most of those games even though I think I overrated the Blood Bowl card game and A Few Acres of Snow has run its course.

I was going to put Eclipse in this spot but then I remembered I don’t like Eclipse as much as nearly everyone else, so Catacombs it is. Catacombs is a “dexterity” game — a fairly common genre with games like Crokinole and PitchCar being the staples. In Catacombs you are still flicking disks around but the disks represent baddies in a dungeon or a hero trying to wipe them out. There is a surprising amount of stuff going on in this game and if you like flicking games then Catacombs just plain works. I play this with my family and while not a regular on the table, I do enjoy it even though I am awful at it. Need someone to miss with a point blank magic missile? I’m your guy. It does offer some hilarious moments like when a warrior kills a handful of sekeltons with one awesome flick. 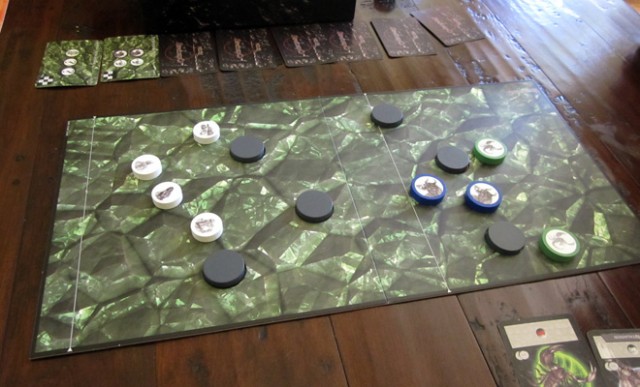 I haven’t played this enough to really make a call on it — but I did play it and immediately afterward wanted to play it again. The search for a great “civ” game that doesn’t take half a day is one of the industry’s white whales and CoC does a pretty damn good job in pulling it off. This is from the same designer as Merchants & Marauders, which is a nice early pedigree. This comes out I think next week — keep an eye on it and if it’s as good as I think it is, it’ll be a regular on the table. 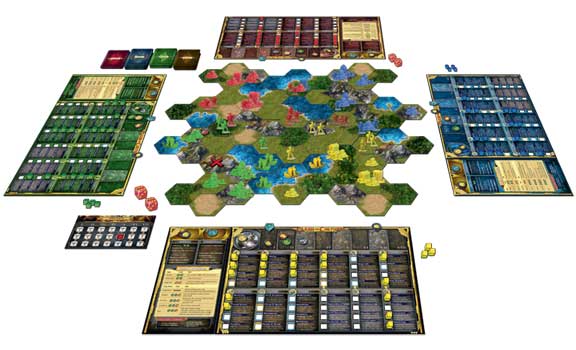 Now out of print and hard to find, Omen is another 2-player card game from John Clowdus, designer of Innovation. It plays in 30 minutes and is full of tough choices as you try to capture cities with ancient soldiers, oracles, and beasts while trying to please the Greek gods. I just love this guy’s work, and the art on this one, unlike Innovation, is top notch.

Mage Knight should be ranked higher. It’s such a wonderfully designed game after you get past its initial “holy shit” learning curve. It tells a compelling story, plays great solo, and is an example of outside the box thinking that has proven successful. Mage Knight has sold a ton if units and for such an obtuse game that is quite remarkable. But I never get to play it anymore. It’s terribly hard to teach and is definitely not for everyone and getting it to the table is tough. But I love the game regardless. 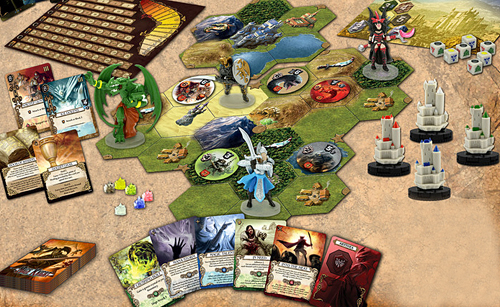 This is basically D&D re-themed with mice, rats, spiders, and centipedes. This story driven game is one of THE best family games I have ever played. Will I break this out with my regular group? I doubt it. But playing it with a 12 year old who likes smacking cockroaches with a sword? Yep. You play “chapters” which are tied together in a storybook which is read aloud during each session. You really are playing a story and not just a “scenario” which gives the game a great sense of cause and effect. You have choices to make during a chapter and it feels like a miniatures game of choose your own adventure. You play this co-op which I usually hate but here it works and if you have kids who love adventure stories I can’t recommend it enough. I hate tying “ages” to games like this but it’s not really a “kid’s game” because you do need some tactical thinking and games do last at least an hour so I wouldn’t being this out with small kids — but maybe 10+? Absolutely.

Do you like Star Wars? The Non-Jar-Jar era Star Wars? Do you like the idea of a fairly simple game of dogfighting between an X-Wing and a TIE Fighter with pre-painted miniatures that look freaking awesome? If there has ever been a game that sells itself, this is it. The only drawback is the price. You really do need to buy more than what comes in the base game to see this reach its full potential but I defy a Star Wars fan to play this and not immediately want to play it again. You will also undoubtedly hear movie quotes flying during each game.

(the game doesn’t come with that cool Death Star map, that’s a custom job, but how awesome is that?)

One of my favorite lite-wargames of all time, if not my #1 favorite. I love this game. How many games of this ilk can you literally teach in 10 minutes and yet find so much depth in its actual gameplay? I have watched this played by the publisher at a convention and witnessed moves I never dreamed of trying — it’s such a brilliant game that only falls flat with those not into wargames due to its era.

But if you want to play a deceptively simple game — and I encourage you to try and get the full compliment of 5-players so you have a player playing each of the American Regulars, American Militia, the Redcoats, the Canadian Militia and the Native Americans — then I strongly advise giving this a look. It’s fast, easy to teach, and will have everyone at the table engaged during every single turn. Doesn’t get much better than that. 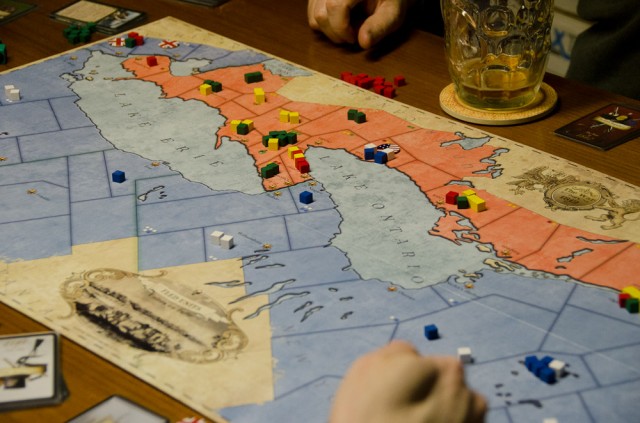 #3. Spartacus: A Game of Blood & Treachery

I have to confess — I have played this one time. One glorious time. The game ended prematurely around 2AM and I was so tired I could barely function but I know this — Spartacus has so much of what I like in boardgames in one crazy package it’s impossible for me to ignore it here. Bribes, open trading, negotiation, backstabs, decapitation…

You play as a prestigious House in Ancient Home and you buy and trade slaves and gladiators and try to become the most influential House. It has die rolling, kick you in the teeth card play — there is literally a card called “Jupiter’s Cock” — yeah it’s an M rated game. It’s unlike anything I have ever played and while it’s not a game for those who despise any level of confrontation or luck in their boardgaming, for the rest of us, this simply HAS to be part of your library. 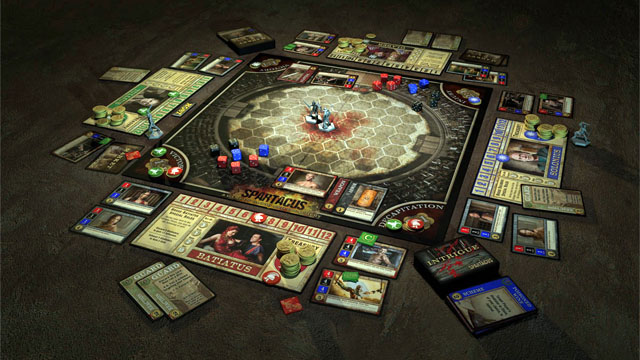 Yeah, it has taken me this long to play this classic. Don’t ask me why but I finally played it quite a bit this past year and it’s as awesome as everyone told me it was. So much as been written about Cosmic that I really can’t say much about it that hasn’t already been said but sitting at a table with my buddies Billy Baroo, Mace, and Kenny during Abner Con earlier this year was one of my gaming highlights of 2012. This is timeless and should be in the library of anyone who plays boardgames. 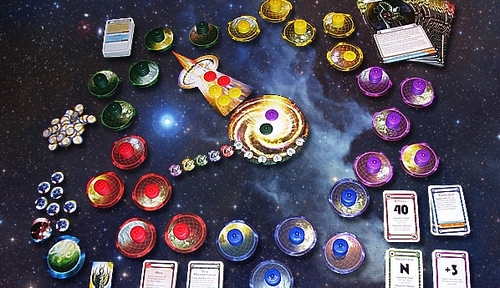 So this year’s list is full of classic “Ameritrash” designs like Cosmic, Spartacus, X-Wing, and the best game I played in 2012 was…a Eurogame about..wait what IS it about?

In fact here’s a quote from a review posted at BGG:

What if you took the most boring looking box art imaginable and combined it with the least inspiring and most sleep provoking board in the history of modern gaming? Tag on a completely listless theme and you have 2-5 players sitting around placing cubes with no regard to what they’re actually supposedly doing. We’re traders? Really? We could just as easily be 5 alien races pushing spaceships around claiming routes to planets. No-one would know the difference. Except the board might have a little more color.

This is how I feel, too. And yet, like this reviewer, I love Hansa Teutonica. It has what I look for in all of my Euro designs — I don’t mind some brain burning and I don’t mind games where people study the board and ponder the best move. I don’t need all of my games to be “rip roaring” like a game of Spartacus. I love all types of games from King of Tokyo and Warriors of God — to games like Hansa Teutonica and this is one of the best Euros I have in my collection. There’s a high degree of “Euro nut punching” which means this is anything but “multiplayer solitaire” which I normally hate in my games. This is a cutthroat design which forces players to stop the plans of the other players — sometimes sacrificing your own goal. Sure the theme is pasted on somewhat and the setting is so incredibly dry..but I have yet to show this to someone who didn’t like it and I’ll never turn down a game, which can’t be said for every game I like in my library 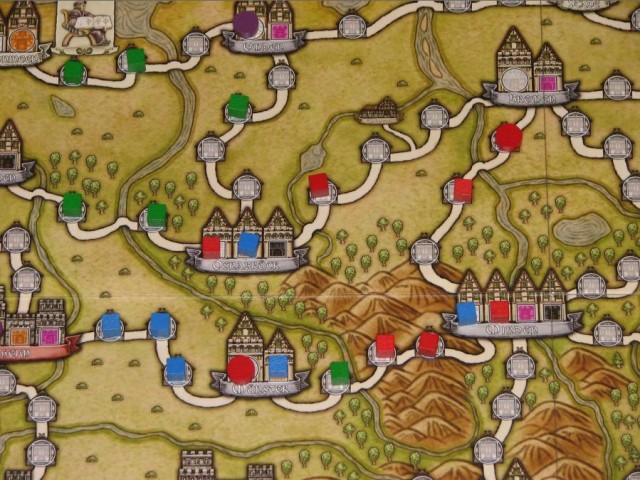 So there you have it, another year with a lot of cardboard and plastic being pushed around a table. Too many games, not enough time.