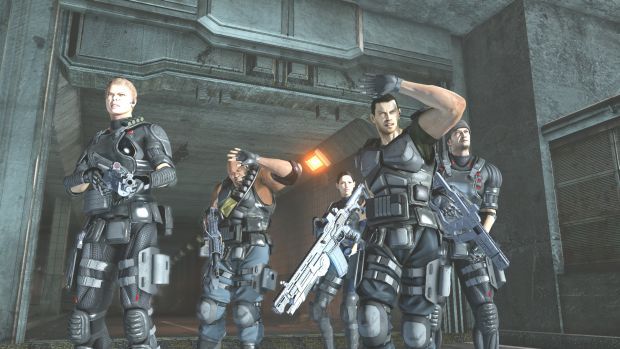 What a weird game, this Binary Domain. I knew very little about it when Sega sent a copy my way last week. I knew it had robots. And guns. And the Yakuza guy had a hand in it. That was about it. I was still crusading across medieval Europe when it showed up so I really wasn’t in the mood for a sci-fi squad based third-person corridor cover shooter, which Binary Domain most certainly qualifies.

But a funny thing happened on the way to Indifference Land. Binary Domain ended up being pretty darn good. Better than average, at the very least. This is a game that has sailed totally under the radar for most, as people gear up for Mass Effect 3 Day. It’s also a game, unlike Mass Effect 3, that reviews sort of matter. Really, how many reviews will you read of ME3? Are you going to base your decision to buy it on a review? You’ve likely pre-ordered it and will be there day one to get that game. Reviews for such games are somewhat pointless – unless the game tanks or is a weird departure (Dragon Age 2…) But Binary Domain? Here’s a game that could really benefit from some press.

The game takes place in 2080; you are part of an elite international “Rust Crew” (special ops type guys) and you fight a shitload of robots. There’s your premise.

With you are a few other comrades: The Chinese sniper chick, the two Brits: an explosive expert guy and a woman who loves to use a shotgun. You have your buddy Big Bo, a heavy weapons expert and along the way you pick up an allied robot that is fairly bad ass. Each of these characters, yourself included have base stats for range, ammo, reload speed, damage, etc. They can also be upgraded via these Nano things that you find or buy at in game stores which upgrade various stats, add health, defense, etc.

You earn cash by killing robots – and you earn more by targeting body parts. Not sure why— just go with it. 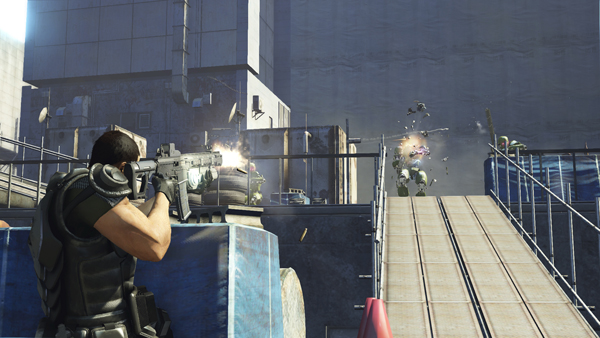 During the game when your team splits up (which they do a lot) you pick two of your crew to go with you and you can issue orders to them via the pad or…if you have Kinect…you can talk to them.

This confirms just how much I despise the Kinect for anything that doesn’t involve my 11 year old daughter showing her dance moves or playing with her fake pet tiger. The voice recognition is hilariously awful. You’ll issue orders like, “Hold!” or “Regroup!” or “Charge!” The problem is that the noise reduction is awful so even when you’re walking around without any bad guys near you may issue an order. You may inadvertently issue the wrong order. It’s a mess. There’s also this weird dialogue system in the game. Yes, Binary Domain wants to be more than it is – these dialogue options are also comically bad. And depending on how you answer these crazy questions your relationship with team members improves or they start to hate you.

Example: British Shotgun Chick: “I think the slums are bad for people. What do you think?”

That’s gold. Makes NO sense at all but really who cares?

The problem is during a fight when Kinect doesn’t hear you correctly and you tell your teammates to hold when you want them to charge. Whoops. I just ended up unplugging that damn thing. Stupid Kinect. Not only does it not work but I feel so damn silly yelling “Fire!” and “Regroup!” sitting on my couch My dog looks up from his nap…wishing we hadn’t saved him from the shelter.

There are two things that you know about Binary Domain. All of that stuff doesn’t matter. Here’s what you need to know:

1: The cut scene dialogue is actually quite good – borderline damn good. It’s light hearted but it fits. I enjoyed watching the cut scenes play out which I rarely care about in most games. Witty banter goes a long way. Not the in-game dialogue – but the cut scenes are well written and acted.

2: Most important: The shooting is excellent. From the targeting of robot body parts and shooting their heads off (which make them attack each other) to the inaccuracy that comes with being shot while aiming with your sniper rifle. The guns are satisfying, and the set pierces are extremely well done and it makes me forget the dumb ass Kinect support and the silly conversations I have with my team members.

When you get right down to it: the pew-pew in Binary Domain makes it worth the price of admission. This is a competent action game. That may not sound like a huge recommendation but sometimes competent shooting can go a long, long way.