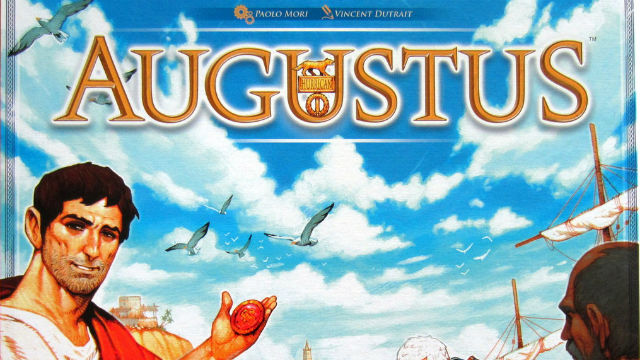 You might pick up a game clearly emblazoned with the legend “Rise of Augustus” expecting a wargame about the final wars of the Roman Republic. But you’ll have been cruelly fooled: the game is actually just called Augustus and is a light family Eurogame that casts you as assistants to the first emperor, controlling provinces and senators through the distribution of resources. Quite how the “Rise of” got tacked on to the English edition is beyond me.

You might also expect a game that comes in a box the size of the original Arkham Horror to be packed with a similar amount of heady cardboard goodness. And in a sense, there is, in the form of a truly colossal box insert to stop the few components rattling around. That’s a little unfair since the game is hardly expensive, but it’s annoying to have something taking up so much shelf space unnecessarily, just to store two sheets of tokens, a deck of cards, a few wooden meeples and a score pad. And it has to be said that the stylised art is wonderful.

Put all these things together and you get a game based heavily on cheap-ass gambler’s favourite bingo. Indeed if you read critical comment on the game elsewhere you’ll see it attracts a surprising amount of venom for daring to be so mainstream. This is also unfair. Not only because the fact it’s mainstream means the game is directly simple and accessible, but also because the designer has gone to considerable pains to spice up the old classic with a generous dash of modern gaming.

For starters you’re trying to match symbols drawn out of a bag rather than numbers. That might sound like a thin veneer of theme, and it is, but it also means the odds are weighted more in favour of some symbols than others. Instantly, there is light strategy: you get a choice of objectives in the form of senator and province cards, each with a different mix of symbols needed for completion, so players need to spread their bets according to the likelihood of the draw. But there’s another catch. Rather than simply marking off every matched symbol as it comes up, you only get seven legion pieces for the job and so must focus on certain objectives over others in order to complete a card and free some legions.

Further opportunities for strategy exist in scoring. Objectives are worth hugely variable amounts of points, with easier cards worth less meaning clever players can adapt their style to focus on quicker or slower objectives depending on who else is playing. But many don’t have a fixed value but are instead calculated on other factors. How many of a certain symbol there are on the cards you’ve won, for instance, or the number of provinces of a certain colour that you complete. In addition there are some bonus tiles for the first player to reach certain goals, like collecting three Senator cards or the first to six overall.

Okay, so it’s hardly demanding. But that’s part of the charm of the game. It’s incredibly accessible, desperately easy to pick up and play being based on a culturally familiar game furnished with appealing art and a few extra rules and taking less than thirty minutes to complete. That makes it a superb family game. Everyone in mine liked it a great deal, even people normally resistant to games. In fact, playing Augustus made me realise that many of the other titles people had seemed to enjoy like Carcassonne and Kingdom Builder had largely been merely tolerated. My seven-year old daughter loved it so much that she asks for it constantly and is refusing to play anything else. 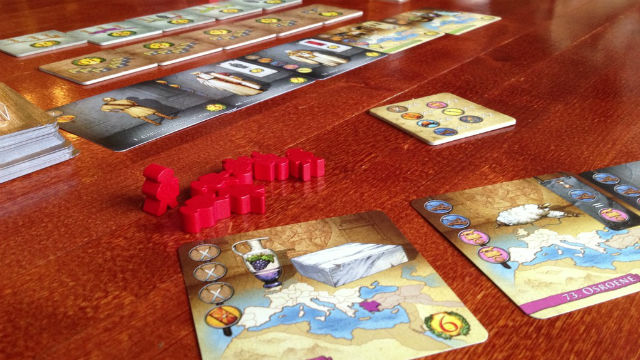 In some respects, that’s a surprise. There are elements to Augusts that don’t fit well with the stereotypical family game. It can, for example, occasionally get quite nasty. Many of the objective cards, in addition to scoring points, also have a special power. Most of these are fairly innocent, such as giving a player some free legion placements, or an extra objective draw, but a few are directly interactive, forcing other players to remove legions or even completed objectives. Hardly a recipe for group harmony.

In addition there are bonus tiles for the player with the most objectives that produce gold and wheat. I say “most” but in fact as soon as someone draws level on production count, they can take the tile away from the player who currently has it. It’s an odd mechanic, this. Not only is it potentially upsetting for a young or casual player, but it can terribly imbalancing. There aren’t many objectives with gold or wheat on them, so often the first player lucky enough to grab one gets the bonus points, and it can be decisive in determining a winner. And when the game is over, there’s an annoying period of score toting rather than an immediate winner, which is rarely a crowd pleaser for non-gamers.

And yet the evidence is clearly that Augustus works as family fare. Not only from my own household, but from the testaments of other players and the fact it got nominated for this year’s Spiel des Jahres. So, given the huge appeal, why isn’t it sat at the top of every gamer’s family-friendly collection?

The answer, sadly, is because it doesn’t work all that well as a gamer’s game. Essentially it’s far too lightweight, but neither thematic nor exciting enough to compensate. And it has a number of features that can actually make it actively annoying if played with people inclined to take games too seriously. Players who want to win will do well to keep a close eye on what other people are collecting to try and deny them the opportunity to collect bonus cards. In reality that means frequent pauses while everyone looks over everyone else’s objectives. And the really competitive will be motivated to do things like try and track everyone’s scores as the game goes along, which slows it down to a snail’s pace of excruciating tedium.

But if you can keep things clipping along at a fair pace, though, it can be fun. And as a gamers, there’s immense pleasure to be had from owning a title that can draw family members together so effectively and let you watch them enjoying themselves so thoroughly with your favourite hobby. But really, deep down, I think I’d rather they went back to Kingdom Builder and Carcassonne instead.