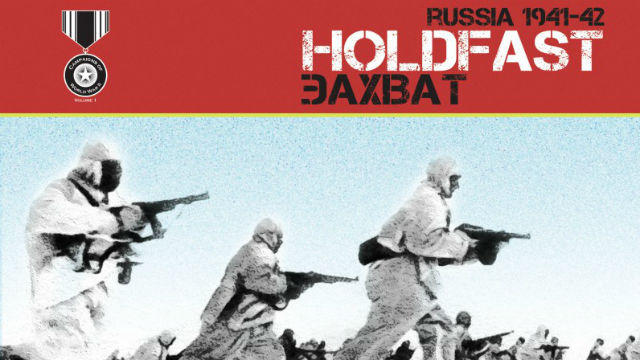 I’d wager that the Eastern Front of World War 2 is the most common setting for board games, ever. More so than the far future, or a Tolkienesque fantasy or even satisfying the whims of Renaissance nobles. So why do Worthington Games think we need another?

Instead, Hold Fast bears comparison to the best pick up and play block games, titles like Hammer of the Scots and Julius Caesar. If anything, it’s even more stripped down. In just four pages of rules you get a passable simulation of the Eastern Front and a thick chunk of excitement and strategy.

The way the designer has stripped everything right down to the barest essentials is marvelous to behold. It’s like a scavenger removing everything functional from a burned out car and then using it to rebuild a go-kart. Nothing is wasted, and everything re-purposed to maximum effect.

Both sides have a pool of “replacement points”, or RP’s, which drive the game. You spend them to move units, activate them for fighting, and to refit and redeploy units that have been damaged or destroyed.

Using one central resource for everything immediately puts players in a quandary about what to spend them on. But it’s also realistic, since all depend on resources that make a unit fit for combat.

After this masterstroke the design just tweaks the way players receive and spend these points to do most of the heavy lifting. Adding a destroyed unit back to the map and long-distance rail movement cost more than mere step replacement or standard marches. So the Russian player, with weaker units farther from supply centers, initially has to pay more just to stay in the game.

So it begins with the Reich tearing up the Russian front lines like confetti. The advance feels unstoppable, and the Russian player will be nursing his point pool like heart’s blood. The Soviets need every last one to keep up the production belt of replacing destroyed units, and pushing them forward to throw up desperate new defensive lines.

While the Germans start out looking invincible, the Axis player will eventually consider the victory conditions. Winning depends on capturing two of Leningrad, Moscow and Stalingrad and the latter two look a long way east. He might be able to advance across the map with impunity, but maintaining supply lines – a simple matter of unit chains to board edge – isn’t so easy.

Then the mud hits, and the Germans lose a dice of points each turn. Then the mud freezes with the oncoming snow, and they lose two dice of points. Just as the pincer is scything shut onto Moscow, everything literally freezes to a halt. The Soviets, meanwhile, get to shore up their line. Then there’s a steady trickle of Guard units on the reinforcement track which hit hard enough to start pushing the Germans back.

And the rest, as they say, is history. 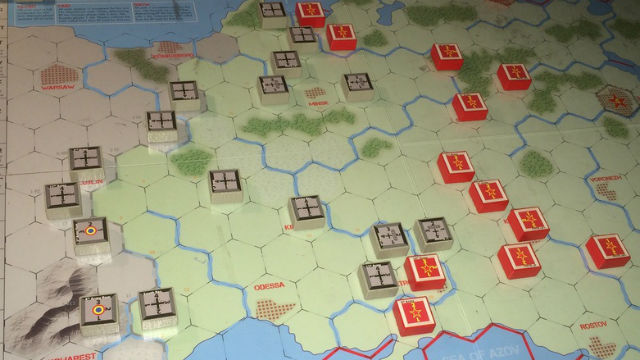 While the overall ebb and flow of the game might be somewhat predictable, there’s plenty of dice to thrill and detail to puzzle over. Combat is a matter of both sides throwing their dice and hitting on fives or sixes. One pip over one battle in one victory city can be the difference between victory and defeat. The fact the game wraps in about three hours makes that far more edge of the seat excitement than annoying over-randomness.

The German commander has the same dilemma as his historical counterpart: whether to advance evenly or make a powerful thrust to the north or south. Both players will need to watch the supply lines like hawks, alert for any chance to break in and cut off vulnerable units.

The latter is a particular threat thanks to yet another clever piece of design. There’s no distinct movement and combat in this game. Units can move and fight or fight and move as they please. This makes an excellent recreation of blitzkreig tactics at virtually no rules cost. First you attack to open up the line, then advance those spent units through to maintain supply. After you can bring fresh units via the gap to punch at new targets for an encirclement.

On the flip side, it can be hard to track which units have done what. The game provides no markers for this purpose although it’s not hard to artifice your own. They won’t look out of place, either, because the production values on this game are rock bottom.

This isn’t a light accusation. Even amongst other wargames, a genre renowned for flimsy card and ugly art, Hold Fast stands out as an eyesore. The block stickers are no more than a red star or an iron cross and some numbers. The board looks to have stuck together from the thinnest card known to humanity, garnished with bits of clip art. It isn’t even functional – it’s hard to tell swamp from Germany, and some of the unit starting positions are not clear.

Those printed positions are symptomatic of the other major flaw in this otherwise tight and imaginative game. There’s only one scenario, and not a great deal to mix things up for unexpected surprises. You’re likely to find that the replay value on this isn’t quite up to that of some of its peers.

That makes it relatively poor value for money, since it comes with the premium price tag common to many niche games. And that’s a shame. Because while this isn’t quite up to the standards of the all time block classics, it only falls short by a whisker. It’s a superb introductory game and deserves to be better known. But when it looks so bad and costs so much, the chances are it never will be.