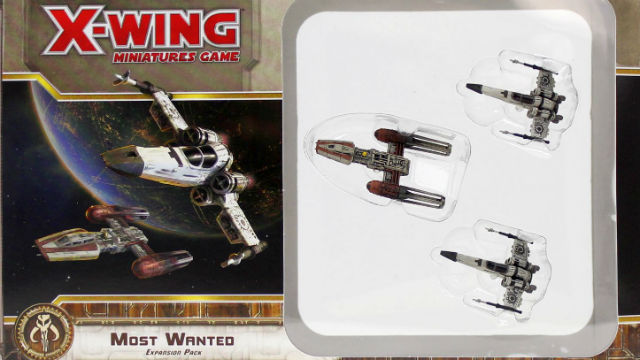 Recently, I started playing X-Wing against someone who really knew their Star Wars. They knew that Howlrunner was a female pilot, and where the YT-2400 freighter originated from in the expanded universe. They also told me something interesting: that the Hutts and their criminal networks were a faction equal in power to the Rebels of the Empire. What looked like a footnote in the films was actually a major player in the galaxy.

At that moment, I decided I needed Scum and Villainy.

Before this revelation, I’d dismissed it as a cynical marketing gimmick to sell more ships. Especially more Z-95 and Y-Wing models, designs that have languished in popularity since launch. And it is, of course: some of the ship options make that abundantly clear. It’s just that now, it looks like a fun and attractive marketing gimmick rather than a cynical one.

That said, the core set to this new faction, Most Wanted, represents good value for money. You get three ships – two Headhunters and a Y-Wing, all with variant paint schemes – and a slew of upgrade cards. It’s especially good value for Rebel players because, of course, these ships can be used in Rebel squadrons too. All you need is a Rebel version of the ships for the correct pilot base tokens.

As well as having all the cards and tokens for the ships in the box, Most Wanted provides Scum & Villainy branded pilots for some existing ships. One, of course, is the Firespray. Which means, of course, that there’s another Boba Fett pilot card. This version gets rerolls for each enemy within range one.

There are also variants for the unloved HWK-290. While they don’t make that awful ship any better, there are a couple of neat new pilot skills on offer. Who isn’t going to glee at the idea of stealing enemy focus tokens, or of taking stress to cause automatic damage to ion-disabled targets?

These sorts of abilities are emblematic of the feel of Scum and Villainy. Some of the pilots like to fly by themselves, others can pinch tokens off friendly pilots. There’s even an new kind of “illicit” upgrade, which offer nasty surprises to the enemy, like discarding to gain a free 360 degree attack. Flying a Scum squadron feels more like a ragbag collection of selfish individualists than a well-drilled military wing. And that’s exactly how it should be.

For players who are more heavily invested in Imperial ships, the benefits of Most Wanted are more questionable. There’s one or two useful upgrade cards, but nothing special. Some people may want to get in to X-Wing and start off with Scum and Villainy, and for them Most Wanted is an essential starting point. They’ll need at least one or two more ships to build a squad, though.

And what better place to start than with the Starviper. This ship is the reason I was looking for an excuse to get in to Scum and Villainy. Not because it’s overpowered or has unmissable tasty upgrades, just because it’s such a beautiful model. Like some pale, ghostly space butterfly cruising through the cosmos. It might be the best-looking ship in the whole Star Wars canon, and this miniature does it proud. 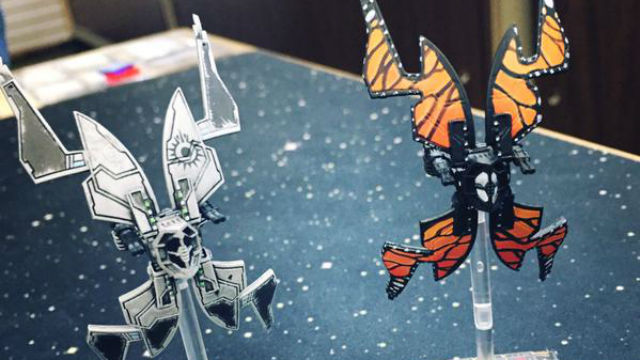 It’s no slouch in battle, either, although with a high point cost and one shield and four hull, it’s vulnerable to critical hits. To compensate it’s very maneuverable. It also has a new move, Segnor’s loop, with allows the model to about-face after taking a gentle left or right turn.

Segnor’s loop is also available to the only new big ship in the range, the IG-2000 Aggressor. Indeed this beast is incredibly dexterous for its size, also being capable of the standard K-turn, and having three attack and evade dice to boot. The fluff says that this is because the pilots of these ships were bounty-hunting droids, which didn’t need life support. So all the extra space could be filled with engines and weapons. In reality it seems an excuse to make this a small model compared to the other big ships, yet charge the same price.

In addition to that powerful stat line, the IG-20o0 title card has another surprise. Each pilot can use the pilot abilities of every other friendly Aggressor pilot on the board, regardless of distance. This at once creates fascinating tactical opportunities while being an obvious stunt to try and make people buy these models in pairs. I guess it’s just a mercy that at 36 points each, you’re only going to see two in a standard 100 point list. Either avoid this, or be prepared to invest heavily.

Which leaves us with the odd one out, the peculiar Syck Interceptor. At first glance, there’s nothing to recommend this. It’s similar to a TIE fighter, but swaps some speed and maneuverability for one point of shield. The model is ugly, aside from a nice metallic sheen. It’s so obscure that even my Star Wars fan opponent has likely never heard of it.

So what’s the point of them? Well, for two points you can buy the “Heavy Syck” title which allows you to mount a cannon, missile or torpedo option on your strange little ship. That’s not interesting in itself, but it does offer quite incredible flexibility for squad building. If you’re desperate for a particular combo that won’t quite work with the other ships on offer, chances are a Heavy Syck can carry what you need. That still makes it far from an essential purchase for Scum and Villainy players. But having one around might prove handy for creative squad builds.

And that’s the current contents of this wretched hive. At first glace, it’s hard to see why someone would want to run a whole squadron from this faction. Existing players will buy selectively for spare ships and handy upgrades. But without the draw of iconic movie starfighters, these appear destined for collectors only.

Playing with the ships, however, makes it clear where the appeal lies. While the Rebels and Imperials execute their military maneuvers with bland precision, the Scum are full of pomp and flavour. The lack of film tie-ins leaves a blank canvas for you to paint your own characters and stories. Without such obvious co-ordination and killer combos as the existing factions, you might not win quite as many games. But my word, you’ll have a lot of fun trying.