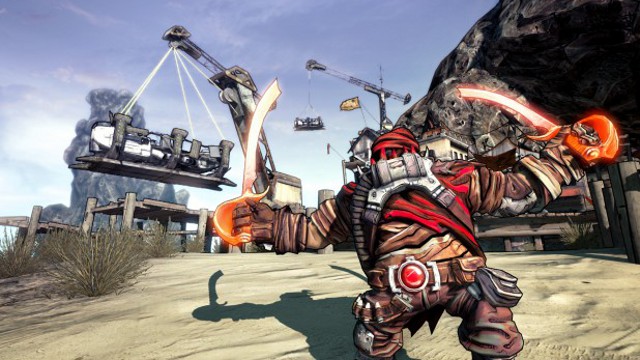 I don’t know at what size or at what point what we traditionally call “DLC” gets magically transformed into an expansion pack, but make no mistake, Borderlands 2’s first piece of story related content, Captain Scarlett and Her Pirate Booty is a full fledged expansion pack, giving players thirsty for more Pandoran mayhem a healthy portion of new areas to explore, guns to find and enemies to kill. 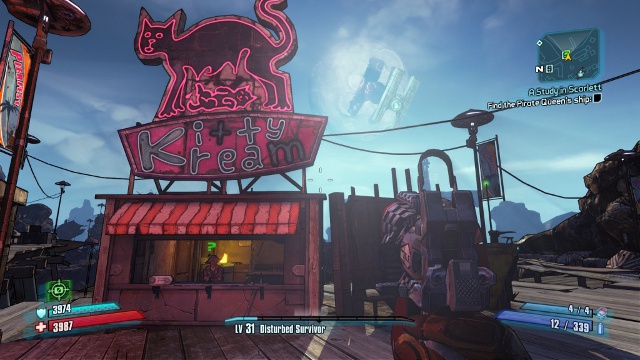 Your first stop in the expansion pack is the town of Oasis, a combination of awnings and pastel colored buildings, evoking a somewhat twisted take on beach hotels and seaside resorts. One man resides in the town, the rest of the residents having died of thirst, and what a fellow he is. Named Shade, he looks like he dropped right out of Fear and Loathing in Las Vegas, complete with bucket hat, tropical shirt and large sunglasses. Seeing how one of your first quests for Shade is to check on the “residents” of the town, corpses he strung up or placed in cars, complete with megaphones strapped to their heads so that he can provide voices for the dearly departed, it doesn’t take long to see that Shade is quite crazy. He’s also infatuated with the Vault Hunter and this combination of insanity and obsession allows him to alternate between creepy and hilarious with extremely entertaining results.

It’s not long until you’re contacted by Captain Scarlett about teaming up with her to find Captain Blade’s Lost Treasure of the Sands and the real adventure of the DLC begins. The DLC boasts some pretty large map areas, from vast seas of sand, navigable by the sand skiff, a two person vehicle obviously ripped from Return of the Jedi, but so much fun to drive that you don’t care, to abandoned refineries, lost underground springs and a junkyard set atop a mountain ridge.

You’ll have plenty of opportunity to visit all of these areas, as the quests in this expansion pack are a lot more fetchy, for lack of a better word, than in Borderlands 2. The game also is a little less free with doling out side quests, keeping them hidden until you’ve turned in main quests which, in my playthrough, resulted in a lot of revisiting areas I had just cleared, all because I decided to wait and turn in a number of quests at once. A word of advice, resist the urge to turn quests in en masse. Turn them in once you’ve completed them and you should avoid a lot of unnecessary backtracking. 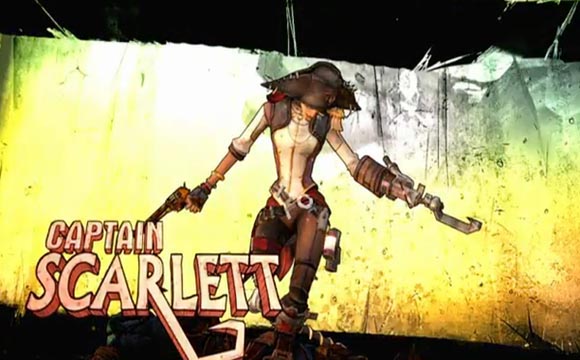 Despite the fetch nature of the quests, the writing and characters met along the way make them pretty dang entertaining. In one Shade’s creep factor gets dialed up to eleven on his marriage proposal quest. In another,you meet an old man obsessed with getting back into Captain Scarlett’s good graces. One quest line has you learning about what happened to Captain Blades and his ill-fated crew and one line of quests, my favorite in the DLC, has you stamping out profanity, software piracy (cleverly entitled “Don’t Copy that Floppy”) and pornography at the behest of a prudish Hyperion loader. Having grown up during the Congressional inanity that gave birth to parental advisory stickers on CDs, that last set of quests was particularly funny.

Borderlands wouldn’t be Borderlands without enemies to fill with corrosive, exploding bullets and sticking with the pirate theme, the expansion packs’s enemies range from cursed pirates that steal health with every strike, grenade tossing powder men, suicidal pirates rushing you with flaming bottles of grog, midget cabin boys and armor clad harpoon men, capable of injuring you and dragging you towards them to inflict more damage. Hyperion loaders still litter the landscape as do sand worms, a less annoying, but no less dangerous form of threshers. 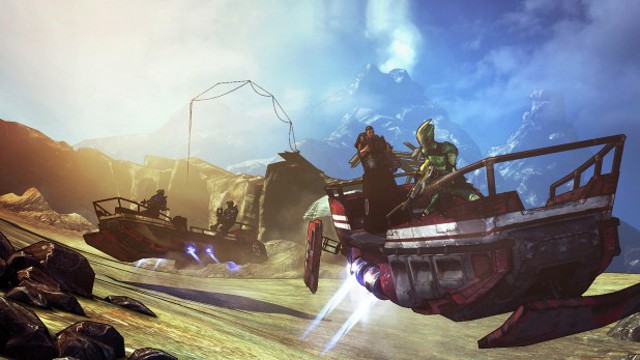 Quests are capped at level 30 for those on their first playthrough, with True Vault Hunter mode setting them somewhere in the low 40s. It was a little disappointing to see the quests and enemies set at such a low level for the first playthrough, ditto for the loot, but hey, that’s what TVH mode is for. The game’s two raid bosses, Hyperius the Invincible and Master Gee are both set at level 50, and both require more than just a Bee shield and a Conference Call to take down. Hyperius is protected by a number of shield bots, and unleashes nasty shock waves and a crippling melee attack, all but ensuring that solo players have a very bad day, while Master Gee is surrounded by sand worms, worms that unleash room filling corrosive gas when killed. Either bring someone to make with the heals, or plan on losing a bunch of money. In one of the DLC’s only missteps, the raid bosses are only accessible once a day, so if at first you don’t succeed, move your system clock forward and try, try again.

One of the best things about your journey with Captain Scarlett is how well it integrates into the main game. Almost everything crosses between Borderlands 2 proper and Oasis with the sand skiff being the one notable exception, a shame given how fun it is to try and launch the skiff on to every piece of architecture in the desert. Other than that, you’ll get experience, money, loot and challenges towards your badass rank by playing the DLC, same as with the main game and you can move between Oasis and the rest of Pandora as much as you want.

I enjoyed all of the DLC for Borderlands, save Moxxi’s underdome, for all of the reasons I enjoyed Captain Scarlett and her Pirate’s Booty. Gearbox does a great job of giving players more of what they liked in the main game, but at the same time, making the new content both expansive and sufficiently different to where you don’t feel like you could skip it and just revisit parts of the original game. The fact that this content is filled with such weird and enjoyably creepy characters helps, too. I bought the season pass, so I’m on the hook for all four pieces of Borderlands 2 content. If this DLC is any indication, I’ll definitely get my money’s worth.

Captain Scarlett and her Pirate’s Booty, the first of four planned Borderlands 2 expansion packs drops today and I couldn’t be happier. I just finished the main game yesterday morning and am in the midst of mopping up the last side quests while at the same time, going back through the game in True Vault Hunter mode. Yeah, I have Dishonored. Yeah, I have Sleeping Dogs. Yeah, I have Walking Dead Episode 4. I don’t care. I want more Borderlands 2, whether it be DLC or redoing the main game just with harder enemies and better loot. Those other games aren’t going anywhere and level 50 is a loooooooong way off.