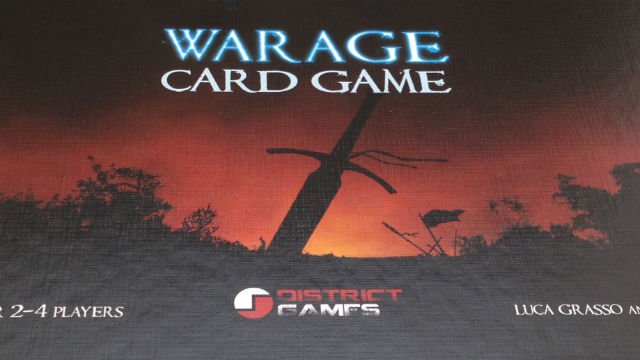 You’ll realise, no doubt, that Warage is a clever play on words. Making a compound of “war” and “age” cunningly creates the word “rage”, conjuring the white heat of fantasy melees, the ancient and primal fury felt my elf for orc and vice versa. It’s a smart title.

The game underlying it is not smart. It’s a dumb game, but it’s dumb in a good way, the sort of way that an overly playful rottweiler puppy is dumb, full of teeth and fluff and eagerness. It’s a game where you slap down cards, gloat and chug back beer.

In this it is markedly different from most of its brethren in the Living Card Game fraternity. Most LCG’s are scrupulously focused on the two player experience, and consist on an intricate dance of variables in both deck building and card-by-card play.

Warage takes up to six players, and up to four can play using this introductory set alone. And the things you have to track are scores for magic, melee, defence and hit points, which are used as a sort of catch-all currency with which you sustain damage and pay to put cards into play. And that’s it.

Your deck consists of a character type and a race, which will give you your starting stats and a couple of special abilities, and 48 equipment cards with which you gradually fill your hand. On your turn you can sacrifice hit points to play cards from your hand into equipment slots for your character to use. Then you can either make one melee attack followed by as many magic attacks as you like, by simply adding your base score for the attack type, any buffs from weapons or equipment and a dice roll and comparing it to your target’s defence plus buffs and a dice roll. They take the difference in damage.

There’s more to the game than that – you can sacrifice cards in play or blind from your deck to regain hit points, for instance – but not a lot. And yet, in that curious way that Living Card Games have of being more than the sum of their mechanics, this pared down rules set manages to offer a wealth of possibilities by being as tricksy and imaginative as possible with the variables at its disposal.

There’s a card that allows wizard types to pay a few hit points to use their magic score in place of defence, for example, and an axe that allows the wielder to skip damaging his opponent in favour of blowing away some of his equipment instead. There are minions you can bring into play too, like the Merchant who is expensive to buy but grants you a higher payback when you sacrifice cards although he, like all followers, can be targeted and killed himself. 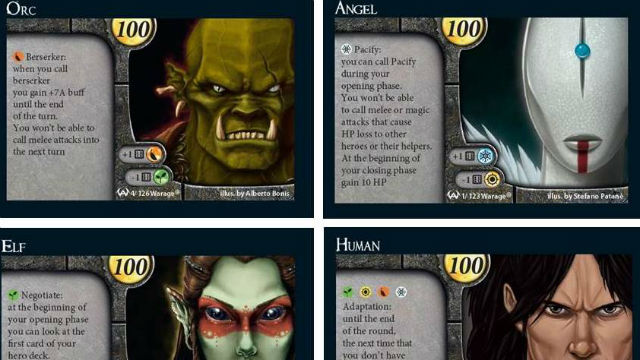 With enough cards, it’s amazing how many different combinations you can build. The majority are just simple stat buffs, it’s true, but there’s certainly enough to deck build with, although you don’t even have to do that since the game comes with four pre-built decks so you can just tear off the shrink and get down into the action. But just like the gameplay itself, there isn’t a whole lot of depth to deck building. You just string together cards that look fun and powerful and hope for the best.

Those who’ve been paying attention might have spotted some possible balance issues. Only one melee attack per round, but as many spell attacks as you like? Sounds like a recipe for disaster, as does the lack of a cap on stuffing your deck with ultra-powerful cards. But there are checks in place: warrior type characters have high attack and defence scores compared to magic users and lots of ways to buff them further, so their one attack is devastating and they can shrug off the repeated needling of their wizardly counterparts. And powerful equipment costs a lot to play, so wear too much of it and you’ll deplete your hit points until only one lucky die roll will bring you down.

The ability to cash in your equipment for a quick heal if you’re at death’s door can make games drag a little, but some common sense needs to be applied: in most cases if you’re at the point of stripping your gear and other players aren’t then doing so is just prolonging the agony. Better to take a quiet exit. And as long as the game is kept clipping along at a reasonable rate you can expect them to last about ten minutes per player, which is about on the money for such a lightweight brawl.

There will also be inevitable complaints about multi-player. There are two modes, team and individual but both allow players a free choice of targets from amongst their enemies and so positively encourage table-talk, alliances, banter, king-making and all the other deadly sins of modern gaming. Which would be a bad thing in an intricate four-hour plus game of empire building but is perfectly suited to thirty minute grudge matches.

One thing that doesn’t work so well is the amount of trivial maths it involves. Your starting pool of hit points is 100, and it’ll be going up and down in increments constantly as you buy equipment, heal and take the pain from your opponents. There’s a lot of adding and subtracting and it sits ill with the loud, brash nature of the play itself. This is a game I want get involved in when I’m too wasted to do sums. My copy came with some free card sleeves, but I kind of wish it had come with a free calculator instead.

Warage has balls. I admire the fact that it dares to be something a bit different in an overcrowded genre, and that it dares to make the differentiation the lowest common denominator of being simple and stupid, trashy and thematic. I like the way it features mechanics that seem designed to frustrate and annoy people who chose to try and play it optimally rather than obviously. It might well be that it’s too simplistic to maintain long-term interest, and that the inevitable expansions that attempt to address that problem will spoil the careful balance of light rules and fast games that make it work. But for now, it’s all the Warage.