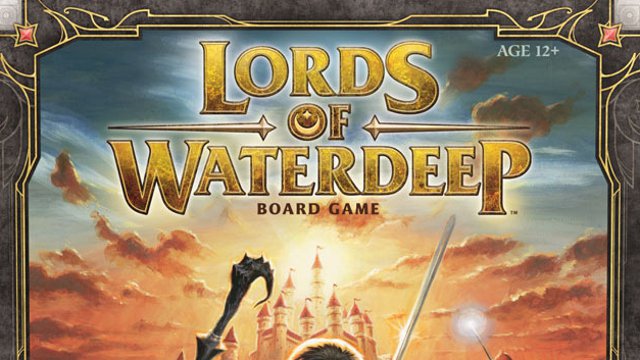 I don’t like worker placement games. It’s the most tired, overused and systematically abused board gaming mechanic on the planet, and while it has produced the odd important game in the past, the monotonous regularity with which new and entirely derivative games based on it continue to appear is beyond parody. It was therefore with some trepidation that I discovered Wizards of the Coast had decided to continue their triumphant re-entry into the board gaming mechanics by releasing a Dungeons & Dragons game using worker placement, Lords of Waterdeep. More so when I got sent a copy to review.

One of the signature issues with poor worer placement games is a startling lack of connection between theme and mechanics. There’s no particular reason that this should be the case: the basic principle of having a limited pool of workers and assigning them to carry out a variety of different tasks each turn would seem to have a variety of real-world applications. And clearly the people who designed Lords of Waterdeep understood this and went to a lot of effort to buck the trend. Each player represents one of the secretive lords of the greatest city in the Forgotten Realms, and sends agents into the city in order to accumulate resources such as gold and adventurers to complete quests that help keep the city from harm. It hangs together well as a cohesive whole, aided by sensible choices about the things needed to complete different tasks: recruiting for the city guard requires your agents to muster a few fighters together, for example, while exploring the caverns underneath the city to clear out a nest of Beholders requires a large, diverse and well-equipped party. Cards and other requisite materials are lavished with quality art and thematic quotes to help get and keep players in the right frame of mind.

So given the effort that has been expended on overcoming this oft-lamented obstacle in the genre it’s a shame to see that it’s largely wasted. All the right ingredients are there but the game portrays action at a level so much higher than the meat-and-potatoes of quest fulfillment that it tends to just get ignored. A player might need to send secretive agents into the city to recruit three thieves and two clerics in order close a portal into a nether dimension of unimaginable evil, but what he’ll actually say is “here’s three black and two white cubes, someone add twenty victory points to my track please”. If you can find a group of players who are deeply familiar with the Forgotten Realms setting, and enthusiastic enough about it to really put the effort into making the theme come alive (and Dungeons & Dragons has sufficient devotees to make this a plausible scenario) then it’ll probably work. But for most gamers, all that detail will simply pass over their heads. 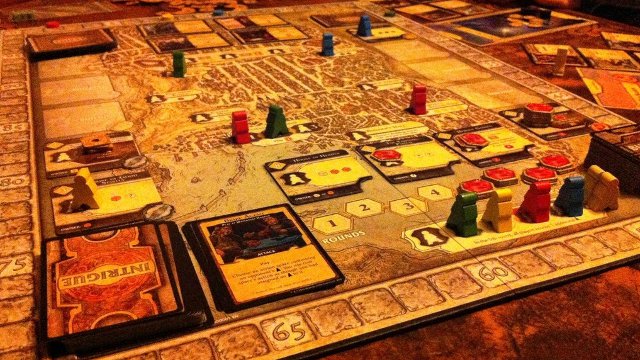 I’m pleased to report, however, that similar ingenuity has been employed in other areas of the design to much better effect in pursuit of the apparent goal of attempting to sidestep or improve on pretty much every single criticism that’s commonly aimed at worker placement. For example, a frequent problem with games of this type is the repetitive deployment of the same tactics in game after game, leading to rapid disinterest and disillusionment amongst the players, almost as if the game has been “solved” in a mathematical sense. Against this, Lords of Waterdeep deploys the effective weapon of variety. It lifts a mechanic wholesale from another (and infinitely duller) worker placement game, Caylus, in which players can pay to create new buildings with a wide variety of different effects: new resource combinations, the ability to sidestep rules, the potential to swap resource types are the most common examples. If other players send their agents to these buildings then the owner gets a small bonus effect for free. There’s also a lot of variety to the quest cards. While the majority simply require you to pay adventurer cubes and gold in return for victory points some are labelled as “plot quests” and give you a permanent bonus for the rest of the game such as bonus victory points for certain quest types, or the ability to get bonus resources when you take particular actions. In two cases the reward is an extra agent which can be a game-breaking power-up if acquired early on, although this is rare. But for the most part these innovations work together to make sure that the strategies the players need to employ to win have to be changed from game to game to make best use of the available buildings and plot quests, and thereby stop the game from getting jammed in a tactical rut.

Another frequently-cited issue with these sorts of games is that there’s little meaningful player interaction. In the name of trying to ensure that players can’t gang up on one another and unbalance the game, interaction in worker placement tends to revolve around watching other people’s developing positions carefully and blocking their access to key resources by taking them yourself. And again, this is certainly something you can do in Lords of Waterdeep, although the availability of different buildings and the limited number of different resource types (five: four different kinds of adventurer and gold) means it’s less effective than in some other titles. But the game makes up for this, and more, by adding intrigue cards.

Intrigue cards are perhaps the very best thing about Lords of Waterdeep. They have a wide variety of effects which range widely across the interaction scale. Some of them give you useful extra abilities, like the chance to assign an agent to a space already used by an opponent. Others give you free resources but allow the other players a smaller freebie of the same type. Some permit you to discard or steal the resources of other players, sometimes giving them the option to swap these for victory points. There are mandatory quests, irritating low victory point tasks that you can assign to other players to complete before they can finish their existing quests. In short they offer a huge variety of small ways you can screw with your fellow gamers, into which is mixed more tactical choice and none of which unbalance the game. There’s even an interesting mechanic used when you play them: you have to assign a worker to do it, which seems steep just to lay a card, but you get to reassign him again at the end of the round, adding all sort of interesting issues around tactics and timing to the mix. They’re a brilliant, yet very simple innovation, and it highlights the staleness of the genre that no-one else has attempted to add anything similar to worker placement games in the past. 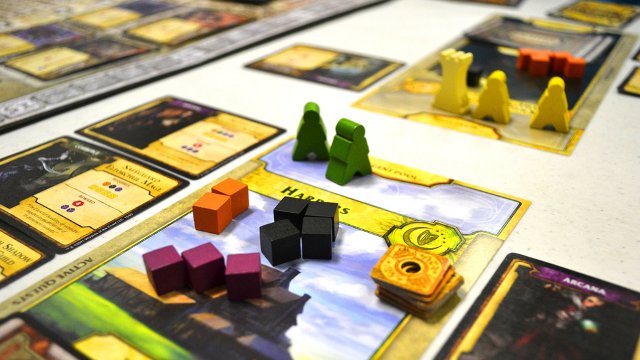 Indeed it’s possible that from this review so far you’ve got the impression that Lords of Waterdeep is a complex game. Not so – the rules are actually very simple and it’s very easy to learn and teach. It also plays in around an hour, with 90 minutes being the absolute maximum with a full load of slow players. Scales well too: more is generally merrier, but it’s still fun with just two. So you might well think it’s a suitable family game and indeed some players have reported that it works well in this role. Me, I’m not so sure. In common with a lot of games that manage to thematic and or reasonably deep off the back of a straightforward set of rules, Lords of Waterdeep pulls the trick of moving most of the theme and mechanics from the rulebook and onto the cards. Whilst the mechanical actions you go through in a turn are easy for anyone to grasp, actually playing the game in even a vaguely effective manner requires players to simultaneously digest and remember a fairly large amount of inter-related information regarding their quests, other player’s quests, available quests, a hand of intrigue cards and the available buildings. It’s a breeze for anyone who’s used to playing modern European-style games, but it’s a world away from mass market titles, and non-gamers are likely to still struggle for several sessions before they get the hang of it.

Lords of Waterdeep battered at my inbuilt prejudices regarding the genre and eventually won a hard-fought victory. It helps that addressing common complains about the mechanic seems to have been a guiding principle behind the design and that, for the most part, the solutions employed have been successful in producing a relatively thematic game that allows enough player interaction and variety to continually keep things fresh and interesting while still retaining most of the balance and strategic depth that are the hallmark of worker placement games. It’s still worker placement at heart, of course, and occasionally things drag a little, but on the whole it’s a solid and enjoyable design that should offer something to gamers of pretty much every stripe. Someone asked me recently what my three favourite worker placement games were: in point of fact I could only think of three that I would bother playing, but when he asked the question, Lords of Waterdeep was the very first name that came to my lips.