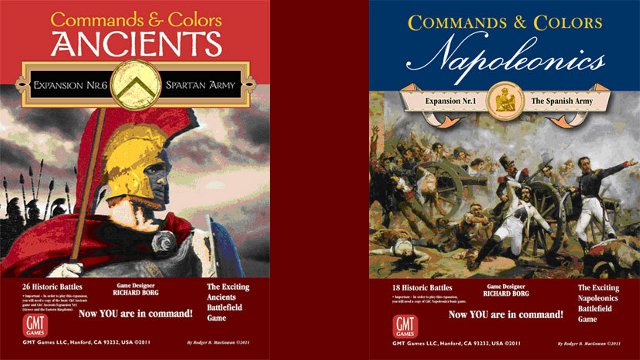 I have always said that Commands & Colors: Ancients is the best of this overly-large and diverse series, but only as a stand-alone game. If you’re willing to commit money and time to buying several expansions then ultimately, Memoir ‘44 by Days of Wonders pips it at the post in terms of game play, if not simulation value. The reason for this is simple: the Memoir ‘44 game has some important flaws, especially in terms of scenario design. Each of its three army expansions then does two important things. Firstly, they offer superior scenarios to those in the base game. Second, and more importantly, each has a simple new rule, applying to all the troops in the new army, that significantly differentiates they way they play from the basic Germans and US troops in the base game meaning you get more of the same fun from the base game alongside some interesting new stuff to revive your flagging enthusiasm. The best example of this is the Commissar rule from the Soviet expansion which requires the Russian player to select his command card a turn in advance, simultaneously making playing the army a very different experience, upping the tension and excitement in the game and encouraging the player to think and plan ahead more clearly. That’s a pretty amazing transformation for one simple rule.

The Commands & Colors: Ancients expansions, of which Spartans is, quite incredibly, the sixth and allegedly the last, have not followed this pattern. Instead each box has included the blocks and stickers for one or two new armies, one or both of which will have the odd new unit type for which there may be news rules or sometimes just slightly different statistics. There will be a whole bunch of new scenarios, one or two of which will give you some interesting special rules. If you’re heavily into history, then there’s plenty of value here. You’ll like that each army has new historically accurate artwork and is made up of an authentically proportioned unit mix, even if most or all of those unit types are identical to those of the base game. You’ll appreciate the fact that the new scenario books allow you to re-fight new and exciting battles from ancient history, even if quality-wise they’re no better than those in the base game. You’ll get a kick out of the overall novelty of the experience, even if strategically it’s no deeper than the base game, and no more exciting.

If you’re not so bothered about the history, then most of the new stuff will pass you by because in terms of actual game-play, most of the expansions simply don’t add enough new things to make them different enough from the base game to be worth your time and money. There are twenty scenarios in the base game, all of which are asymmetric and most of which are worth playing several times from each side, and for the majority of gamers that’s more than enough play time to exhaust interest in the system. There’s simply no need to go adding expansions to an already very good game. 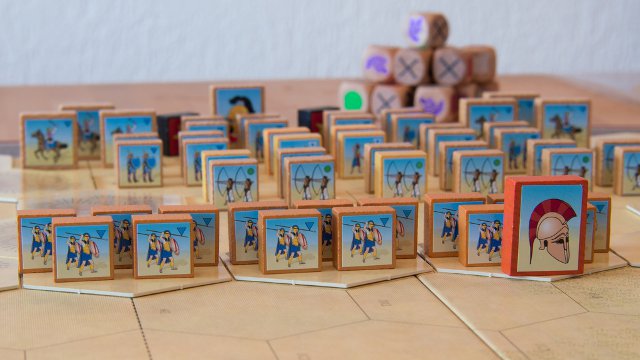 So what about Spartans? Well, for starters to play it you also need the first expansion, Greece & the Eastern Kingdoms, to make use of it. This is currently out of print, although a re-issue is in the works. Beyond what’s in that expansion, Spartans really doesn’t offer a lot of significantly new material. The single new unit is the Hoplite which is a standard medium infantry unit that can also be ordered by cards that affect mounted units, making them slightly more flexible than normal medium infantry. That’s pretty much it and I have to say I find that disappointing, possibly indicative of expansion fatigue. Alongside the Spartan army blocks, it has some other Greek blocks, such as the famous Silver Shields, which can be used in place of stand-in blocks in scenarios from the first expansion. Where things start to improve is in the scenarios: there are several very famous battles represented in this expansion, including two covering the battle of Thermopylae, which pretty much everyone must have heard of after the film 300. And they don’t disappoint: the Thermopylae scenarios themselves are the best of them. But, as I already said, there are a lot of very good scenarios in the base game. So this one really is for Commands & Colors fans with a particular bent for Greek history, and them alone. There’s simply not enough new and interesting here for more casual players to bother.

The Spanish Army expansion on the other hand, the very first of several planned expansions for the Napoleonics outing of the Commands & Colors system, is a closer match for the Memoir ‘44 model. Spanish blocks, in a horrible shade of dirty yellow, follow the same basic pattern as the French and British units from the base game but there are two important differences. Firstly Spanish infantry units suffer serious penalties for moving and firing, which represents their lower grade training and equipment compared to other European counterparts. Second the Spanish player has access to guerrilla warfare tokens which can be spent to cancel enemy command cards, effectively making him lose a turn. A whole turn, and yes, that’s just as powerful as it sounds. These two differences do what’s required and mean commanding the Spanish army requires significantly different approaches from base game troops. The nerf to moving and firing means you can’t confidently advance over open ground and trust to averages to limit the attritional damage you take, forcing you to find new ways to get to grips with the enemy. And this dovetails nicely, of course, with those guerilla rules, because they give you one possible way of doing just that. But mixed in are issues of timing, because tokens are limited and you’d better make sure you use them only when you need them. 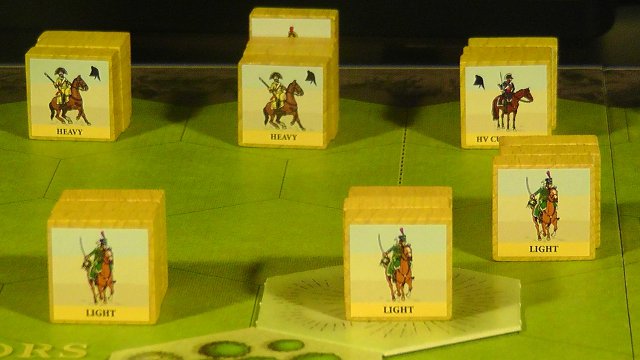 Scenarios, again, are at the same level of quality as the base game. There are also two new French unit types to add to the mix. It’s unfortunate that relatively few people will know much about the conflict between France and Spain during the Napoleonic wars (I didn’t) as it may limit interest and immersion in what, technically speaking, is a good and well-designed expansion.

So there you have it: possibly the longest introduction ever to two very short reviews, one negative and one positive. But it’s necessary, I think, because as the Commands & Colors system becomes more bloated with options, gamers need more information to make informed choices about what they do and don’t need. At least that seems a good excuse for my usual excessive verbosity, and I’m sticking to it.