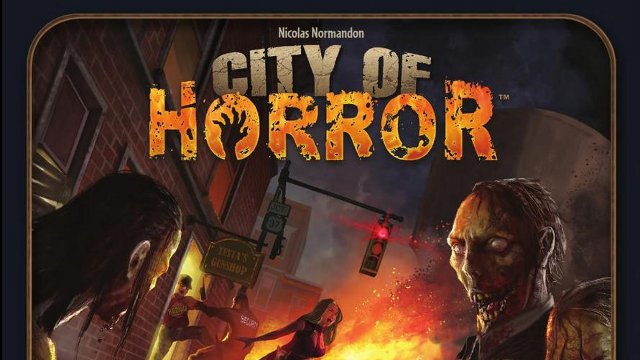 Zombie board games tend to focus, like the films they emulate, on the players surviving by putting up barricades and beating the undead to death with whatever they can find. But if you’ve seen enough horror movies you’ll know there’s a second string, a darker theme where cooperative groups mercilessly pick the weakest member to sacrifice to the shambling hordes so that the others might survive. That’s the grim base on which City of Horror rests.

And grim is the word. There are few games more callous than this. It’s not a game to play with relative strangers. It’s not even a game to play with friends that you can’t rely on not to hold grudges. Players control a variety of characters, spread around a zombie-infested city. Each turn there is a vote in each board area that’s accumulated sufficient zombies. Each character in that area gets to vote for who dies, and the character with the most gets eaten. Gone. No second chances, no dice, nothing. Eliminated.

There’s something refreshing about the brutal purity with which the game approaches death. But it also creates an instant rich get richer problem. Once a character dies, the owning player has less characters on the board, and so less votes, which makes it slightly harder for them to keep their other characters alive. You can always play the sympathy card to try and avoid being tossed to the ghouls but the mechanics encourage picking on the weakest. It’s been my experience that players tend to lose all their characters, or hardly any.

So the answer is to try other approaches to negotiation and trading. This is where the meat of the game is to be found. There’s a lot you can trade: promises, which may be kept or broken of course, but also material. Food is worth bonus points. Zombie plague antidotes are required to score points for any surviving characters, their precise value being dependent on whether they’ve used their special ability or not. And every player has a hand of action cards. 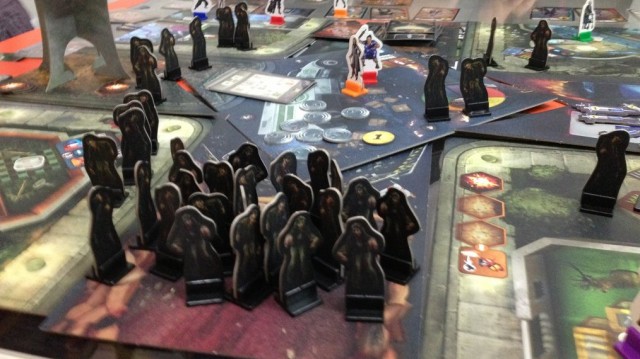 These action cards and, to a lesser extent, the abilities of the characters, are the primary way players exercise control over the whims of fate in the game. Many kill zombies, or allow you to move them to other locations, some at a cost of making areas of the board unstable to the point of eventual demolition, resulting in further carnage. Others allow you to sidestep the gruesome result of the voting process and other, more minor effects. They can be discarded in certain locations in exchange for beneficial effects.

They’re incredibly useful, and the urge to play them is constant. You only have five, used over four rounds each of which will see several votes. New ones appear on locations occasionally, along with other resources, which are distributed amongst characters there based on another vote, but they’re pretty rare. This sets up a situation in which the choice of whether to play an action card or keep it should create delicious tension.

Sometimes it is, but mostly it’s just plain frustrating. The cards are basically your most precious resource and are wonderful negotiating tools. But there’s no way of knowing whether it’s sensible to save them. play them or trade them. The game just doesn’t give you enough information to plan a meaningful strategy with the cards. And once they’re exhausted, the otherwise compelling negotiation loses some of its spice.

You may have noticed by now that although voting to distribute resources seems fairly realistic, voting to see who gets eaten isn’t. In practice the strong and the fast would have a considerable upper hand. So the mechanical link with the theme falls apart. There’s plenty of quality zombie art to compensate but sadly the card it’s printed on is rather lower quality, warping and splitting with worrying ease. There’s a lot of it too since the game uses cardboard standee figures rather than miniatures. 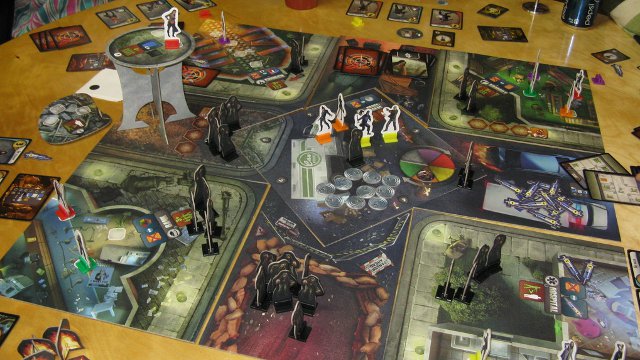 And without the theme you begin to see that underneath all that gory art, City of Horror is just another twist on the classic cut-throat negotiation game, exemplified by Lifeboats, Intrigue and I’m the Boss. None of those games does much better at presenting a theme than City of Horror does, but they don’t particularly pretend to do otherwise. They’re also a lot simpler and more direct than their undead relative. And, crucially, it’s debatable how much extra game the added baggage in the newer title creates.

We’ve already seen how the voting mechanic leads to a rich get richer problem, and how the use of cards as both currency in deals and board effects backfires. The value of the food and location effects varies tremendously from game to game. The ability you have to move one character each turn from one location to another is unthematic and, since selections are made in secret, basically random. What’s left is the character powers, the fact that using them reduces their score, and the need to collect antidote to score your survivors. That does add a fair amount of interest, but it just ends up compensating for the dead-weight rules.

Not that the game is overly complex. As is often the case with European games iconography has been used heavily to keep things language independent and as is often the case with iconography it’s largely confusing and impenetrable. But that’s a fairly minor annoyance. The game is also fast playing, taking sixty to ninety minutes to complete and that’s a poweful saving grace. You don’t mind too much if your characters start ending up as zombie chow and your game slowly falls apart when you know there’s an end and a re-rack within sight.

City of Horror is not, on the whole, a bad game. I’ve had more fun with it than the tone of this review may suggest. Its collection of mechanical niggles and rather blunderbuss approach to adding new and mostly ineffectual twists and theme to a classic genre are counterbalanced by its sheer, overwhelming nastiness. It’s not often that a game allows you to be quite so delightfully mean to the other players, and that’s something to be savoured. But ultimately while it’s likely to provide considerable amusement for a few games, it has issues enough to ensure either a limited shelf-life or only occasional table time. And in a crowded marketplace and a well-worn genre, that doesn’t quite cut the mustard.