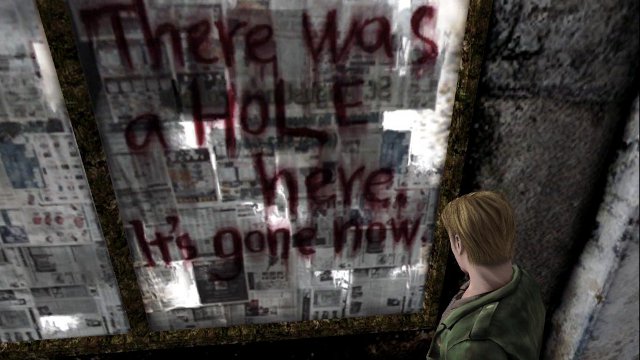 When Brian recently flagged up Lone Survivor, I was intrigued, not only by the game itself but by the thought that I hadn’t seen a survival horror title gain a lot of press attention in recent years, and that the genre was on something of a downward slope. A quick google search later I discovered that I’m very far from the only person to have been struck by this observation. Other commentators have put out some well constructed arguments blaming the evolution of intuitive gameplay and the fashion for action shooters, or the ascension of western-style horror over the Japanese version. But those are slightly out of date now, and, inevitably, I had my own opinions that I felt the need to share. And seeing as it’s Friday the 13th today, it seemed a good time to do it.

I can’t claim to be a genuine survival horror fanboy. Of the classic games in the genre I have only played the first two Silent Hill and Resident Evil titles. And I have to admit that I was always slightly surprised that Resident Evil got quite the plaudits and success that it did. Not that it’s a poor game by any stretch of the imagination, rather that its subject matter and shock tactics were so very well-worn from horror films and books even by the time it came out. Zombies as a byproduct of bioweapons research was a dreadful cliche even in 1996. Mad scientists and tyrannical corporations even more so and it didn’t help that the game did cringe-worthy things like using the acronym STARS for a special ops team and naming a female character Valentine to further cheapen the mood. But whilst the basis for the scares of claustrophobic environments and things jumping out from dark corners was equally unoriginal that aspect was pulled off with undeniable skill and made the games well worth playing.

In most respects I was rather more impressed with Silent Hill. I’m not sure there have ever been games that messed with my head in the same way that those first two titles in this series did. In the first one, the simple but extraordinary emotion of a father’s’ love for a helpless, suffering child is leveraged with uncanny brilliance to make the player care in a way that I don’t think any game has managed before or since. The second was less intense but more intimate in the manner in which it cast the player as a person who had committed a terrible, and yet entirely sympathetic, act, forcing you to confront the complexities of morality and human nature. I’m not the only one to have been deeply affected by the content of Silent Hill. The team behind it released the extraordinary Book of Lost Memories to detail, in appropriately artistic terms, their creative process while even more bizarrely one fan was moved to write a 130,000 word analysis of the series, which actually turned out to be a lot more interesting than you might expect someone deranged enough to write it would have managed.

And yet in terms of pure gameplay, I have to give Resident Evil the edge. It was simply more thrilling, more focussed and it lacked the kind of frustrating sequences that I alluded to a couple of weeks ago where you ran around a monster-infested town looking for things that could be, well, anywhere at all. Basically, killing grotesque things with heavy weaponry pushes at your primal excitement buttons rather better than complex plots involving syncretic religions and existential guilt. Developers and designers know this: that’s why so many modern big-budget games have heavy shooter elements, because the big budgets mean that studios can’t afford to fail with their designs, and they know from experience that extreme violence sells. And because those top-dollar designs can’t afford to fail, they can’t afford to be difficult, which is another vital feature of the survival horror genre, because without difficulty, you’re going to have trouble generating an appropriately fearful response in the player. And so in Resident Evil we see a gradual shift in this direction through the course of the series, culminating in Resident Evil 4 which was more of a shmup with horror elements than a proper survival horror game, but which was brilliant nonetheless. And that brilliance sowed the seeds of destruction for the genre because if you can have a great game that looks like a survival horror title but can guarantee top-grade sales, why bother making proper survival horror for an increasingly niche audience any more? 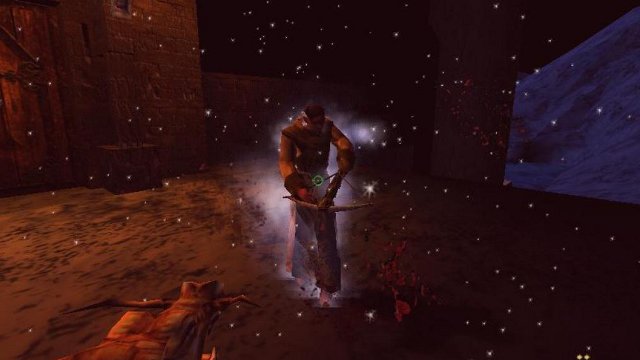 At least this is the way the conventional analysis goes, and it’s hard to argue with its basic tenets. However the presupposition seems to be that you can’t build a game that combines exciting combat sequences with genuine horror: offer the player too much firepower, too much capacity to deal with and control the hostile environment in which they find themselves and they won’t get scared. This is the bit I don’t get, because I’ve experienced otherwise, in at least three games.

Exhibits A and B are relatively obscure shooter Clive Barker’s Undying, and Half-Life 2. Both are in most respects fairly standard, if well above average in terms of quality, first-person shooters. Neither has a clear connection to survival horror, having bountiful levels of ammunition and nothing more than the occasional set-piece scare to keep you on your toes. And yet both feature what are, to my mind, some of the most extraordinarily memorable horror sequences of my gaming career. Undying featured a level set in a snow-shrouded ruin, through which the ghosts of monks flitted in the eerie half-light of a full moon, another in a hellishly bizarre otherworld, Oneiros. It also featured a “Scrye” mechanic in which you could look through the real world into the supernatural one to uncover clues and often, rather horrific surprises into the bargain, giving the player the constant sense that there was a whole gallery of unseen menace lurking just underneath the veneer of normality. In Half-Life 2 it was the intense feeling of sympathy the game generated for the appalling fates of the residents of Ravenholm and Nova Prospekt. In both cases, I was genuinely horrified. In both cases all that did this was carefully crafted environments and emotional responses. That’s all it takes to introduce horror into an otherwise standard action game of extreme violence. 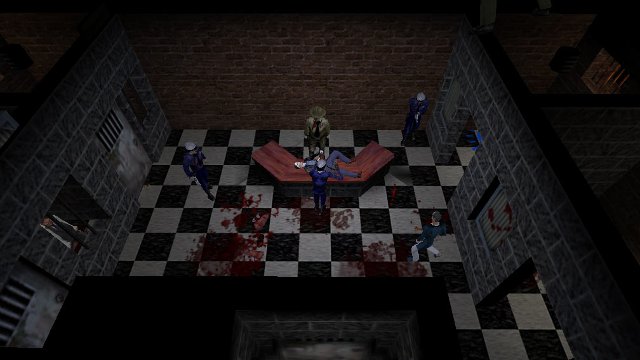 Exhibit C is a series of free mods for the original Half-Life called They Hunger. It’s you against the zombies again, that same tired old formula but I challenge you to play one of the games and and tell me that they’re tired, or in fact that they’re anything other than a living example of exactly what’s commonly held to be impossible: a survival horror game in the guise of a shooter. Ammunition is so dreadfully scarce that it got the point where I hated finding new weapons because I knew I wouldn’t be able to keep it supplied and would be worrying constantly as to whether I dared use it now in case something even worse was round the corner. The game rejected set-pieces scares and closed environments in favour of simply being overwhelmingly, oppressively dark. Not the pointlessly impenetrable blackness of Doom 3, but a perpetual inky twilight through which you could see half-shapes, suggestions of creeping movement that would have you desperately blasting with your limited ammunition at harmless bats while what was groaning in the blackness would suddenly come upon you from behind. And yet for all this disempowerment and terror it was still a shooter. Combat was fluid, skillful, exciting and satisfying. And it had the standard open-ended save model of old first-person shooters, so as long as you saved your game frequently, success was assured. Yet the game was so utterly emotionally gruelling that in some respects I couldn’t wait for it to finish, and what surer sign of a genuine horror experience is there than that?

Survival Horror as we knew it may be dead for good. But just as the best writers continue to find ingenious ways to keep our favourite horror villains coming back from the dead for installment after installment, there’s no reason why, with a little more vision, talented designers and developers couldn’t perform similar necromancy over the corpse of this seminal and much-loved genre.