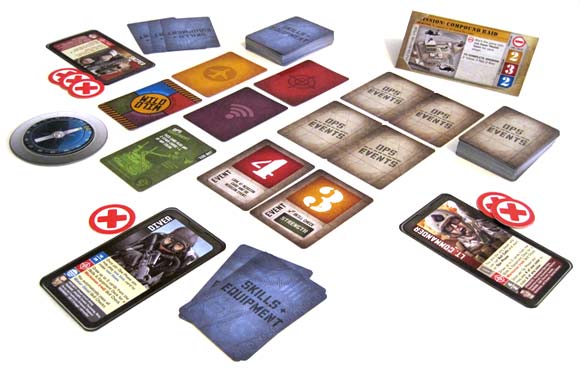 A couple of years ago, I played a prototype of an as-yet unpublished game that was essentially a scenario-based dudes-in-a-hall game with a modern, Special Forces theme. The game needed lots of work, but it really made me aware of how underused modern military conflict is as subject matter- at least on the tabletop. You’d think that with the popularity of such themes in video games that there’d be more crossover, but with a few rare exceptions there isn’t anything resembling a tabletop Modern Warfare. When I saw that US Games Systems was releasing a title called Hooyah: The Navy SEALS Card Game, I thought there might be a breakthrough. Unfortunately, the gameplay is closer to Ticket to Ride than Zero Dark Thirty.

Designed by Mike Fitzgerald, who did a couple of great Rummy-based mystery games and the underrated Wyatt Earp over a decade ago, Hooyah follows on by being a mostly abstract, unthematic game with solid mechanics. This is definitely a disappointment out of the gate because almost nothing most folks would want out of anything that claims to be Navy SEALS-related is represented. Conflict is represented literally by colored, numbered cards and unspecific skill checks. There are no “tangos”, and almost no sense of meaningful opposition. Gameplay actions and decisions are completely divorced from any sense of integration between theme and mechanic. Operation Neptune Spear- the raid that ended with a SEAL putting two bullets into Osama Bin Laden- boils down to cooperatively playing enough of those colored cards to match a couple of target numbers.

Mr. Fitzgerald’s strength is in designing traditional card games with a light dusting of subject matter, and that’s definitely the case here. It’s worked in the past, but not so much in Hooyah. He really does try to sell the Navy SEALS concept- in each description of the game’s included missions he at least tries to explain why you’re using particular colors to overcome obstacles since each coordinates at least in name to a SEAL skill. But it just doesn’t provide enough of a transitive layer to put the player in the situation and communicate the danger of the kinds of operations that SEALS take on or the almost superhuman skill with which they execute them. Character cards with negligible special abilities don’t equate to immersion or engagement.

It’s a cooperative game, and most of what goes on consists of drafting cards either from a display or a blind draw from a deck. There are some equipment cards that generally let you pair them up with other cards to make another color or provide a special function such as resetting the display. There’s a really quite cool timer mechanic whereby players only get a certain number of drafts before they start losing health, which adds a nice and rather unexpected degree of tension to a mundane game process.

One player is a Lieutenant Commander, and at any point he can make a Roll Call- this is a smart way that the game gets around the “what cards do you have” groupthink that can spoil card-based co-ops. If the LC feels like the players have a good shot at making it through the current of five Ops (really just a pair of colored, numbered cards that indicate how many and what kind of cards the team will need to discard), it can be executed following a round of Events. It’s almost laughable to call them events, because they’re really just unexpected penalties and discards. Make it through, and if there was any time left on the clock from the preparation round there’s a bonus. It all ends if any player loses all of their health from failing skill checks or random events.

If you haven’t already sorted it out, I’m not very impressed by a game that calls itself the “Navy SEALS Card Game” that boils down to lots of card drawing and discards, occasionally showing you a picture of an assault rifle on a card. I really admire Mr. Fitzgerald’s attempt at bringing in historical missions with included descriptions and as a highly abstract, family card game it might be successful with some groups look for a low friction, low commitment card game. That said I’m not quite sure why it needs 40 pages of rules, even if it is a small format book.

It’s also a fairly easy game although there a couple of ways to increase the difficulty. But they’re silly- take one less health at the beginning or whatever. The missions are all more or less the same, just requiring different discards. One or two have some minor alterations, like an Insertion card that comes up or that handicaps one of the team members since they’re protecting a hostage.

The moral of the story here is to keep in mind that this a US Games System game designed by Mike Fitzgerald. That means it’s simple, abstract, traditional card game with pictures on the cards. It fits that description to a T, but Mr. Fitzgerald has done better designs and frankly there are better co-op games in this class that offer more value and more compelling gameplay. Whatever you do, don’t go into Hooyah expecting to come out feeling like you were a member of SEAL Team Six.