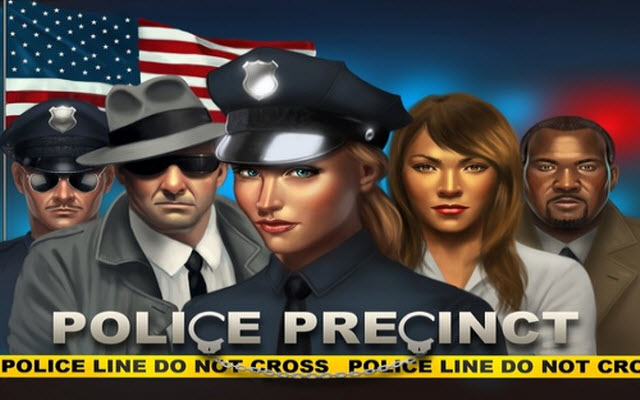 Amateurish graphic design and completely uninspired mechanics largely borrowed from other successful games ought to be enough to sink a new board game title- particularly when it’s yet another co-op at a time when that genre has become tiresome and repetitive beyond its absolute top examples like Battlestar Galactica. Common Man’s Police Precinct, designed by Ole Steiness, evidences all of the above. There isn’t anything on offer at a design level that you can’t do in another game. You’ll cooperate with fellow players to control spawning bad guys, roll dice at objective cards, and race against a timing mechanic to complete a common task. There may or may not be a player secretly working at cross purposes, who can interfere in subtle ways or reveal themselves.

So why would I wholeheartedly recommend a redundant and unoriginal game with ugly art? Because, put quite simply, Police Precinct is a charming fun-first design with a seldom-used modern law enforcement theme. It’s a game that has a sense of unpretentious fun coupled with an uncomplicated process that never gets in the way of the good stuff- player interaction, shared narrative generation, and lots of laughs.

Each player gets a cop rated for their ability to conduct investigations, arrest street punks, and handle emergencies along with two special abilities. Each officer is represented on the city map by a car, which can be either an unmarked car or a patrol car with full livery. There’s some simple detail- patrol cars can move faster, unmarked cars get a bonus during investigations. Over the course of the game, the cops can earn donuts that can be spent for bonuses or to purchase permanent upgrades to their abilities.

Event cards drawn every turn typically depict emergencies throughout the city ranging from domestic disputes to traffic accidents to axe-wielding maniacs menacing the donut shop. All have a target number that must be rolled among a player’s dice pool, but some have an Unknown Circumstances chit placed on them. So you may not know going in that the Internet Hacker you’re trying to bust has an angry dog. Or a bomb. Players can pitch in Police Cards with the emergency symbol to add dice to another player’s roll. Emergencies occur in colored suits, and when a second emergency of a given color appears the previous one is marked urgent. If the urgent situation isn’t handled by anyone, it can increase an overall City Crime marker that will eventually end the game in a loss for John Law.

Busting the street punks means pulling up in a bad hood and rolling dice with the target being greater than the number of hoodlums on the street. There is an overrun mechanic whereby four or more street punks form up into a game-altering gang. There is a finite supply of street punks, and as the supply exhausts that City Crime marker increases.

The third major player function is to investigate a murder. This is sort of the game’s overarching narrative and primary goal. In order to catch the killer, players need to find 11 evidence cards from four decks of representing forensic evidence, witness interrogation, crime scene evidence, and locating the murder weapon. When a player investigates, they draw cards equal to their skill plus any cards played from other players, placing evidence cards on a display. Toward the end of the game, the murderer makes a round trip of the board and leaves, ending the game unless the players have all of the evidence and successfully make the collar in a routine arrest attempt.

There’s a lot of fun to be had in delegating tasks and helping your fellow officers by playing cards and coordinating strategies. However, playing the game in its standard configuration is also too easy for seasoned co-op players that will grasp as early as the first game that piling resources into drawing from the evidence decks to mine out those cards as early as possible is the best way to win- provided that the emergencies and street punk population are kept in check. There’s also very little risk throughout most of the game as failed emergencies either have no effect other than staying on the board or possibly sending your officer to the hospital, losing a couple of Police Cards in the process. It’s hardly on the level of Ghost Stories in terms of challenge, although the difficulty can be adjusted by shifting a couple of setup parameters and rules. The relaxed difficulty, however, might make this game a good option for families playing with young children.

The better solution to the game’s sometimes oddly frictionless gameplay is to play the game with the optional dirty cop rules. Like in every other co-op with a traitor, players get dealt loyalty cards at the beginning indicating whether you’re corrupt or not. The dirty cops can use some of the game’s abilities, rewards, and card effects to secretly stash evidence cards at the bottom of investigation decks or manipulate emergency cards to increase the frequency of their expiration. And of course, there are ways to reveal the dirty cop or cops, and the traitor can also reveal themselves to wreak mayhem on the honest players by playing- get this- dirty donuts. I haven’t tried it, but I’m thinking a six player game with two dirty cops would be pretty awesome- and definitely more of a challenge.

You’ll likely hear a lot in the coming weeks from armchair reviewers, bloggers, and various sources that the game is “dripping with theme”. It really isn’t. The theming- although relatively unique in the marketplace right now- is almost entirely executive and the game could be about any kind of subject where characters overcome dice-based challenges, control spawns, and look for objectives to complete a larger goal. It could be a western, fantasy, or horror game with nothing more than a full palette swap. With that said, I absolutely love that the game has a modern police theme and that alone is why I contacted Common Man with an interest in reviewing the game. It’s a lightly applied theme, but it works with the mechanical content and it is hugely appealing. The hostile employee with an assault rifle may as well be a disgruntled Orc with a club, but I find the “real world” setting more appealing than bland fantasy.

There’s a lot to recommend Police Precinct, apart from its creepy, over-shaded artwork and so-what mechanics. I’ve had a lot fun playing the game both in solitaire and with a group and that is what separates a good game from a bad one. Mr. Steinness’ design doesn’t really run afoul of most of my “bad review” triggers, and I appreciate that his effort was chiefly focused on making a fun, accessible game with a cool theme. Gamers that are over the whole co-op thing may shrug the whole thing off while others might retreat to Shadows Over Camelot, Galactica, Arkham Horror or one of the other popular options. But Police Precinct is simpler to play than those, and there isn’t another game of its type where you get to hum the Hill Street Blues theme throughout your turn.