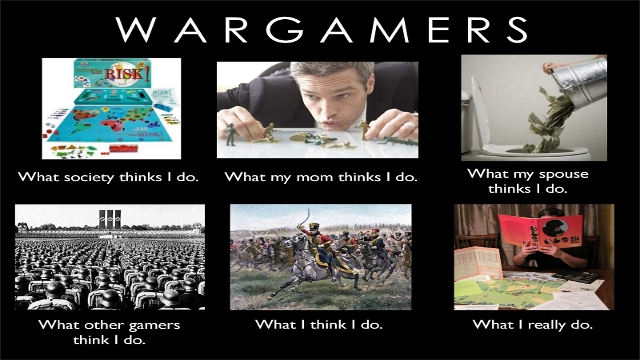 One of the things I love about NoHighScores is the fact that it’s a game site on which staff and users remember that the word “games” has a much, much wider reach than your nearest computing device. But since starting to scuff my shoes here on a regular basis, there’s at least one major genre that seems to be missing from the coverage, and that’s historical wargames.

That’s not entirely surprising. Although wargames are one of the most easily-defined sub-genres of the board game world they have pretty much zero penetration into the wider hobby consciousness. The cartoon at the top says it all in terms of misconceptions about this sector of the hobby. And the hobbyists don’t help themselves either. Wargamers put an emphasis on simulation in their designs and that often means games that are two-player only, immensely complex and long-playing with huge downtime. The infamous Campaign For North Africa is the ultimate example of this trend, with a three volume rulebook, 1800 counters and a 1500 hour play-time. Given the focus on re-fighting historical battles a desire for simulation is perhaps understandable. What’s less so is the apparently conservative mindset of a lot of wargamers who started out on the hobby in the 70’s and seem to want to see endless minor variations on world-war 2 eastern front “panzer pusher” games and who insist on using impenetrable military and historical jargon that’ll put off experienced board gamers from other spheres who might feel qualified to tackle the rules sets these things demand. For evidence you need look no further than the primary internet gathering place for wargamers, Consimworld, which uses an interface so arcane that even people who braved the bulletin boards and newsgroups of the very early web find it hard to navigate.

And yet none of this really need be the case. The manner in which this hobby segment actively turns off new recruits is long recognised and lamented by the more forward-thinking designers and commentators in the sector and there has been an active, and growing movement over the past ten years to learn some design lessons from other sectors of the hobby and push out some clever and innovative designs that extract maximum simulation value from minimum rules and play time alongside the traditional eastern front fare. Indeed, given the relatively stagnant state of European-style game design right now, and the manner in which American-style design is dominated by a very small number of big publishers, I’d say that modern wargames are currently at the cutting edge of game design. If you don’t dip your toe into this market from time to time, you’ll be missing out on some seriously interesting games.

So if you’re going to take the plunge into this sticky and potentially impervious morass, what’s a good place to start? Well the first thing to say is that a big part of the pleasure in playing wargames is in picking titles that represent some history that interests you, and that should be your first winnowing point. If you want to re-live the sort of personal stories of modern warfare that make up the bulk of TV and films about war then you’ll want to pick a small-scale (tactical) level game about a 20th century conflict. If you’re in to cable TV documentaries about ancient generals then take a look a mid-scale (operational) games set in the ancient world. If books about economic and social history during warfare sound more your thing then you’ll probably want a top scale (strategic) game, perhaps from the Napoleonic or American Civil War era. Partly thanks to the manner in which one designer can invent a mechanical basis for a wargame, and others can adapt it to battles that interest them from roughly the same period the palette of potential wargames is huge.

Given this advice and the enormous diversity of games on offer, it’d be hypocritical of me to say I can offer you a basket of catch-all introductory wargames to suit all-comers. Rather I’m just going to focus on a small handful that are both suitable for new players and belong in that small basket of highly innovative designs that I mentioned earlier in the article. You should be able to teach and play most of these games to completion in a 2-4 hour session, and all but one allow for multiple players in addition to the more traditional two.

My first pick is the Conflict of Heroes series from Academy games, and its first on the list not only because it’s brilliant but because it was tailor made as an entry point into the hobby. It’s a tactical level game played on a traditional hex map with traditional counters representing a squad, a tank or a weapon team but there’s nothing traditional about the component quality. Instead of the paper maps and flimsy two-tone counters you’ll find in most wargames, all these games have mounted boards and big, thick, ready-punched counters lavished in glorious 3D artwork. The rules may look daunting at first but they’re introduced piecemeal for easy digestion and you can jump in and play several of the scenarios after just the first few pages. It’s also worth remembering that tactical games are usually fairly complex due to the level of detail they need to represent and Conflict of Heroes does an excellent job of jettisoning all the extraneous rubbish and focusing down on a system that is exciting, challenging and which strikes an enviably brilliant balance between randomness and depth. Again, unlike usually plodding pace of tactical games, which stands in stark contrast to the adrenaline-fueled action they purport to depict, these games are very fast playing with minimal down time. Currently there are two editions of this game, set in different times on the Eastern Front, but more are planned across several fronts of World War 2, and possibly extending to other modern warfare theatres as well. 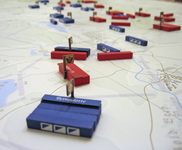 Next up we have a game that I once stated was the best-looking game in the world, ever, thanks to the manner in which it mimics the map layout of a battle that you might see in the tent of an eighteenth century general, Napoleon’s Triumph from Simmons Games. This title also gets another top accolade from me, as I reckon it, and it’s younger sibling Bonaparte at Marengo are possibly the most innovative games I’ve ever seen. They share a basic concept of having units printed on wooden blocks that you can then turn away from the enemy to create a fog-of-war effect with a large number of other, more venerable wargames but other than that I have difficulty spotting where designer Bowen Simmons could possibly have got the rest of his ideas from. Indeed it’s such an unusual system that I’m going to cop out and not even attempt to describe how it works: suffice to say that it’s a completely non-random and truly fiendish combination of chess and poker that leverages the hidden information of what units are where to create a fantastically deep game that’s nevertheless filled with nerve-wracking bluffs and evasions. It also manages to elegantly model the slow breakdown in command and control that was such a feature of pre-radio warfare. But that level of invention also works against the game: it’s not complex by any means but it remains tough to learn due to a lack of familiar concepts to latch on to. However, to miss out on a game of such startling brilliance over that small hurdle would be a tragedy. If you don’t fancy the Napoleonic theme the designer has a new American Civil War game based on the same system, Guns of Gettysburg, out later this year. 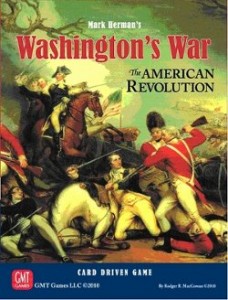 compelled to add. It belongs to a popular sub-genre called card-driven games (CDG’s) which also contains my favourite game of all time, Twilight Struggle (which is arguably not a wargame and so didn’t make the list on its own right). Indeed Washington’s War is a redevelopment of the very first CDG that kicked off the whole shebang, We The People, long out of print and now a collectors item. Both are probably best understood as political control games with a warfare element in which players vie to spread their influence across the map, using generals to force their way through choke points where the population doesn’t agree with them. That’s partly what makes it suitable for new players. Another thing is the incredible 90 minute play time which is virtually unheard of for any kind of meaningful wargame. And in those ninety minutes you have the pleasure of endless strategic puzzles as the game state slips around wildly before you, and you worry about whether or not now is the right time to launch that offensive, or play that powerful event, or whether you wait and see if it’ll be your opponent trying to dictate the play in any given round. The game is much less prone to scripting and pre-tried patterns of play than most other CDGs and also benefits from being massively asymmetrical, with the ponderous but tremendously powerful professional British armies trying to pin down and destroy the weak but nimble American patriots. That asymmetry requires some rules weight, and the rule book isn’t the best, but if you spend the time with this one not only will you have gained the knowledge of how to play one of the best wargames ever made, but it’ll put you in good stead for most of the other titles in this genre, many of which are outstanding. If you want a bit more on this one, I reviewed it over at the Fortress last year.

Last but not least is a pair of relatively obscure games covering especially obscure bits of already obscure wars, Friedrich and Maria. I feel compelled to talk about them both not only because they’re closely related mechanically and from the same designer but because Fredrich, the only one I’ve played, is now out of print and hard to find so I offer Maria which I admittedly know a whole lot less about, as a possible replacement. One of the interesting things about both these games is that unlike a lot of wargames that accommodate multiple players almost as an afterthought, in these two it’s the crux around which the game is built. In Friedrich this takes the form of a 3-4 player game in which one player takes Austria and the others are placed in the interesting position of needing to collaborate to defeat him whilst struggling for an individual win, setting up some deliciously treacherous dynamics. Maria on the other hand is three player only but comes with a highly acclaimed diplomatic system to govern diplomacy. The other particularly interesting thing about these games is their combat system which revolves around ordinary decks of playing cards, with local terrain determining what suite needs to be used for the battle resulting in a fascinating interplay between on-board maneuver and hand management.

This is already a long article, likely to be of interest to a limited number of readers so I’ll avoid a lengthy conclusion. Suffice to say that the board gamers amongst you owe it to yourselves to try at least one of these games. And if none of the suggestions appeal in terms of subject matter, well, do feel free to ask for more.